“The Korbel American Ski Classic is the premier event of the ski season,” explained Michael Imhof, Vice President of Sales and Operations for the Vail Valley Foundation. “We look forward to another great year of the competition and camaraderie that has long been the foundation of this event.” 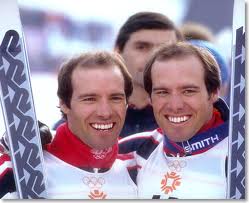 Phil and Steve Mahre during their heyday in the 1980s.
Mahre Training Center
mahretrainingcenter.com

The festivities off the racecourse will be equally enjoyable, with the weekly Bud Light Street Beat free concert, featuring Robert Randolph & the Family Band; the Hold ‘Em for Hope benefit dinner and auction and the Legends of Skiing Banquet.

“The Korbel American Ski Classic is a true celebration of the sport of skiing,” continued Imhof. “At the end of the day, it's all about having fun, which is the true essence of skiing.”

The Korbel American Ski Classic will kick off on Wednesday, March 23, with the Conway Cup Community Team Race, presented by Korbel. The race is named and run in memory of Dan Conway, a great friend to ski racing at all levels throughout the Vail Valley and will feature 45 four-member teams of local racers, competing in a dual race format, with one team earning the right to advance to a spot in the Korbel Ford Cup celebrity team competition March 25-26.

Up next on the race schedule will be the Volvo Legends Giant Slalom on Thursday evening, March 24, a head-to-head competition, featuring some of the greatest names in ski racing history. Past Olympians and World Champions will rekindle old rivalries on the racecourse as five generations of skiing legends collide for the right to once again stand on the top step of the podium.

The legends will need to rein in their party instincts to a certain extent, however, as they move into the role of team captains for the final two days of the Korbel American Ski Classic as the Korbel Ford Cup celebrity team competition takes center stage at Golden Peak on Friday, March 25, and Saturday, March 26. Five-member teams will attempt to work their way through a maze of head-to-head competition over the course of the two days, emerging with not only the team title, but a year's worth of bragging rights to boot.

Participants and guests will once again have the opportunity to showcase their casino prowess Friday evening as the fourth annual “Hold ‘Em For Hope” benefit dinner and auction headlines the evening's festivities. Hosted at the Vail Marriott Mountain Resort & Spa, Hold ‘Em For Hope will feature a Las Vegas-style buffet, live and silent auctions and a wide array of casino games. Ticket and auction proceeds from the evening will benefit the overarching mission of theVail Valley Foundation.

A very special ceremony will round out the Korbel American Ski Classic social festivities Saturday evening as the greatest ski racing family duo the U.S. has ever produced is honored as Phil and Steve Mahre are inducted into the International Ski Hall of Fame at the Legends Banquet.

Over the course of their nine-year careers on the White Circus, Phil and Steve accounted for a total of 36 career World Cup victories, 27 for Phil and 9 for Steve. In addition, Phil earned a trio of consecutive Overall World Cup titles, while the duo shared three Olympic medals and a pair of World Championships medals.

The 1984 Olympic Winter Games in Sarajevo, Yugoslavia would prove to be both a career highlight and an encapsulation of the Mahres' racing careers together as Phil mined gold in the Olympic Slalom, while Steve collected the silver, just 21-hundredths of a second behind his brother and best friend.

Ironically, their World Cup careers would come to an end in March of 1984 in Vail during the American Ski Classic, as Phil and Steve retired from the U.S. Ski Team and World Cup racing, wanting to spend more time with their families.

The 2011 Korbel American Ski Classic is a project of the Vail Valley Foundation. For additional information on the Ski Classic or the Foundation, contact (970) 949-1999 or visit www.vvf.org.

Congrats to Phil and Steve for well deserved recognition at the 2011 Ski Classic and International Ski Hall of Fame induction. As a long time volunteer for disabled Olympic Gold Medalist Bill Johnson I would like those honoring Phil and Steve to know that both have been very active in supporting Bill and his family since Bill's 2001 traumatic brain injury, making the Mahres true sportsmen, Olympians and World Champions in every sense of these terms. Last year it took but one email to Phil for him to agree to appear in CT on short notice for a fund raiser for Bill. Phil raised additional funds on his own initiative at the 2010 Legends event, and again during the 2011 Sundance Film Festival, Park City, where he hosted the new Ski Channel Zeke Piestrup film, "Downhill: The Bill Johnson Story", in a Park City church. Both Phil and Steve have agreed when possible to make themselves available to volunteers for future events benefiting Bill and family.

In an age when the Olympic Creed easily gets lost
in Olympic media hype, and honor and fair play in sport seem less valued than in the past, Phil and Steve Mahre have proven time and again through their skiing careers that these values can and should be honored. They have been and always will be uniquely rare sport champions and community role models for young and old alike throughout the world. Many thanks to them both for inspiring us.