Such will be the case Thursday, July 22, as the guitar virtuoso brings his “Live…By Request Tour” to Beaver Creek for an 8 p.m. show at the Vilar Performing Arts Center. Fans only need log on to Lang's website, www.jonnylang.com, click on the “Tour” icon and fill in the blanks. 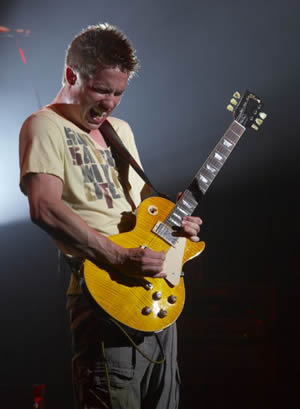 “This show will mark Jonny Lang's third appearance at the Vilar Center,” offered Kris Sabel, Executive Director of the Vilar Center, “and each time he has left audiences wanting more. This ‘Live by Request' format is a great concept that allows fans in each city to tell Lang what they are most interested in hearing so I hope you will take this opportunity to share an evening with this incredibly talented young man. And by all means, go online and request your favorite songs.”

The band moved to Minneapolis and independently released the album “Smokin'” when Lang was fourteen. He was signed to A&M Records in 1996 and released the critically acclaimed multi-platinum “Lie to Me” the following year.

The next album, “Wander this World”, was released in 1998 and earned a Grammy nomination, while 2006's gospel-influenced “Turn Around”, won Lang his first Grammy Award.

In more than ten years on the road, Lang has toured with the Rolling Stones, Buddy Guy, Aerosmith, B.B. King, Blues Traveler, Jeff Beck and Sting. In 1999, he was invited to play for a White House audience, including President and Mrs. Clinton. In 2004, Eric Clapton asked Lang to play at the Crossroads Guitar Festival to raise money for the Crossroads Centre Antigua.

At Crossroads, Lang was on the bill with many of the greatest of the living guitar greats. Although he was the youngest picker onstage, he wasn't intimidated.

"I don't know if 'intimidating' is the word,” Lang pondered, “but it was definitely a reality check. If there was a level of competition in my mind, I would be intimidated but I don't really think that way. It's pretty much just about having fun and trying to help the audience have a good time."

The “Live…By Request Tour” is a follow up to Lang's April release of his first ever live recording, "Live at the Ryman".

“The Ryman is one of those magical places where you just can't help but be inspired”, explained Lang. “I think a lot of that magic and inspiration makes its way onto this recording. It's a collection of some of the best songs from our studio recordings, only more energized, thanks to a great group of musicians and a very receptive live audience.”

At 29, he is the same old Jonny Lang, that same boyish-looking dude with the ripped jeans, spiky hair and well-worn T-shirt. But, 15 years into his career, Lang is at crossroads: he split with his longtime Nashville manager last fall, he doesn't have a record label for the new album he's recording, and his wife is seven months pregnant with their third child.

"I've become a better listener,” concluded Lang, “listening to the other musicians and trying to incorporate myself into the band as a whole, rather than being just the front guy."

i love cougars that is why i love to watch Desperate Housewives and also Cougar Town“ https://www.HubJOKER888.com

Well said. I never thought I would agree with this opinion, but I’m starting to view things from a different view. I have to research more on this as it seems very interesting. One thing I don’t understand though is how everything is related together. https://Parisclub888.net

You need to experience a tournament for just one of the finest blogs on the internet. Let me suggest this web site! https://55xo.co

I really like your site.. excellent colorations & motif. Would people design and style this fabulous website your self or would you actually hire an attorney to acheive it available for you? Plz answer while I!|m trying to style my own website and would choose to learn wherever ough acquired the following coming from. thank you NOVÝ ZÉLAND VÍZOVÉ POŽADAVKY

After study several of the blogs for your site now, and i genuinely appreciate your way of blogging. I bookmarked it to my bookmark internet site list and will also be checking back soon. Pls look at my web page as well and figure out what you believe. 스웨디시 사이트

when we do our home renovation, we always look for new home styles and designs on the internet for some great ideas., Թուրքիայի տուրիստական ​​վիզա

I truly appreciate this post. I have been looking all over for this! Thank goodness I found it on Bing. You’ve made my day! Thanks again 꽁머니 토토

It was hard to get a grip on everything, since it was impossible to take in the entire surroundings of scenes. 메이저사이트

i love watching movies specially when you have Vinn Diesel on it. Race To Witch Mountain is a classic alien movie“ บาคาร่าออนไลน์

You should participate in a contest for probably the greatest blogs on the web. I will recommend this site! INDICKÉ VÍZOVÉ POŽADAVKY

I see that you are using WordPress on your blog, wordpress is the best.:-’*” Αίτηση για βίζα της Τουρκίας

I am typically to blogging and i actually appreciate your website content continuously. The article has truly peaks my interest. Let me bookmark your internet site and maintain checking for brand spanking new data. 꽁머니사이트

Have seen and heard about such an insect for the first time. I really like knowing about various types of insects and animals. The life cycle of the insect shared in here seems to be very interesting. Will look forward to more such interesting posts. Энэтхэгийн виза мэдүүлэг

The following time I read a blog, I hope that it doesnt disappoint me as much as this one. I imply, I know it was my choice to read, however I really thought youd have one thing fascinating to say. All I hear is a bunch of whining about something that you could repair if you werent too busy in search of attention. 먹튀사이트

when we are looking for apartment for rents, we usually choose those with very clean rooms” 꽁머니

Usually there are some fascinating time limits in this post however I don’t know if they all center to heart. You can find some validity however I will take hold opinion until I explore it further. Good article , thanks therefore we want extra! Put into FeedBurner as properly 안전놀이터

We are a group of volunteers and opening a new system in our community. Your web site given us with valuable information to work on. You’ve done an impressive job and our entire community will be grateful to you. Aplikasi Online Visa AS

Hey dude” what kind of wordpress theme are you using? i want it to use on my blog too .  강남아가씨

Only aspire to mention ones content can be as incredible. This clarity with your post is superb and that i may think you’re a guru for this issue. High-quality along with your concur permit me to to seize your current give to keep modified by using approaching blog post. Thanks a lot hundreds of along with you should go on the pleasurable get the job done. 무직자작업대출

Many thanks for sharing this fine piece. Very interesting ideas! (as always, btw) VISUMVEREISTEN VS

I appreciate your wordpress template, wherever did you get a hold of it through? Canada visumansøgning online

Interesting website, i read it but i still have a few questions. shoot me an email and we will talk more becasue i may have an interesting idea for you. Mini Skate Park

Seen the whole article content. There are a little bit of really informative info here. many thanks. “Brilliance is typically the act of an individual, but incredible stupidity can usually be traced to an organization.” by Jon Bentley.. seedbusinesses.com/กล้องวงจรปิดและอุตสาหก/

I not to mention my friends were found to be going through the excellent tips from your web page and so all of a sudden came up with an awful feeling I had not expressed respect to the web blog owner for those strategies. Those boys had been so passionate to see all of them and now have unquestionably been making the most of them. Many thanks for truly being really accommodating as well as for deciding on these kinds of nice tips millions of individuals are really desirous to learn about. Our own sincere regret for not expressing gratitude to you sooner. click here – alternative medicine institute กล้องวงจรปิดไร้สายดูผ่านโทรศัพท์

my sister has a dancewear that is full of glitter, it looks cheeky but nice- scoobysnax liquid

From all the blogs I’ve read lately, this at one seems to be the most moving – it gave me something to consider about. [Reply] https://onohosting.com/affiliate-program

Awesome article, it was exceptionally helpful! I simply began in this and I'm becoming more acquainted with it better! Cheers, keep doing awesome! Mayumba National park

Thanks, that was a really cool read! Formation Gestion d'entreprise en Ligne

I recently came across your blog and have been reading along. I thought I would leave my first comment. I don't know what to say except that I have enjoyed reading. Nice blog. I will keep visiting this blog very often. interior design courses online free

Hello I am so delighted I located your blog, I really located you by mistake, while I was watching on google for something else, Anyways I am here now and could just like to say thank for a tremendous post and a all round entertaining website. Please do keep up the great work. https://startupo.fr/course/193/