RealAspen News and Community Content Feed
By Real Vail
November 14, 2012
The Vilar Performing Arts Center in Beaver Creek is pleased to announce that tickets are on sale to the public for its full winter season. Expanding upon an already-vast winter season, the 15th Anniversary milestone season promises to be the biggest yet, with big names and top talent coming to the valley between December and April in the categories of concerts, Broadway, dance, classical, family shows and comedy.

Among the biggest names this season will be Michael Bolton, Linda Eder and The Beach Boys in December, followed by Lewis Black in January, whose comedy act has quickly sold out at the VPAC in previous seasons.

“For our 15th Anniversary Season, we’re celebrating with some new names, as well as some old favorites that valley residents and visitors have asked us to bring back,” said Kris Sabel, Executive Director for the Vilar Performing Arts Center. “This is one of our favorite times of year, as we release our schedule and receive feedback on the shows our fans can’t wait to see. We look forward to ramping up our show schedule in the coming weeks.” 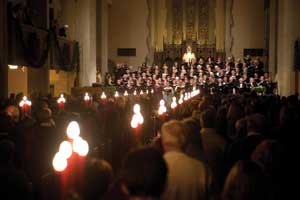 The VPAC will also pay tribute to legendary icons Michael Jackson and the Beatles with two top-performing tribute bands – Who’s Bad and 1964 the Tribute, respectively – in January. Other valley favorites such as SPAMALOT in the Broadway category and comedy pet acts in the family category are back by popular demand.

And while many familiar names are on the list, some less familiar artists are making their way to the stage as well, including quirky folk trio The Shook Twins, rising folk superstars Delta Rae, and modern jazz vocalist Cyrille Aimée. While the names may be less familiar, the VPAC promises an amazing experience from every performer that takes the stage this winter.

“We’re thrilled to bring an element of the unexpected to the VPAC this winter with our artists. I encourage people to step out of their comfort zones this winter and come witness some incredible shows,” said Sabel. “And what’s more, we’re about to announce a huge name to our series that we hope will blow everyone away. It’s the biggest name to come to the VPAC yet, and we’re delighted to be able to recognize our 15th Anniversary with a major show.

Details on that big show and a other performances that have yet to be announced will be released soon; tickets for all other performances are on sale now and available online at vilarpac.org, by phone at 970.845.TIXS or in person at the VPAC Box Office in Beaver Creek.