Vail’s Dobson Arena transforms on New Year’s Eve, boasting the biggest dance floor in Vail and what is, hands down, the hottest party in town. With DJ Logic getting the party started and Thievery Corporation rocking the crowd into the New Year, Vail NYE 2013 is guaranteed to be a New Year’s experience guests will not soon forget.

Eric Hilton and Rob Garza, the DJ duo behind Thievery Corporation, cite a plethora of different influences for their musical style, which explains why it’s hard to put them in just one genre. Since the formation of the band in 1995, Thievery Corporation has released six studio albums and has been nominated for a Grammy. The duo enlists the help of numerous supporting artists, from vocalists to guitarists and more, to add a full sound to the music they create. The full band will be in Vail for their Vail NYE 2013 show. 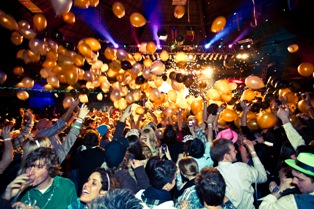 Beside rocking out at an epic concert from Thievery Corporation, guests at Vail NYE 2013 can expect to ring in 2013 with a massive balloon drop, confetti storm, midnight champagne toast, awesome New Year’s party favors and much more.

Tickets for Vail NYE 2013 will go on sale at 12 a.m. on Wednesday, Oct. 3 at www.VailNYE.com and will be sold at four levels, starting at just $75. Ages 21 and over are welcome at Vail NYE 2013. All ticket levels include access to the evening’s entertainment as well as added VIP amenities. Get more details on available tickets, benefits and pricing online at www.VailNYE.com.

It is anticipated that this event will sell quickly, so those interested in attending are encouraged to buy tickets early. All ticket prices will increase on Dec. 17. For more information on the event, visit www.VailNYE.com or check out the event Facebook and Twitter pages at www.facebook.com/vailnye and www.twitter.com/vailnye.