Vail announced recently the lineup of entertainment for Vail Snow Daze 2012, the resort's annual festival to kick off the winter season. The lineup will include headliner concerts from Wilco on Dec. 15, Michael Franti & Spearhead on Dec. 14 and The Shins on Dec. 13. Vail Snow Daze takes place Dec. 10-16, 2012 and is part of Vail's 50th anniversary celebration.

Founded in 1962, Vail will celebrate its golden anniversary throughout the 2012-2013 winter season and into the summer of 2013 with a series of events, parties, a film documenting the first 50 years, concerts and more. The celebrations will incorporate a 50th anniversary theme to recognize the resort's distinct past, present and future. As part of Vail's big birthday bash, Vail Snow Daze boasts the biggest lineup of entertainment in the event's multi-year history.

Grammy-nominated indie rockers The Shins come to Ford Park in Vail on Thursday, Dec. 13 to kick off the Vail Snow Daze festivities. Well known for their songs “New Slang” and their current hit single “Simple Song,” The Shins have a melodic sound that is a guaranteed crowd pleaser. 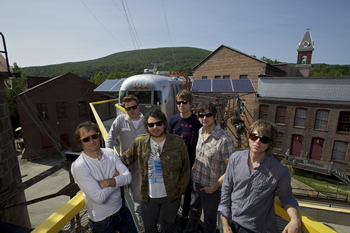 For more than 20 years, Michael Franti has been mixing rock, rap, reggae and other musical styles into a singular sound that keeps the crowds groovin'. Well known for massive hits “Say Hey (I Love You),” “The Sound of Sunshine” and “Hey Hey Hey,” Michael Franti & Spearhead's show in Vail on Friday, Dec. 14 in Ford Park is sure to rock the house.

Grammy-winning alt rockers Wilco will headline Vail Snow Daze on Saturday, Dec. 15. Known as a live music powerhouse, Wilco has released 10 studio albums to date. With a massive catalogue to pull from, these guys live to make noise. This is absolutely a show not to be missed.

“As Vail Snow Daze 2012 is part of Vail's 50th anniversary celebration this season, we wanted to make the event bigger and better than ever before,” said Chris Jarnot, Senior Vice President and Chief Operating Officer of Vail Mountain. “It's our way of commemorating Vail's birthday and saying thank you to our guests for 50 amazing years.”

In addition to the headliner concerts, Vail Snow Daze will feature events that celebrate Vail's 50th anniversary. On the evening of Friday, Dec. 14, guests are invited to attend the premiere of a full-length documentary film about Vail's rich history at the Vail Mountain Marriott Resort. Tickets for the film premiere are free, but a limited quantity is available. Visit www.vail.com/snowdaze to reserve tickets for the film premiere, which will be available beginning on Monday, Sept. 17. On Saturday, Dec. 15, Vail will officially celebrate its 50th year with a birthday party in Mountain Plaza. This birthday celebration will feature appearances from Vail dignitaries and original founders, a fireworks show and more. Admission to the birthday celebration is free and open to the public. Visit www.vail.com/snowdaze for more details on these events.

The schedule of activities for Vail Snow Daze 2012 will also include the return of the sponsor expo village and gear demos at the base of the brand new Gondola One Dec. 14-16 as well as après and after-dark parties in the Town of Vail throughout the week.

For more information on Vail Snow Daze, including the full schedule of events and ticketing information, visit www.vail.com/snowdaze.