Stephen Kellogg and the Sixers with special guest Aslyn kick off the first-time Bud Light Underground Sound concert series presented by The Dusty Boot. The first of seven shows in the concert series will take place at the Vilar Performing Arts Center (VPAC) in Beaver Creek on Sunday, September 19 at 7:30 p.m.

Stephen Kellogg formed The Sixers in Northampton, MA in 2003. To date, the group has released four records including 2007's Glassjaw Boxer which was named one of the “Top Five Records of the Year” by USA Today critic Brian Mansfield. 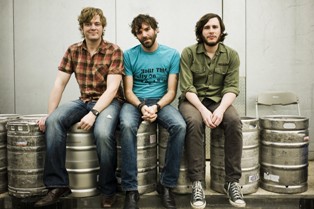 Stephen Kellogg and the Sixers will play the VPAC on Sunday to kick off the Bud Light Underground Sound concert series presented by The Dusty Boot.
By Megan Baker

Compared to the music of John Cougar and Counting Crows, Stephen Kellogg grew up listening to a mix of his dad's 1970's records and attending heavy metal concerts in the 1980's with his sister. Kellogg explains, "I'm as much a product of Whitesnake as I am of Jackson Browne. The beauty of The Sixers is that they don't have a problem with that."

When asked about the album The Bear, Kellogg said, "If I explained the entire story to you, it wouldn't be as fun to dive in and figure it out for yourself," says Kellogg. "I'm sorry but I just can't take apart every aspect of the music without taking something out of the soul of it... you'll have to experience it yourself and find meaning there."

The Stephen Kellogg and the Sixers show is a part of the Bud Light Underground concert series presented by The Dusty Boot. The new off-season series features concerts by soulful rocker Martin Sexton, jam band favorite Elephant Revival, Men at Work's Colin Hay and four other rising stars in roots music today. See all 7 shows plus enjoy 7 drinks for $98 with the fully transferable Underground Access Pass, only available until Sunday, September 19.

Tickets for Stephen Kellogg and the Sixers with special guest Aslyn are $25 and are available online at www.vilarpac.org, by calling 970.845.TIXS (8497) or in person at the box office in Beaver Creek.