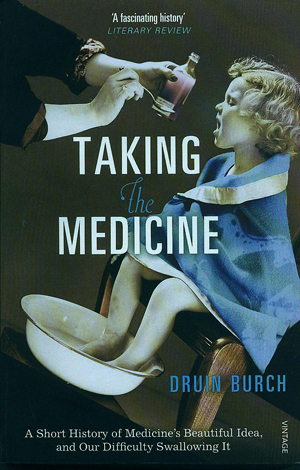 Taking the Medicine by Druin Burch
c.2009, 2010, Vintage Books - $17.95 / $25.95 Canada - 330 pages, includes index
Buy now from Amazon
You are bombarded with ads, but one caught your ear.The announcer on TV was talking about you - or so it seemed, since you just got your diagnosis. Your ears perked up: he was talking about something that could make you feel better, and it's available now.And then you heard the side effects: nausea, tinnitus, muscle weakness, tingling, and four hours or longer of… what did they say?Is the cure worse than the illness?

When you think about the cures our ancestors used, they seem quaint, if not laughable. Mesopotamian women, for instance, thought crocodile dung made a mighty fine pessary. Those daring ancient Egyptians believed that lettuce was an aphrodisiac. Think about that next time you order salad.

Still, pharmaceuticals had to start somewhere.

Though medical interventions can be dangerous, as Burch points out, somebody had to go first when trying procedures and potions; for instance, a very brave soul discovered one day that if you scratch the seed pod of certain poppy plants, then dry the resulting sap, you can smoke what's left and your pain will magically disappear.

But what led him to try it in the first place?

Burch says that the trial-and-error process was akin to finding something good to eat. The search for relief from suffering, though, was complicated by early scientists' reluctance to test medicines on animals before they subjected humans to “cures”, and by some ingested poisons that took a long time to kill, thus clouding the question of what worked and what didn't. Dosing was dicey, records were sketchy, and conclusions were guesswork more often than not. Still, doctors persevered in the name of medicine.And then the fabric-making industry got involved, as did explorers and missionaries, politicians and chemists. Physicians borrowed from other cultures and from history. Aspirin was safely manufactured around the turn of the century and heroin was sold as cough syrup, never mind the addictive properties. But by the time the world entered War, medicine was more “modern”, but still had a long ways to go…

Looking for a remedy for boredom? You'll find it here sometimes, and sometimes not.

While it's true that “Taking the Medicine” can be lively as a stimulant, there are parts that may make you feel sedated. Author Druin Burch starts at the beginning of humankind and moves forward in this story, but much of the history he relates is dry as a desiccant and much is a re-hashing of things that even the most casual of readers will already have seen in other books.Still, Burch injects a good dose of humor and a spoonful of I-didn't-know-that, which nicely balances the boredom and makes this an easy book to swallow.

If you've often wondered how the stuff in your medicine cabinet got there, check this out. “Taking the Medicine” puts the cure back in curiosity.

I love reading these kind of reviews online. I think I will rate the boomessays review ten out of ten. Really anticipating to read more of their reviews in the future!

This site called top research paper writing services changes my working life into similier. Now I cant imagine of working without this platform. I would give all five stars!

This site called homeworkhelpers need to be on top of the list. The reaosn is the quality of service which they provide is amazing. Highly recommended!

Hello guys! Thank you for the information in this post, I really appreciate it! But let me suggest you a cool essay writer service. I only made a couple of adjustments. They caught some instructions for the essay writing task that I didn't even notice. Definitely recommend. It was a very long essay, but they followed all the instructions, and even finished the work 2 days before the due date. Will write an essay with them again and again, so thank you so much!

From having high quality services to being environment friendly https://www.digitekprinting.com/coroplast-signs, this printing services has it all! Good thing my friend recommended me to them, now I'll never worry about the quality of my worksheets again!

I had read this book many times and according to me it's a highly recommended book as many of my friends from can natural CBD use this book for their guidance in the field of medicines.

I found this book quite interesting but the best thing about this book is they explain about the professional competitive intelligence service is just simply amazing highly recommended book.

Everything in weaver game animedle the content can be true if each of us knows how to apply and study it carefully. Let's create a healthy new world together. Thank you very much banks.

In Taking the Medicine, Naomi Wise offers a personal and heart-felt wordle 2 account of her battles with anorexia. This memoir is a fascinating look at the life of someone who has struggled with eating disorders.

My worldview was transformed by reading this book. It's a must-read for everyone curious about the medical system's rationale. Since the dawn of time, doctors and nurses have viewed the world in the same manner! They continue to utilize the same rationales. Anecdotes are intertwined with unexpected turns in this captivating book by the author. It was a fantastic experience for me pacman 30th anniversary. I don't want to give away too much information!

This is an excellent post I seen thanks to share it. It is really what I wanted to see hope in future you will continue for sharing such a excellent post. [URL=https://quordlegame.net]quordle[/URL]

stumble guys is a free download for both Android and iOS, clone or not. The fact that Fall Guys is now free to play appears to have increased its popularity and download volume. Its inclusion in the top 10 of both application stores demonstrates once more how popular it is becoming.