COPPER MOUNTAIN — After two hours of “progression” work, it's time to take the proverbial big leap inside the 19,400-square-foot building that houses Copper Mountain's Camp Woodward.

But instead of heeding the instructed mantra of positive visualization, my mind has drifted to the infamous opening scenes of ABC's Wide World of Sports. Like any child of the 1970s, the harrowing TV images of Vinko Bogataj's failed ski jump — a.k.a. “The agony of defeat” — is seared into my subconscious.

Now that jump turned iconic pop-culture moment has replaced the successful — and fairly simple — 360-degree spin I'm trying to visualize while staring down at the largest of three jumps that are the centerpiece of this veritable X-Games academy. 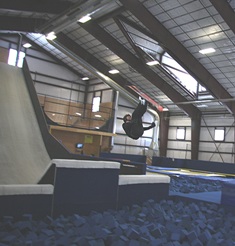 The author in mid-flight at Camp Woodward at Copper Mountain.

The good news is that no matter how bad I mess up, the consequences are minimal. Instead of the hardpack-snow that left Bogataj bruised and concussed, my ill-fated 360-turned-270 ends with a harmless sideways flop into a six-foot-deep pool of soft foam blocks.

The hardest part of the jump is extracting myself from this cushy landing surface. Five minutes later, I'm back at the top of the jump ready to fly again.

That's the beauty of Camp Woodward. Whether you're a genetically-gifted, 13-year-old Shaun White-wannabe with a real chance at X-Games fame, or a 40-year-old hack who wants to learn a trick that's beyond spread eagle or arm flap, there's a place for you here.

Introductory full-day camp sessions begin with 10 minutes of stretching, before transitioning to basic tumbling skills done on thickly padded floor mats. The day's first big lesson: When flipping, utilize the cowboy tuck with knees pulled away from your face.

“That way you won't hit your face with your knees,” explains instructor Peter O'Brien, a 24-year-old from Michigan who when not teaching inside the Woodward Barn can be found throwing any number of jaw-dropping tricks at one of Copper Mountain's three progressively more challenging terrain parks. Later in the day, when class moves outside to the slopes to apply what we've learned, O'Brien executes perfect front and back flips.

No one in our class of three (two 40-somethings and a 12-year-old from Kansas) is ready to attempt such tricks just yet. Instead we move from basic tumbling to bouncing on ultra-springy trampolines, further honing what Woodward day camp literature calls “aerial awareness.”

The idea is to get away from the “huck and hope method,” and instead provide structured progressive learning that helps build skills and confidence.

“It's a safer way to learn,” adds O'Brien. “You have the chance to perfect a trick before taking it outside where consequences go up.”

The trampoline session starts with simple bouncing, then progress to the point where all three students are comfortably performing front flips from trampoline into the adjacent foam pit. (In total, the facility's three landing areas are filled with 23,000 blue foam blocks.)

Next, ski or snowboard gear, including mandatory helmets, is strapped on, and each pupil takes several safety runs to get comfortable on the synthetic Snowflex surface, which feels like very stiff artificial turf. Once basic sliding is mastered, it's time to jump.

Flash forward, and after shaking off my “agony of defeat” fears and successfully completing several full 360s, O'Brien suggests I attempt a back flip. “The jump is perfect for it,” he assures. “Even if you land on your head you'll be fine.”

Turns out he's half right. There's nothing perfect about my jump, but after landing head first in the foam pit I am just fine. If only Vinko Bogataj could have trained at Camp Woodward.

Shaun White actually trained at Woodward along with other Olympians and othe X-gamers we know today and the Barn is actually 20,000 sq. ft. Woodward focuses on terrain park and pipe progression and here are some panoramic images for your virtual tour: http://www.mountainyahoos.com/TrainingCamps-Woodward-at-CopperMtn.html

You have done a commendable job by conducting such a program to help those affected by the social issues. This will be a great inspiration for the many similar companies to be involved in social activities like this. Keep doing the good works. cbd oil for stress relief

I haven’t any word to appreciate this post.....Really i am impressed from this post....the person who create this post it was a great human..thanks for shared this with us. www.MayUmbaNationalpark.com

It has fully emerged to crown Singapore's southern shores and undoubtedly placed her on the global map of residential landmarks. I still scored the more points than I ever have in a season for GS. I think you would be hard pressed to find somebody with the same consistency I have had over the years so I am happy with that. Formation Gestion d'entreprise en Ligne

I haven’t any word to appreciate this post.....Really i am impressed from this post....the person who create this post it was a great human..thanks for shared this with us. learn interior design

When you use a genuine service, you will be able to provide instructions, share materials and choose the formatting style. https://startupo.fr/course/195/

Excellent article. Very interesting to read. I really love to read such a nice article. Thanks! keep rocking. prodentim reviews

Pretty good post. I just stumbled upon your blog and wanted to say that I have really enjoyed reading your blog posts. Any way I'll be subscribing to your feed and I hope you post again soon. Big thanks for the useful info. reverse phone lookup