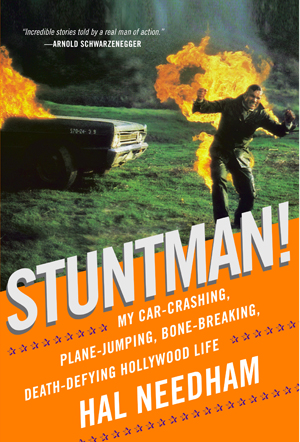 That's a hard lesson you learned once, long ago, when you jumped off the roof with a rectangle of terry-cloth tied around your neck. Likewise, flapping your arms will not allow you to fly and walking into a wall doesn't guarantee you'll go through it.

Several cuts, scrapes, maybe a broken bone later and you learned, but there'll always be a part of you that wishes you could have done cool tricks like in the movies. So read about a guy who lives the dream in “Stuntman! My Car-Crashing, Plane-Jumping, Bone-Breaking, Death-Defying Hollywood Life” by Hal Needham(c.2011, Little, Brown and Company - $25.99 / $28.99 Canada - 320 pages).

If you're a movie buff, you know how much you hate fakey stunts. Not only does your brain scream, “That's impossible!” but it ruins the film. Such was movie-going before Hal Needham began his career.

Needham was born in the hills of Arkansas, the son of a sharecropper. Life was hard: there was no running water in their two-room home, the family's meals came out of the garden or the nearby woods, and they moved a lot. Still, Needham says, it was all he knew then.

When World War II began, Needham's stepfather moved the family to St. Louis, where Needham learned to work hard. Though he was just ten years old, he brought money into the household, to the detriment of his education.

By ninth grade, Needham had left school and started working with a tree-cutting service because the pay was good and he was unafraid of heights. When he was old enough, he joined the army to fight in the Korean War and became a paratrooper. He also became a seamstress and a loan shark while in the service, and he met a man who was on his way to Hollywood.

That man hired Needham to jump from an airborne Cessna 150 airplane onto a galloping horse. And a stuntman was born.

Throughout his career, Needham worked with dozens of stars in dozens of movies, TV shows, commercials, and promotional films. He founded the first stuntman group to include women and minorities. His creativity changed the way stunts were done and movies were made.

And he broke fifty-six bones and his back – twice.

You know how you like to watch a really good, action-packed movie? Well, reading “Stuntman!” is like that, only better.

Author Hal Needham made his story as exciting as a stampede, as free-wheeling as a 10-story fall, and as funny as a Cannonball Run. He brags a bit (which he says stuntmen usually hate) and he drops names all over the place (something I usually hate), but it fits in this memoir, so I didn't mind here. I thought reading “Stuntman!” was a very different, surprisingly revealing, wildly fun way to spend some free-time, somewhat like sneaking off to a Saturday afternoon 99-cent matinee on a rainy day. The only difference is, the book lasts longer.

So take off your X-ray glasses and pass the popcorn. For movie buffs and daredevil wanna-be's, scoring “Stuntman!” is a pretty cool trick.

It is perfect time to make some plans for the future and it is time to be happy. I've read this post and if I could I desire to suggest you some interesting things or suggestions. Perhaps you could write next articles referring to this article. I want to read more things about it! Daniel Gordon GLD Partners

I think I have never seen such blogs ever before that has complete things with all details which I want. So kindly update this ever for us. Dr. Andrea Natale

This is also a very good post which I really enjoy reading. It is not everyday that I have the possibility to see something like this. Ross Levinsohn

I would recommend my profile is important to me, I invite you to discuss this topic... Visit Website

I like viewing web sites which comprehend the price of delivering the excellent useful resource free of charge. I truly adored reading your posting. Thank you! Visit Website

I have a mission that I’m just now working on, and I have been at the look out for such information Visit Website

Thank you for helping people get the information they need. Great stuff as usual. Keep up the great work!!! Visit Website

Great info! I recently came across your blog and have been reading along. I thought I would leave my first comment. I don’t know what to say except that I have. Visit Website

It proved to be Very helpful to me and I am sure to all the commentators here! Visit Website

Glad to chat your blog, I seem to be forward to more reliable articles and I think we all wish to thank so many good articles, blog to share with us. Visit Website

Always so interesting to visit your site.What a great info, thank you for sharing. this will help me so much in my learning Visit Website

It should be noted that whilst ordering papers for sale at paper writing service, you can get unkind attitude. In case you feel that the bureau is trying to cheat you, don't buy term paper from it. Visit Website

I like viewing web sites which comprehend the price of delivering the excellent useful resource free of charge. I truly adored reading your posting. Thank you! Visit Website

I want you to thank for your time of this wonderful read!!! I definately enjoy every little bit of it and I have you bookmarked to check out new stuff of your blog a must read blog! Visit Website

I’m excited to uncover this page. I need to to thank you for ones time for this particularly fantastic read !! I definitely really liked every part of it and i also have you saved to fav to look at new information in your site. Visit Website

Nice blog and absolutely outstanding. You can do something much better but i still say this perfect.Keep trying for the best. Visit Website

This is also a very good post which I really enjoy reading. It is not everyday that I have the possibility to see something like this. Visit Website

I’m excited to uncover this page. I need to to thank you for ones time for this particularly fantastic read!! I definitely really liked every part of it and i also have you saved to fav to look at new information in your site. Visit Website

Glad to chat your blog, I seem to be forward to more reliable articles and I think we all wish to thank so many good articles, blog to share with us. Visit Website

Luxury Slingshot Rental is a leading luxury car rental company which allows customers a stress-free car rental experience by providing excellent services. Slingshot is a 2-seat, 3-wheel wonder. It's classified as a motorcycle-auto cycle, but it's not, we simply call it street legal 3-wheel Kart. It's a 4-cylinder. It casts a unique design that promises a deluxe experience at prices that won’t break the bank.

I enjoyed speaking with you, I hope to read more reliable articles in the future and I think I speak for most of us when I say we are thankful for so many good articles, blogs to share with us. emergency locksmith

I remember sitting on the couch, eagerly awaiting for "Miami Vice", to come on, so I would get to see the Ferrari Daytona Spider and the beautiful Testarossa, Exotic Car Rental Miami