RealAspen News and Community Content Feed
By David O. Williams
Real Aspen – November 9, 2010
With President Barack Obama last week saying the GOP takeover of the U.S. House officially puts a fork in comprehensive climate change legislation, an interview of Robert Kennedy Jr. by David Roberts on Grist is must reading for anyone wondering about a path forward for meaningful energy policy reform.

Kennedy is the senior attorney for the National Resource Defense Council, president of the Waterkeeper Alliance and a fixture in the liberal-leaning, politically progressive Colorado town of Aspen. You may have heard of it. He also attended grand opening ceremonies for Vail's Blue Sky Basin, touted 10 years ago as the greenest ski expansion ever, although environmental protestors disagreed. 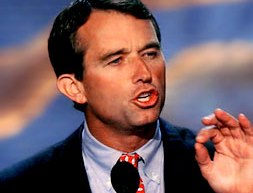 Roberts out of the gate asks Kennedy what backers of climate change/energy policy reform can and should be doing. And Kennedy starts off by saying Congress may have failed but there's plenty the Obama administration can do on its own:

“There are a lot of things that the federal government can do without going through Congress. Those are the lessons Bush and Cheney taught us. The Supreme Court has given the EPA the authority to put a price on carbon. We ought to be doing that. The administration also ought to be putting a cost on mercury from coal plants. They should altogether ban mountaintop-removal mining. They should try to force the carbon industry to internalize their costs the same way that they internalize their profits.

“Then the administration needs to help construct a national grid system that functions as a marketplace for renewable power. We need a marketplace that turns every American into an energy entrepreneur and every home into a power plant, that powers our country on what Franklin Roosevelt called “America's industrial genius.” We need a national program like Eisenhower launched in the 1950s and 60s to reconstruct our highway system and have it reach every community in the country.

“Right now we have a marketplace for energy in this country that is rigged by rules that were written by the incumbents to favor the dirtiest, filthiest, most poisonous, most destructive, most addictive fuels from hell, rather than the cheap, clean, green, abundant, and wholesome fuels from heaven.

But Kennedy's best answer is reserved for Roberts' next question about national policy failure:

“National climate policy is ultimately a victim of the national political calamity. What we're looking at is the tragic collapse of American democracy. A lot of it has to do with what's happening in the media. George Bernard Shaw said that a journalist is somebody who can't distinguish between a bicycle accident and the collapse of civilization. The Citizens United case was the collapse of civilization, but the media ended up covering the Ground Zero Islamic center and Juan Williams and Charlie Sheen and giving very little attention to the impacts of this momentous case.”

It should be noted that Real Vail has dedicated far more space to climate change policy than the Sheen-anigans of the highest paid actor on TV, Charlie Sheen – even though many of Sheen's allegedly alcohol- and cocaine-fueled activities have occurred in the nearby ski town of Aspen (sorry, that last bit was just for the search engines, Robert).

An analysis of key U.S. Houses races in last week's midterm election conducted by the grassroots environmental group 1sky.org found that Democrats who voted against the ASES (American Clean Energy and Security Act) climate bill were three times more likely to lose. In fact, 80 percent of House Democrats who voted for the climate bill last year won their races. The bill barely cleared the House and died in the Senate.

Salazar, a farmer from southern Colorado, consistently voted against energy and climate reform bills, including this year's CLEAR Act aimed at preventing on- and offshore oil spills.

He also initially supported Colorado Democrat Diana DeGette's FRAC Act, which was designed to provide more accountability and transparency in natural gas drilling, but he later opposed the effort despite polling showing overwhelming support in his district.

President Barack Obama, in a post-mortem press conference last week on the brutal midterm election that saw Democrats lose control of the U.S. House and barely hold onto the Senate, praised the so-called blue dogs in largely Republican districts who took courageous votes for the administration agenda despite the possibility of being thrown out of office.

In Colorado, that's exactly what happened to Salazar in CD3 and Betsy Markey in largely rural CD4. Markey, whom Obama recently praised by name on Jon Stewart's “The Daily Show” for taking tough votes, lost to Republican Cory Gardner.

But while Markey voted for Obama's climate change legislation, including cap and trade, Salazar – from an energy rich district — did not. At his press conference last week, Obama declared cap and trade all but dead. Asked if the U.S. Environmental Protection Agency should administratively regulate greenhouse gas emissions, Obama said the agency is under a court order compelling it to deal with the emissions in some way.

Saying the feds can't ignore the science on climate change, he went on to explain that cap and trade was “just one way of skinning the cat,” suggesting the incoming Republican Congress will have to work hard with Democrats to look at other ways reduce heat-trapping emissions.

The new wave of GOP lawmakers seems disinclined to work with Obama in any way, and they give little credence to climate change science. But that is not necessarily a view they share with young voters, many of whom may be reenergized to vote in the 2012 presidential election.

I found so many interesting stuff in your blog especially its discussion. From the tons of comments on your articles, I guess I am not the only one having all the enjoyment here! keep up the good work... Infinix hot 9

I wish more writers of this sort of substance would take the time you did to explore and compose so well. I am exceptionally awed with your vision and knowledge. ฝาก20รับ100

We are really grateful for your blog post. You will find a lot of approaches after visiting your post. Great work pg joker

Thank you very much for this great post. slot online

It might solidify best to ro with your dealing with postpartum depression without the need for paxil if you are strapped regarding it. belfast private airport transfers