Hickenlooper keeps cooling to the concept of climate change

Colorado Gov. John Hickenlooper's stance on climate change continues to retreat like so many of the world's glaciers.

“I'm not going to go out and say the sky is falling and that climate change is happening, but I'm very concerned about the risk of climate change,” Hickenlooper told a coalition of 22 southeastern Colorado counties at a public meeting last week, as reported by the Pueblo Chieftain.

The governor's comments echo some of the same language he used at the Colorado Environmental Coalition's “Rebel With A Cause” gala in May 2009, except then his views were a lot more clear.

“I'm not saying that the sky is falling. I'm saying that clearly the climate is changing, clearly mankind's activities are causing it,” Hickenlooper said back then. 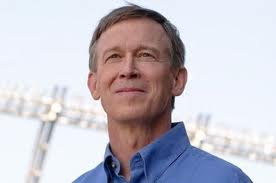 Now, Hickenlooper clarifies that he is concerned about the risk of climate change but he deliberately stops short of acknowledging climate change is actually happening.

Even before he ascended to the governor's office, there were questions as to whether Hickenlooper wears flip flops to the planet's climate change debates.

In February 2010, at the National Western Mining Conference & Exhibition in Denver, Hickenlooper raised eyebrows when he said, "I don't think that the scientific community has decided with certainty that climate change is as catastrophic as so many people think."

It was a surprising remark that caught many people off guard, including Beth Conover, the author of “How the West Was Warmed." Conover tweeted: "What the ... ?" Hickenlooper wrote the forward for her 2009 book in which he called climate change "one of the greatest challenges of our time."

Whether the governor now doubts how much the West has warmed is unclear. But rising sea levels, warmer temperatures and below-average snowpack are unmistakable to most scientists. And while he no longer comes out and says it is happening, Hickenlooper is preparing for climate change.

In an effort to conserve water, Colorado's governor said Americans need to get rid of nonnative Kentucky bluegrass from their yards and that industry needs to develop more water-efficient toilet flushing. As mayor of Denver, he swapped out energy-guzzling bulbs in traffic lights with more efficient ones. He introduced biodiesel into city fleets, successfully lobbied for mass transportation solutions, implemented an ambitious recycling program at Denver International Airport and praised urban infill. In his speech last week in Pueblo, Hickenlooper reportedly mentioned he has been in discussions with the CEO of Kum & Go about possibly facilitating a low-interest government loan so that the convenience stores could offer compressed natural gas as an alternative to gasoline.

When it comes to climate change, Hickenlooper may walk the walk. But he no longer talks the talk.

New World is on its way to becoming the hottest and the most engrossing MMORPG of 2021. After its recent successful launch, solely on the PC platform, New . safe new world gold

Whenever I had an issue. Then this website called https://makeeasylife.com/how-to-choose-the-best-research-paper-writing-service/ may be my first choice. Because I know that this is the one person who can save me from a massive problem!

Online signature is the thing without which now it is impossible to survive. There are companies like https://www.airslate.com/bots/webex who form some page where they can interact with customers and provide them useful tips. this allows customer to stay with the company.

It's late finding this act. At least, it's a thing to be familiar with that there are such events exist. I agree with your Blog and I will be back to inspect it more in the future so please keep up your act. groundworks norfolk

Really impressed! Everything is very open and very clear clarification of issues. It contains truly facts. Your website is very valuable. Thanks for sharing. Rejuvee Beauty & Holistic Salon

I will really appreciate the writer's choice for choosing this excellent article appropriate to my matter.Here is deep description about the article matter which helped me more. seguridad privada en cancun

Just saying thanks will not just be sufficient, for the fantasti c lucidity in your writing. I will instantly grab your rss feed to stay informed of any updates. Marketing agency bali

Very awesome!!! When I seek for this I found this website at the top of all blogs in search engine. Gardening Service Sunbury

Its as if you had a great grasp on the subject matter, but you forgot to include your readers. Perhaps you should think about this from more than one angle. animeflv