Even on foot, Lance is faster than most bikes

I'm getting pretty darn tired of getting smoked by Lance Armstrong. 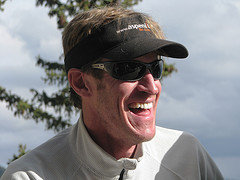 I was getting set to start the annual Aspen Mountain Hill Climb, organized each year by Coach Chris Keleher of the Aspen High School Cross Country Running Team, bright and early last Saturday morning. As usual, there were only a handful of intrepid mountain bikers, but plenty of runners to take on the brutal steeps of Aspen Mountain via the dreaded Summer Road. This is one steep-ass race course. Thus, not many cyclists show their faces for the gruesome challenge. I got a good look at the riders' (nervous) faces. But since the runners were starting 15 minutes behind us, I didn't catch their mugs. They wouldn't be a factor…..or so I thought.

“Three, two, one, GO!” And our quaint group of bikers took off up the steep dusty and rocky road. Wow. This is fun; NOT! But I have the lead. Sweet! A few minutes later, I blow up and watch two top local racers get by me. Then they gap me. Ouch! I have a pretty big gap on the guy behind me though. So, I might as well settle in for the duration; steep wall climbs followed by short flats to “recover”. Yeah, recover; right.

I'm maintaining my position in third up past Bonnie's and finally enjoy a bit of a downhill respite before the final grueling pitches to the Finish. On a turn, I take the opportunity to glance back to check my lead on my buddy in fourth and the good news is that he's out of sight. The bad news, in fact sad news, is that two runners are closing the gap on me. I had a 15-minute head start on the bike; holy mackerel dudes! One guy is in bright yellow and a dark “homie” baseball hat. The other guy, who appears a bit younger, is in a white T-shirt and black shorts; generic runner guy.
Lance is a pretty good runner too.

There's no way these runners are going to close it down on me. It never happens that way in this race. So, I shift to a bigger gear and start hammering my guts out, leaving a section of small intestine and half a lung in the powdery dirt. I look back to admire my newfound lead, but instead discover the mysterious man in yellow on my wheel. 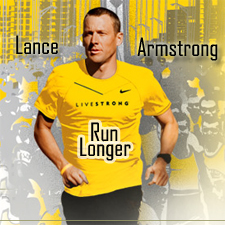 Lance is a pretty good runner too.

What the heck?! Who IS this guy, crushing my bikin' butt? I say “great job” and he says “what's up” — a real intriguing race dialogue. He passes me. I sit on his heel as long as I could. He pulls ahead and drops me without obvious effort.

The second runner passes me. This can't be frickin' happening. He get about 10 meters on me and we're about 50 meters from the Finish. I shift, stand and sprint and beat the generic runner guy at the line. Nice! Well, I guess, third place on the bike and one really sick runner passing me isn't too bad.

Then, I meet the man in yellow, with the hat and sunglasses disguise. He removes the get-up and I see it's Mellow Johnny; Lance himself with a big smile on his face.

“That was awesome man!” I congratulated him. We shared a few laughs, talking about the race for a few minutes. He asked about the remaining Aspen Cycling Club races and sounded like he'd be in and out of Aspen for the next several weeks at least.

As he enters semi-retirement, it seems like Lance will be spending more and more time hanging out here. He's smitten by Aspen; our super friendly residents, stunning natural beauty and our exceptional athletic opportunities. I hope to see The Boss again sometime soon. I just hope he doesn't run past my bike again! Jeez!

18 Comments on "Even on foot, Lance is faster than most bikes"

I found your this post while searching for information about blog-related research ... It's a good post .. keep posting and updating information. movies123

Really a great addition. I have read this marvelous post. Thanks for sharing information about it. I really like that. Thanks so lot for your convene. https://mthaipro.com

You have outdone yourself this time. It is probably the best, most short step by step guide that I have ever seen. https://gamesanookth.com/

Positive site, where did u come up with the information on this posting?I have read a few of the articles on your website now, and I really like your style. Thanks a million and please keep up the effective work. best mother board review

Wow, excellent post. I'd like to draft like this too - taking time and real hard work to make a great article. This post has encouraged me to write some posts that I am going to write soon. domino qq

I appreciated your work very thanks fentanyl for sale

I wrote about a similar issue, I give you the link to my site. 토토사이트

It's superior, however , check out material at the street address. 꽁머니

Hi there, You have done a great job. I will definitely digg it and in my opinion recommend to my friends. I am sure they will be benefited from this site. 메이저사이트

I've proper selected to build a blog, which I hold been deficient to do for a during. Acknowledges for this inform, it's really serviceable! 바둑이

I personally use them exclusively high-quality elements : you will notice these folks during: 토토사이트

To live fully and not just survive means to enjoy life to the full extent. There should be no bound to enjoy what you love. It is quite healthy to have different interests at every age. Our hobbies and interests keep us going despite the hectic lifestyle.

Some have an unmatchable love for automobiles, especially motorcycles. For these enthusiasts, the Harley Davidson group is the best place to cherish their automobile love. Being part of such a group that sees it as a lifestyle will for sure satiate as well as flame up one’s love for motorcycles.

Your texts on this subject are correct, see how I wrote this site is really very good. 릴게임

I invite you to the page where you can read with interesting information on similar topics. 토토커뮤니티

I've proper selected to build a blog, which I hold been deficient to do for a during. Acknowledges for this inform, it's really serviceable! 먹튀검증

For true fans of this thread I will address is a free online! 꽁머니

This content is simply exciting and creative. I have been deciding on a institutional move and this has helped me with one aspect. 스포츠티비

I think there are a lot of sentences that give me strength. I'll get positive energy. Thank you.메이저놀이터