RealAspen News and Community Content Feed
By Troy Hooper
Real Aspen – September 16, 2011
Former Vice President Al Gore is honored by the blowback he received after he blasted climate change deniers with a certain eight-letter epithet during an off-the-cuff speech last month in Aspen.

"There's a long tradition of people who don't like a particular message turning to attack the person delivering the message," he said on NPR's Talk of the Nation on Wednesday. “I view it as an honor, really. The message is an important one and I will continue doing my best delivering it the best I can.”

The man who won both a Nobel Peace Prize and an Oscar for standing up for the environment set off a firestorm of controversy in the conservative blogosphere after he referenced the book “Merchants of Doubt: How a Handful of Scientists Obscured the Truth on Issues from Tobacco Smoke to Global Warming” by Naomi Oreskes and Erik M. Conway, while speaking at the Aspen Institute on Aug. 4. In his interview with NPR, he duplicated the message he delivered in Aspen, sans the swear words. 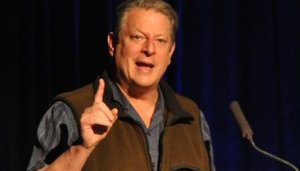 Gore said “carbon polluters” are "doing exactly the same thing that the tobacco industry did after the Surgeon General's report came out" linking smoking to cancer.

"They hired actors and dressed them up as doctors and gave them scripts saying that smoking isn't harmful," Gore told NPR. “Some of the same people and same organizations who took money from the tobacco companies to lie about the science of cigarette smoking are now taking money from the large carbon polluters and the oil and gas industry to mislead people about climate science.”

The one-time presidential candidate pointed to the extreme drought that has gripped Texas, flooding in Vermont and other states, millions of people displaced in Pakistan, flooding in Australia, and fires and drought in Russia as evidence that the earth's changing climate is no joke. “These are the events that scientists have been warning us about,” Gore said. “And now they're saying if we keep putting all of this global warming pollution up there, these events will become worse and more frequent.”

Acknowledging the vitriol that sometimes surrounds climate change discussions, Gore praised presidential candidate Jon Huntsman's “willingness to take big risks in the Republican primary by saying that he believes that the climate scientists are telling the truth. The deniers have accused him of all kinds of things. It's interesting, you know, 97-98 percent of all the climate scientists in the world are in agreement on this. Every national academy of science in every major country in the world is in agreement. So do you believe them or do you believe the Koch brothers and ExxonMobil and Rush Limbaugh? That's an easy choice for me. For some evidently it's not. Eventually reality has its day.”

Gore was on the program to promote The Climate Reality Project, which at 6 p.m. MDT Wednesday began streaming “24 hours of reality” about the earth's climate crisis and extreme weather. It is streaming in every time zone, in 13 languages, and features top scientists.

On Tuesday, Gore appeared on The Colbert Report where he also made the case for climate change.

“One of the reasons the economy is in trouble is because we keep going to war in the Middle East in the place where most of the oil is located and we keep borrowing money from China to buy oil from a market dominated by Saudi Arabia and then burn it in ways that destroy the future of the planet,” he said. “All of that has got to change. We can put people to work and strengthen the economy by building solar and wind facilities, refurbishing inefficient buildings, and building smart grids and fast trains and putting people to work instead of continuing this addiction to very expensive dirty oil and coal.”

Meanwhile, extreme skier Chris Davenport of Old Snowmass, Olympic snowboarder Gretchen Bleiler of Aspen, and snowboard star Jeremy Jones of Truckee, Calif., were on Capitol Hill on Thursday where they made their view clear: “There is no debate. Climate change is already happening and we're seeing it every day. … In our work, we've witnessed first-hand climate impacts on our mountains, from reduced snowpack and melting glaciers to dying alpine forests and shorter winter seasons,” they told Congress.

I am so thankful for a leader like Al Gore and for the tireless work he has done to bring attention the the reality and urgency of the Climate Crisis ...

I have seen "An Inconvenient Truth" and read the sequel "Our Choice" along with several other books on the subject and consider Mr. Gore to be the premier spokesperson for the effort to save our world from the ravages of Climate Change.

He has suffered much undeserved criticism over the years, and I sincerely hope his efforts to promote and inspire the rest of the world to serious action ... will be successful - in time to avoid the cataclysmic consequences that will otherwise be heading our way ...

This is my first visit to this subway surfers website, and I feel like I've gained a lot of fresh information. I hope this website is of use to many individuals. Thanks a lot!