RealAspen News and Community Content Feed
By Troy Hooper
Real Aspen – September 9, 2011
A new generation of pioneers have struck proverbial gold at an abandoned silver mine near Aspen.

What was once a wasteland of arsenic, cadmium, lead and zinc on a steep mountainside that abuts Castle Creek is now a haven for natural grasses and wildflowers that have stabilized the slope and drastically reduced the risk of the heavy metals crashing into the city's main water supply.

The striking change of scenery around Hope Mine is the result of the first whole-scale reclamation project ever attempted in the United States, and possibly the world, using biochar — a type of charcoal produced through the thermal treatment of organic material in an oxygen-limited environment. 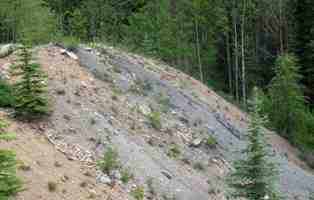 “We really were surprised how aggressive the regrowth was,” said John Bennett, executive director of For The Forest, which teamed up with Carbondale-based Flux Farm Foundation at the request of the U.S. Forest Service, which is exploring new ways to partner with private groups to reclaim landscapes. “We did not expect waist-high grass in the very first summer. We thought it would take longer.”

Not only is biochar restoring the ecology and containing the mine tailings that fan down toward Castle Creek but experts say it is also immobilizing the heavy metals long enough so that they naturally degrade and it is sequestering carbon that would otherwise escape into the earth's atmosphere.

The success at the aptly named mine is providing hope for federal officials looking to clean up an estimated 23,000 abandoned mines in Colorado and many more that scar the American West.

“Too many communities still live with the ghosts of their mining pasts — the abandoned mines that continue to threaten public safety and livelihoods that depend on clean watersheds — which is why I'm trying to make it easier for volunteers and Good Samaritans to help clean up these sites,” Sen. Mark Udall, D-Colo., told the Colorado Independent this week. “We need exactly this kind of public-private collaboration to fix a problem neither side has been able to tackle alone, and to make a real difference in our communities. Clean streams mean the fish can return, people can drink the water, and tourists will bring dollars and jobs back into these communities, making it a win-win effort." 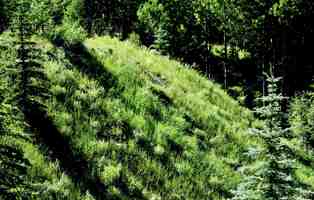 Hope Mine tailings in August after biochar.

For years, Udall has been working to introduce so-called Good Samaritan legislation to provide legal protection for nonprofit and others groups who clean up water contamination from old hardrock mines. So far, the mining industry and even environmental groups concerned that extraction companies could abuse the law have stymied the senator's efforts. More recently, Udall and Sen. Michael Bennet, D-Colo., have encouraged the Environmental Protection Agency to use its administrative discretion.

“The EPA has existing guidance that encourages potential Good Samaritans to enter into voluntary agreements with EPA or federal land management agencies that helps to facilitate Good Samaritan cleanups,” the senators recently wrote in a letter to the EPA. “We believe that the guidance could be updated to provide additional clarity to Good Samaritans that compliance with such agreements is sufficient to satisfy requirements that help protect environmental quality, including water quality.”

In the case of the Hope Mine project, For The Forest is working under a memorandum of understanding with federal authorities that Bennett believes provides “a reasonable level of protection.”

But to get more work done, he said, Good Samaritan legislation is “really wise and certainly needed.”

“The problems in forest restoration are so large that no one entity can do it alone. The Forest Service is very quick to admit they don't have the resources and no one community certainly does,” Bennett said.

“It's going to take a lot of people working together. It's hard to expect someone to step forward and volunteer to help restore the ecology of these landscapes when the prospect of litigation hangs over their head in the event something goes wrong in some future year despite their best intentions.”

I really don’t accept as true with this blog post. Nevertheless, I did looked in Yahoo and I have found out that you’re correct and I was thinking in the improper way. Carry on publishing good quality material like this. jaguarqq

Have you noticed the news has changed its approach recently? What used to neve be brought up or discussed has changed. It’s that time to chagnge our stance on this though. judi slot

Slot Deposit Pulsa great submit, very informative. I’m wondering why the other experts of this sector do not notice this. You must continue your writing. I am confident, you have a great readers’ base already!

I am curious to find out what blog platform you are using? I’m having some small security problems with my latest website and I would like to find something more secure. Do you have any solutions? jackpot338

Hello fellow web master! I really enjoy your site! I liked the color of your sidebar. North American Bancard agent

I think this is among the most vital info for me. And i’m glad reading your article. But want to remark on few general things, The web site style is wonderful, the articles is really excellent : D. Good job, cheers design thinking and innovation

of course breast cancer is avoidable, all you need is early detection and proper medical care;; cord gitar

I can’t really help but admire your blog. your blog is so adorable and nice .    צימרים בצפון לזוגות

Thanks for the information provided! I was looking for this information for quite some time, but I wasn’t able to see a dependable source. slot gacor 2023

There’s no doubt that it is the single most vital information in my opinion. And i am glad reading your article. But should remark on few general things, The internet site style is perfect, the articles is very excellent : D. Good job, cheers buy promethazine cough syrup online

Hey! This post couldn’t always be written much better! Examining this post reminds me of these area mate! He always stored talking about this. I’ll ahead this article to be able to your ex. Convinced he will have a very good go through. We appreciate you revealing! ФРЕЗА ФУГОВАЛЬНАЯ ПРЯМОЗУБАЯ 01.10.015.Z.XXX.0.0

This can be an incredibly amazing powerful resource that you’re offering and you simply provide it away cost-free!! I comparable to discovering websites which view the particular worth of offering you an excellent learning resource for zero cost. We truly dearly loved examining this article. Be thankful! panen138

Hip dysplasia is not uncommon in many dog breeds, particularly the larger breeds. It is a deformity of the of the hip joint so the bone and socket do not fit snug. It causes rubbing and degeneration of the bone, inflamation and damage to surounding cartalidge. The condition usually leads to arthritus as the bone is grinded down new mishapen bone grows back causing pain. The good news about Canine Hip Dysplasia is that most cases can be treated to help eliminate or decrease pain, allowing fairly normal levels of activity. Very few dogs today have to be put to sleep to alleviate suffering. There are always choices to be made, but the vast majority of affected animals can live quite comfortable lives. Depending on how severe the damege is pain medication and anti-inflammatory drugs can be given. Another very good supplement to give is glueclosamine. Eventually though surgery might be necessary. . . I would suggest talking to the shelter about having him examined by a vet of your choice before officially adopting him. If you are willing to spend a little money to consult with a vetranarian you’ll be able to discuss this guy’s prognosis. This way you can know beforehand if his case is mild or severe and what treatment options are reccommended and at what cost. I hope I haven’t scared you away from adopting this dog because it may only be arthritis misdiagnosed or a mild case of hip dysplasia, only a vet can tell you for sure. URGENT INDIA VISA