After another impressive day of racing, Levi Leipheimer (USA) of Team RadioShack retained the overall lead and will wear the Quiznos Leader Jersey heading into the penultimate stage tomorrow, which takes the riders from Steamboat Springs to Breckenridge.

“Today was a nice day because it was a little bit shorter and flat, and I think all the riders were looking forward to that. It's nice to have a mixture of stages,” said Leipheimer. “While I was riding I had the chance to look around and it was just breathtaking. Through all the communities you could tell that the entire population had come out to cheer us on and that was really nice.” 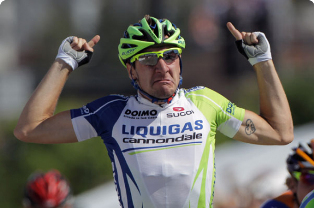 With beautiful weather against a stunning backdrop, Stage 4 of the race, which would take the riders on an 82.8-mile route to Steamboat Springs, began with two neutral laps around Avon. Although there were no categorized KOMs on this stage, it was filled with rolling hills through beautiful ranching country along Highway 131 that would still prove a challenging route.

A breakaway of three riders formed early in the stage and included Stefen Denifl (AUT) of Team Leopard-Trek, Cristhian Montoya (COL) of Gobernacion de Antioquia and Janier Acevedo (COL) also of Gobernacion de Antioquia. They were chased and soon joined by a duo from Team Type 1-sanofi Vladimir Efimkin (RUS) and Rubens Bertogliati (SUI). The breakaway of five managed to maintain a two-minute lead over the peloton for a good part of the race.

In the only sprint competition of the day, Denifil crossed the line at Oak Creek first, followed by Acevedo and Bertogliati. With no KOMs in the stage, the riders would focus on the stage win for the rest of the day.

With the entire Liquigas-Cannondale squad leading the chase at an average speed of 25 mph, the break was swallowed up with 4.5 miles to go to the finish in Steamboat Springs. With a wide, open road ahead the pack was spread out across the road. In the final stretch heading into the finish various riders and teams went to the front to go for the win, but ultimately the Liquigas-Cannondale team was able to get Viviani across the line first, followed by Michael Morkov (DEN) of Saxo Bank SunGard and Kenny Van Hummel (NED) of Skil-Shimano.

“Of all the events I've ever attended that was the most energetic finish I've seen,” said Shawn Hunter, co-chairman and CEO of the USA Pro Cycling Challenge. “Today's crowd was by far the biggest of the week and we keep growing. This race is only going to get bigger and bigger.”

The official energy partner of the USA Pro Cycling Challenge and sponsor for today's stage, Exergy is known for their projects and technologies that put the earth's clean forms of renewable energy to good use.

The company also sponsors the 2011 Exergy Most Aggressive Rider Jersey, which is awarded each day to the rider who best asserts himself in the peloton and tackles the challenges of the day. The jersey is currently being worn by Efimkin for his outstanding performance in today's breakaway.

The celebration in Steamboat moves to Werner Mountain, where the cyclists will take off under Steamboat's primary ski mountain. This will be another opportunistic stage with ample opportunities for breakaways and aggressive racing, but this time with a true mountain pass.

Following US 40 south and east out of town, the double-summit Rabbit Ears Pass will host a King of the Mountain line and ample viewing opportunities. After a sprint line in Kremmling the riders will travel alongside the scenic Green Mountain Reservoir on Colorado Route 9. After winding through Dillon, Keystone and the final KOM on Swan Mountain the cyclists will enter Breckenridge and race to the finish line downtown at Main and Wellington St., ending 106 miles of racing in what may prove to be the fastest road race finish during the seven day tour.

Fans can view the race on the daily VERSUS broadcasts. Stage 5 will air live on VERSUS tomorrow at 2 p.m. MT.