Texas Gov. Perry refers to himself 'as the president' at conservative confab in Aspen

RealAspen News and Community Content Feed
By Troy Hooper
Real Aspen – July 27, 2011
More than halfway through a panel discussion before Republican rainmakers in Aspen, Texas Gov. Rick Perry, while extolling his own foreign policy credentials, referred to himself “as the president.”

Recognizing his mistake, he repeated it, this time with a head-bobbing cackle straight out of former President George W. Bush's playbook. Then he shot the crowd a knowing look and corrected himself.

“As the governor of Texas,” Perry continued Friday, as the crowd roared with amusement, “we had the opportunity to meet with a substantial number of international leaders. … It is clear this administration's … lack of commitment to having a clear foreign policy has put America in jeopardy.” 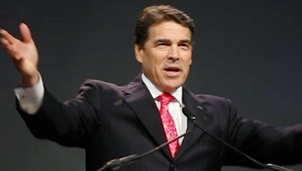 Texas Gov. Rick Perry has the floor at the Aspen Institute as South Carolina Gov. Nikki Haley and Aspen Institute President and CEO Walter Isaacson listen.
Riccardo Salvi
He and the others were in town for the Republican Governors Association's two-day executive roundtable convened by billionaire brothers Charles and David Koch. Despite its liberal reputation, Aspen is increasingly becoming the backdrop for conservative headline makers and, with momentum mounting in the polls, all eyes were on Perry.

Asked point blank if he's going to run for president, the governor said he'll know in three or four weeks.

“I'm going through a thoughtful process. I'm asking the right questions,” he answered, prompted by Isaacson. “I'm basically asking people, ‘Do you think there's room in this presidential election for a full-throated, unapologetic fiscal conservative? And if you do think there is room, are you going to help?'”

While dodging a direct declaration of his candidacy, Perry didn't hold back on his thoughts about gay marriage, Lance Armstrong, the economy and his self-perceived foreign policy chops. Nor was the aforementioned slip of the tongue the only verbal fumble that interrupted his smooth-talking spiel.

Despite attempts to distance himself from the last Texas governor who became president, Perry has an uncanny ability to channel many of Bush's good-ol'-boy swagger, mannerisms and word mangling. His pronunciation of “theater” calls to mind Bush's obliteration of the word “nuclear.” In Aspen, Perry even coined a new word — “preception” — when “preconception” or “perception” would've sufficed.

Yet this candidate is taking a decidedly different tack when it comes to wooing the Grand Old Party. Instead of preaching compassionate conservatism, Perry is preaching firebrand social conservatism.

But there is a caveat. He repeatedly made it abundantly clear that he is a champion of the 10th Amendment, imploring that the federal government should not decide socially controversial issues.

“Our friends in New York six weeks ago passed a statute that said marriage can be between two people of the same sex. And you know what? That's New York, and that's their business, and that's fine with me,” he said. “That is their call. If you believe in the 10th Amendment, stay out of their business.”

(Unsurprisingly it didn't take long for his Republican rivals, not in the room, to jump on Perry's words. “So Gov Perry, if a state wanted to allow polygamy or if they chose to deny heterosexuals the right to marry, would that be OK too?” presidential candidate Rick Santorum tweeted hours later.)

Perry again invoked the 10th Amendment when asked about the U.S. Food and Drug Administration's doping probe that has targeted part-time Aspen resident Lance Armstrong and other elite cyclists.

“The fact of the matter is our federal government is engaged in way too many things that they shouldn't be involved with at all,” Perry said. “The idea that they're telling us how to deliver health care. The idea they're telling us how to educate our children. The idea they're telling [Gov.] Susana [Martinez] how to build transportation infrastructure in her state [of New Mexico] is just completely and absolutely out of the main line thought of our founding fathers. They had no preception [sic] of what that would look like in 200 years but they knew they wanted to enumerate those powers and have a few powers for the federal government and then leave those powers to the states.”

Finally getting to the point, he declared: “The idea that the FDA is spending your tax money going after Lance Armstrong for something someone said he did in France is an absolute atrocity.”

The nation has better things to do, he said, like strengthening security at the U.S. southern border.

“We are wasting our time as a country having a conversation [about] immigration policy — ‘Do you think it ought to be this or it ought to be that?' — when the fact is the biggest issue that is facing this country is the absolute abysmal failure of the federal government to secure our border with Mexico,” Perry said. “That's the issue that we've got to address first. You cannot have an immigration policy discussion until you first secure that border. Sharing a 1,200-mile border with Mexico, I know what's going on there. I just signed a piece of legislation, a budget, that directed $152 million of Texas taxpayer money to our Texas Rangers and other law enforcement to help try to secure the border because of Washington's absolute ineptness. The idea that the president of the United States six weeks ago would come to the border with Mexico, to El Paso, to stand up and say the border between the United States and Mexico is safer than it's ever been is ludicrous on its face.”

Before underscoring immigration, Perry shrugged off the debate over raising the nation's debt ceiling.

“We're getting to watch some great political theater in Washington, D.C. That's basically what's going on. The fact is I suspect they'll come up with some deal. But there's nothing going to change the future of our country until we elect a United States Senate, add to the United States Congress and elect a president that understands how to create jobs in America and the private sector is the only place jobs will be created in this country, period,” he said.

“Our president has been criticized by the left and right as being unwavering, or wavering, or meandering — really hard to identify what his foreign policy is,” Perry said. “Or, he actually does have a belief and does have a clear foreign policy and that foreign policy is that America is not an exceptional country, and that he believes America has been arrogant with the way it has treated the rest of the world and that his ideas about the United States from the standpoint of the rest of the world is ‘Look, we just need to be another country out there and be one amongst equals.' I don't know which of those is correct frankly. Either way it is dangerous for America. I happen to think this world needs a strong America. An America that is strong economically and an America that is strong militarily. Our friends need to know that we will be standing with them. The Latvian president who was in my office this week, Walter, does not know where America stands relative to their defense in central Europe.”

It was that kind of a day for Perry. He had the floor and an adoring crowd.

The other governors charitably let him steal the spotlight, which Perry did, interrupting them to get in his two cents.

He claimed he never thought about running for president until his wife, Anita, a nurse, sat him down to explain “our country is in trouble.” “Obamacare,” she lamented, was “putting the practice of medicine, the delivery of health care, in jeopardy.” Concerned for the financial future of their 27- and 24-year old sons, Perry said “she said you need to get out of your comfort zone. Your country is in trouble and you need to do your duty. And I listen to my wife,” Perry said.

The crowd clapped and whistled.

The more he went on, the more clear it became that Perry is posturing for a 2012 campaign. After the Freudian slip in which Perry imagined he already was president, Isaacson sounded convinced of it.

“We didn't have to wait three weeks!” Isaacson exclaimed.

2 Comments on "Texas Gov. Perry refers to himself 'as the president' at conservative confab in Aspen"