Decrease blamed on increase in oil and gas drilling

RealAspen News and Community Content Feed
By Troy Hooper
Real Aspen – July 21, 2011
The industrialization of once wild landscapes is partly to blame for dramatic declines in mule deer and pronghorn antelope in Colorado and Wyoming, according to a new report.

After reviewing population trends, hunter-harvest reports and licenses sales from the two states over the last 30 years, wildlife biologists John Ellenberger and Gene Byrne concluded that oil and gas drilling, wind farms, agricultural practices and other human encroachments are slicing and dicing critical habitat the animals have historically relied upon to survive phenomenons of drought, weather and disease. The result: A slow, inexorable decline in populations of both species.

Humans are “cutting these big legendary Western landscapes into smaller and smaller islands of habitat. Not only is the winter range not as big and leaving mule deer and pronghorn antelope with fewer options but even the summer range is being impacted and, in some cases, the corridors the animals use to move between these ranges are being restricted by industrial uses,” Steve Torbit, the National Wildlife Federation's regional executive director, told the Colorado Independent this week. “Some of those chunks of land are just not useable and the animals' biological response is to either leave or die.” 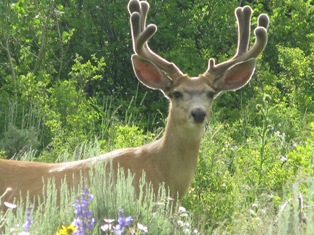 The study, titled “Population Status and Trends of Big Game along the Colorado/Wyoming State Line,” is the first professional review of broad statistics over such a long period of time. It focused on both sides of the Colorado-Wyoming border in an area roughly bounded by Interstate 80 to the north, the Green River to the west, U.S. Highway 40 to the south and Laramie, Wyo. and Walden, Colo., to the east.

Although the Wyoming Department of Game and Fish and the Colorado Division of Wildlife do share information for big-game management, much of the federal land along the common border is overseen by the U.S. Bureau of Land Management, which is administered by state directors whose mandate is “to focus on issues specific to the state they work in” and that “can lead to decisions that may be detrimental to neighboring states,” National Wildlife Federation representatives assert.

Too often, federal land managers approve development that characterizes itself as good for jobs and good for the economy without acknowledging it is detrimental to the ecosystem, according to the report.

“The BLM must recognize the cumulative, landscape-wide impacts of its decisions and that a lease or permit granted in one area or state can directly result in added stress to migrating game herds in an adjacent state,” Torbit said. “The needs of wildlife over the entire landscape need to be fully factored in before permits for oil, gas, wind farms, agricultural practices or any other human activity are permitted.”

Biologists dismiss claims from some area residents who believe coyotes and other predators are responsible for the decline in mule deer and pronghorn populations. There are fewer predators than before, the biologists point out, and historically deer and antelope herds have recovered from nature's killers.

“What's changed are the intense demands we are placing on Western landscapes,” Torbit said. “It appears that the new predator is the increased development and other human activity that has picked up pace over the past several decades. Mule deer and pronghorn are now experiencing 40-acre spacing of gas drilling pads and thousands of miles of roads and pipelines.”

With oil and gas development expected to surge as new fields in the Niobrara Formation are tapped along with other wide-open tracts in the West, biologists are concerned for the future of the animals.

“Evaluations of impacts to wildlife and wildlife habitat need to be performed at the landscape level, not just localized impacts,” said Ellenberger, the study's co-author. “We are concerned that at some point, the resiliency of these herds to recover will be lost, creating a situation where we can only expect further declines.”

A recent study of mule deer populations in Wyoming's Upper Green River Basin found a dramatic decline of mule deer over the past two decades. The study at college essay writing service found that the population of mules deer had dropped from 106,000 to 48,000 between 1995 and 2016.

I have been using the custom writings service for several years because I have to balance between an aside job and studying, so there is little time to keep up with the curriculum. It has become almost my safety ring, especially on Xmas Eve and other big holidays.

The mule deer and pronghorn antelope populations in the central Rockies have plummeted over the past decade in an alarming trend, according to a new study. As many as 74 percent of mule deer females and 80 percent of males have been hit by parasitic liver flukes. Need you can check https://geeksaroundglobe.com/wearable-technology-for-gambling-online/ and gain tips about the casino games. These parasites can be spread from one animal to another if they eat undercooked meat.

As many Wyoming and Colorado residents know, mule deer and pronghorn antelope have been suffering from a mysterious disease that has caused death in both species. Here to check this https://yummiestfood.com/pros-and-cons-of-online-casinos/ and get more ways about games online. The study conducted by Yellowstone to Colorado 2010 Mule Deer Project shows dramatic declines in mule deer and pronghorn antelope herds more than 300 miles from the Nebraska border.

Looking for someone to do essay for you? Visit this writing service PaperCoach and get academic assignments. You are free to contact them any time day or night.

You know writing any kind of written work is very hard for me. I always have a return from work, so I ask you to write my essay uk. And I know for sure that my work will be written correctly and competently.

If you are struggling with your emotions, iscribble is the perfect and appropriate drawing game that will help you solve them all.

cramtick provides the Salesforce CRT-450 certification exam dumps dumps PDF document to the candidates that are easily readable and accessible. It supplies basic information regarding all the relative Certification Preparation for Platform Developer I CRT-450 dumps questions and answers in a thoroughly organized manner.

As far as I know, there are many species of deer that are extinct. Recently, thanks to diggy I have been able to explore many places and earn a lot of money.

It is extremely nice to see the greatest details presented in an easy and understanding manner. Online Marketing Reviewed

I’ve read some good stuff here. Definitely worth bookmarking for revisiting. I surprise how much effort you put to create such a great informative website. Make Online Marketing

I read a article under the same title some time ago, but this articles quality is much, much better. How you do this.. Make Online Marketing

A debt of gratitude is in order for the blog entry amigo! Keep them coming... Make Online Marketing

My friend mentioned to me your blog, so I thought I’d read it for myself. Very interesting insights, will be back for more! Facebook Ads

I am impressed by the information that you have on this blog. It shows how well you understand this subject. Jeff Brown Reviews

Admiring the time and effort you put into your blog and detailed information you offer!.. Facebook Ads

This is also a very good post which I really enjoyed reading. It is not every day that I have the possibility to see something like this.. Jeff Brown Reviews

This website and I conceive this internet site is really informative ! Keep on putting up! Jeff Brown Reviews

With so many books and articles coming up to give gateway to make-money-online field and confusing reader even more on the actual way of earning money, Facebook Ads

A new study has found dramatic declines in mule deer populations across the United States. The study found that the average annual decline is 13% over the past decade. The study was performed by the University of Idaho and it looked at data to determine why those numbers have changed so drastically over time. Learn how to remove ads on utorrent with authentic technology ways. This has many people worried about the current ecological balance, including state wildlife officials and environmentalists. These states are now using this information to design new strategies to protect the species.

Expert designers do not only exceed expectations but urge to maintain their traditional approach to provide custom-oriented services.
mobile application development