RealAspen News and Community Content Feed
By Real Vail
Real Aspen – June 30, 2011
Colorado Division of Wildlife officers are asking the public for information about two or more individuals who were observed feeding cheeseburgers to a female black bear with three cubs at a Burger King restaurant in Eagle on Wednesday, June 28, between approximately 12:20 p.m. and 1:20 p.m.

Eagle Police Department reports indicate that several callers reported a sow and the cubs going through an improperly secured dumpster at the restaurant, attracting a small crowd of people. According to an Eagle police officer, witnesses at the scene said that they saw at least two people buying hamburgers and hand-feeding them to the bears. 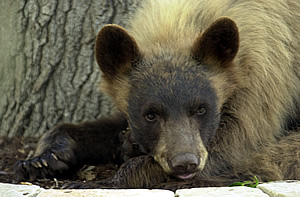 "This is an extraordinary example of stupid and irresponsible behavior by people," said Northwest Regional Manager Ron Velarde. "Because of their reckless actions, the sow and the cubs now know that people mean food. This dramatically increases the likelihood that these bears will get into trouble in the future and have to be put down."

Division of Wildlife officers are asking the public for help in identifying the person or persons involved, and are reminding the public that anyone caught feeding wildlife is subject to serious fines.

Eagle District Wildlife Manager Brian Wodrich said that he had previously received a report that this sow had entered a vehicle in the area and took food. The incident at the Burger King would further condition the bears to associate people with an easy meal.

Wodrich has approached local businesses and encouraged them to help reduce the possibility of conflicts with wildlife by using bear-resistant trash dumpsters and removing any bear attractants such as food, trash and bird feeders.

"The town of Eagle currently does not have ordinances that require bear-resistant trash dumpsters, which are a great way of keeping bears out of trash," said Wodrich. "We always encourage people and businesses in bear country to do their part to help reduce conflicts with wildlife."

Area Wildlife Manager Perry Will encouraged anyone who observes people feeding bears to call their local Division office, even if the person may just be passing through the state.

"Many of these restaurants are places where people on their way to another part of the country stop to eat, so it's possible that the people who fed the bears are long gone" Will said. "But what might have started out as a great photo opportunity for them creates a big problem for us. Locals and visitors alike need to understand that we will not tolerate anyone putting our citizens and our wildlife at risk."

Anyone who has information about this incident is asked to call the Division of Wildlife office in Glenwood Springs at 970-947-2920.

If you want to be a wildlife officer, you should have a degree in wildlife biology, ecology or a closely related field. A degree in biology is not required https://quotelicious.com/how-to-quote-article-in-essay/ said, but a wildlife biology degree will give you more options for career advancement. If a wildlife degree isn't available in your area, you can take a number of college biology classes to prepare for a wildlife job.

I am very thankful for the effort put on by you, to help us, Thank you so much for the post it is very helpful, keep posting such word search type of Article.