Salazar immediately issued a “temporary emergency withdrawal” through December of this year as the U.S. Bureau of Land Management prepares an environmental impact statement on mining around the Grand Canyon that's expected to be released this fall.

In announcing the full withdrawal as the preferred alternative, Salazar cited water quality concerns and the economic benefit of the more than 4 million visitors a year and $3.5 billion in tourism and outdoor recreation spending in the Grand Canyon region of northern Arizona. 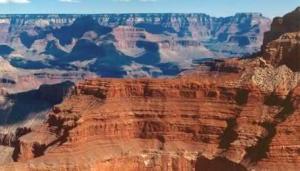 A two-year ban on new uranium mining claims, which had spiked by 2,000 percent since 2005, was set to expire on July 20. Salazar, a former Colorado senator, put the moratorium in place in July of 2009 in the wake of growing concern about a new uranium mining boom in and around the Grand Canyon.

That boom was anticipated as energy producers continue to look to nuclear power as a less carbon-intensive alternative to coal, oil and gas. The Grand Canyon ban may put more pressure on federal officials to tap into uranium resources in Colorado.

But Salazar today pointed out there are still eight uranium mines operating in the moratorium area and another 8 to 11 potential mines that could come online under existing rules.

“We'll continue to develop uranium in northern Arizona, Wyoming and other places in the country,” Salazar said, again pointing out existing claims that may still be allowed to move forward, even under the full ban.

“We expect continued development of those claims and the potential for new mines over the next 20 years. What we will not allow, however, is the location of additional mining claims. In fact, cautious development with strong oversight could help us answer critical questions about water quality and environmental impacts in the mining area.”

Asked if he expects the Republican-controlled U.S. House to take measures to counteract today's decision, Salazar wouldn't predict what opponents may do but again pointed to water quality concerns and the potential to hurt tourism and the outdoor recreation industry if a full-on uranium boom is allowed to take off in the Grand Canyon region.

“We commend the Obama administration for making a clear commitment to give the Grand Canyon long-term protection from new uranium mining at its doorstep,” Jane Danowitz, U.S. public lands director for the Pew Environment Group, said in a release. Pew had been running ads in the New York Times seeking the ban. “For decades to come, Americans will benefit from today's far-sighted decision to safeguard this natural icon.”

Now Pew is seeking reform of the 1872 Mining Law, which provides for no royalties for hardrock mining on public lands despite significant taxpayer exposure for cleanup operations. Two New Mexico Democrats have introduced legislation seeking to impose a 12.5-percent royalty rate closer to what the oil and gas industry pays on federal lands.

“Even with today's action, uranium mining is expected to expand around the Grand Canyon, underscoring the need for lawmakers to move swiftly to modernize the 1872 mining law,” Danowitz said. “We encourage the administration to work with Congress now to reform this antiquated law so that the Grand Canyon and other national treasures will be protected.”