RealAspen News and Community Content Feed
By Real Vail
Real Aspen – June 20, 2011
The body of a 31-year-old Denver man who fell into the Colorado River near State Bridge Lodge early Sunday morning was located today about two and a half miles downstream.

The Eagle County Sheriff's Office and other search and rescue officials are still working to recover the body of Sterling Prevost, whom authorities say may have been intoxicated when he fell into the river early Sunday morning. The body was located at 9:45 this morning.

"At this time the recovery of the body is still in progress; it is believed to be Prevost," according to a sheriff's office release. "Positive identification will be made by the Eagle County coroner." 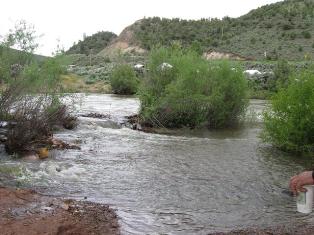 This is the area where a Denver man fell into the Colorado River early Sunday morning.
Eagle County Sheriff's Office

The search was suspended at 8 p.m. Sunday after an all-day operation beginning Sunday morning. The Colorado River is running very high due to record snowpack and spring runoff.

"Alcohol is believed to be a factor in this incident," according to a sheriff's office release on Sunday. Prevost was not boating at the time of the incident, but instead had entered a shallow area near the bank of the river and was apparently swept away.

0 Comments on "Body of Denver man located in Colorado River"