RealAspen News and Community Content Feed
By Real Vail
Real Aspen – May 23, 2011
A pack of coyotes attacked and killed a pet dog in Aspen on Friday afternoon, prompting the Colorado Division of Wildlife to remind residents to take precautions in areas where conflicts with wildlife are possible.

An Aspen resident said she and her dog were on a hiking trail on Smuggler Mountain when the attack occurred. The woman reported that she was walking her six-month old Labradoodle in an area where it is legal for pets to roam off-leash when one or more coyotes attacked the puppy after it apparently approached them in a playful manner.

"This is a very unfortunate incident and I feel very badly for this lady," said Area Wildlife Manager Perry Will. "It is also a sad reminder that pet owners need to keep their pets on a leash and take precautions whenever they walk their pets in areas where they could encounter wildlife." 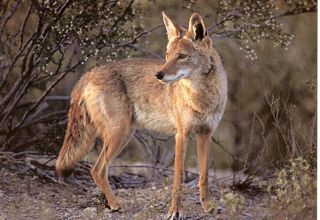 Although coyotes are typically shy and reclusive, they are also intelligent creatures that learn to adapt to changing conditions in their surroundings. As Colorado's growing population continues to encroach on coyote habitat, coyotes can lose their fear of people. Once that happens, coyotes can learn to target pets as prey items and in rare cases, become aggressive in the presence of people.

Division officials also caution that at this time of the year, many coyotes are rearing their young and can be especially aggressive and territorial.
The Division of Wildlife is warning residents to beware of aggressive, territorial coyotes.

Although hunting and other lethal and non-lethal methods have been used to control coyote populations, officials say a public that is educated and informed about living with coyotes and other wildlife species is the most effective way to reduce conflicts.

"Like all of Colorado's wildlife, coyotes can provide an enjoyable wildlife viewing experience, but this incident is a reminder that people need to keep their distance," said Will.

Will advises pet owners to keep their pets on leashes when walking them, even if the area does not prohibit walking them off-leash. He also has a few suggestions if you encounter a coyote.

"If a coyote approaches you or your pet, use a loud voice to frighten the animal," said Will. "Throw rocks or sticks to frighten it away."

Experts also recommend that even around the home, pet owners should keep their pets indoors, in a yard protected by at least a 6-foot fence or in an enclosed kennel. Avoid allowing a dog to approach coyotes at all costs, even if the animals appear to want to play. Often an apparent invitation to play is in reality a prelude to an attack.

Pet owners are also advised to avoid feeding their pets outside, which can attract coyotes and other wildlife such as bears into their yard. In addition, garbage should be kept in wildlife-resistant containers and cleaned regularly with hot water and bleach to reduce residual odors.

Residents of Colorado should keep in mind that as long as there is sufficient food and shelter, many wildlife species will readily utilize habitat in urban or suburban areas. If wildlife has made a home near yours, the Division of Wildlife strongly recommends taking precautions to avoid conflicts. With a little knowledge and understanding of wildlife behavior and habits, Coloradans can reduce the likelihood of a conflict and live compatibly with native species.

Aspen sections are handling through govt sectors now a day and they focused on more processes. The https://theislandnow.com/blog-112/get-professional-assistance-from-essay-writer-for-your-custom-papers/ fetch the report on this river and what we need to know.

I think one of your ads triggered my internet browser to resize, you might want to put that on your blacklist. Vergleich

There are some fascinating closing dates on this article but I don’t know if I see all of them middle to heart. There’s some validity however I’ll take maintain opinion until I look into it further. Good article , thanks and we want extra! Added to FeedBurner as effectively 대전출장안마

Its fantastic as your other posts : D, appreciate it for putting up. Thailandelite visa

hola. I just stumbled upon this kind of web publication plus I should really believe that this is a perfect page. Many thanks just for this important info. 김포출장안마

I have to get across my passion for your kind-heartedness in support of persons that really want assistance with this particular niche. Your special dedication to passing the solution all around appeared to be exceedingly beneficial and have all the time enabled some individuals much like me to achieve their goals. Your new invaluable facts entails a lot a person like me and much more to my colleagues. Thank you; from each one of us. 메이저사이트

I got what you intend, saved to fav, very nice website . Effectief leads targetten op LinkedIn!

I’m impressed, I have to admit. Actually rarely can i encounter a weblog that’s both educative and entertaining, and without a doubt, you might have hit the nail around the head. Your concept is outstanding; ab muscles a thing that too few individuals are speaking intelligently about. We are delighted i stumbled across this inside my seek out something with this. Real Estate Agent in Bangladesh

Absolutely outstanding information and very well written,thank you very much for this. auction online bidvaluable

Thanks for all of your work on this blog. My mother really loves managing investigations and it’s really obvious why. A lot of people know all of the compelling method you create very important strategies on this web blog and as well recommend response from visitors on the matter so my daughter is now studying so much. Take pleasure in the rest of the new year. Your carrying out a fantastic job. credit card processing iso