RealAspen News and Community Content Feed
By Troy Hooper
Real Aspen – March 30, 2011
A search for four men from Denver is under way in the mountains above Aspen after they didn't return from a multi-day backcountry ski trip to the Goodwin Green Hut on time. 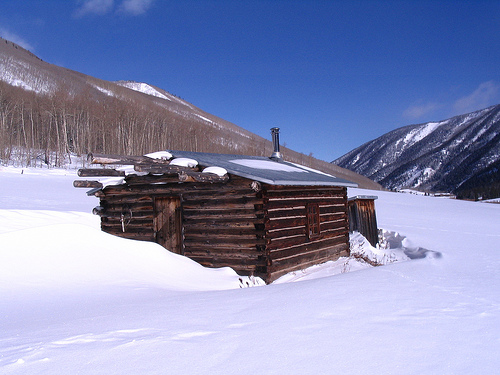 The Goodwin Green Hut near Aspen.

The men reserved the hut for Saturday, Sunday and Monday nights but, according to law enforcement, they told their friends they would be coming out of the backcountry on Monday. A heavy snowstorm, however, blew into Aspen on Sunday and Monday so it was expected they would return Tuesday instead.

The Pitkin County Sheriff's Office was notified of the overdue party on Monday evening. Authorities located the missing skiers' vehicle at the Ashcroft parking area off of Castle Creek Road and "per standard procedure, a note was left on the vehicle asking the skiers to phone the Sheriff's Office upon reaching cell range," according to a press release issued Tuesday night.

When the skiers did not come out by Tuesday afternoon, the sheriff's office and Mountain Rescue Aspen initiated a search for the four missing men, the sheriff's press release said.

"At the time of this release there are two snowmobiles and their operators making their way to the Goodwin Green Hut via Richmond Ridge to attempt to ascertain the skiers' location, point last seen, and/or direction of travel."

The Goodwin Green Hut is almost a dozen miles south of Aspen and part of the famed Alfred Braun hut system. It is located at 11,680 feet and mostly surrounded by the Collegiate Peaks Wilderness Area.

The area is prone to avalanches. Between two and three feet of snow has fallen in Aspen since Sunday.

The one-level Goodwin Green Hut sleeps 10 and includes propane burners for cooking, photovoltaic lighting, mattresses and pillows, eating and cooking utensils, toilet paper, matches and cleaning supplies. Hut users typically melt snow for water. Guidebooks say that routes to and from the hut are not well marked or maintained.

It is reportedly the most remote and hardest to find of the Alfred Braun huts.

Keep up the great work, I read few blog posts on this site and I conceive that your web blog is real interesting and holds circles of fantastic info. เล่นบาคาร่า ให้ได้เงินทุกวัน

Dubai has gained a lot more attraction from tourists from the past few years due to its skyscrapers, glamorous shopping festivals, and royal hotels. But it's still unexplored without its majestic desert expeditions. And your Dubai desert tales are incomplete without Capture Desert. It's the only place with all the gears to rejoice in your Desert safari Dubai.

In view of some high-quality work and enlightening considerations, I was truly inspired after reading this article. Mexiko Tipps

Greetings! Very helpful advice within this article! It's the little changes that make the most significant changes. Thanks a lot for sharing! Amsterdam

Hello, I do believe your web site may be having web browser compatibility problems. Whenever I look at your blog in Safari, it looks fine however, when opening in I.E., it has some overlapping issues. I just wanted to give you a quick heads up! Other than that, great site! This Is Why You Should Visit Graceland Elvis The Kings Home

This is a topic that's close to my heart... Take care! Where are your contact details though? compare hotel prices and room categories for your destination

Way cool! Some very valid points! I appreciate you writing this write-up plus the rest of the site is extremely good. Trip

Your style is unique in comparison to other people I've read stuff from. Thanks for posting when you've got the opportunity, Guess I'll just book mark this site. airport taxi Antwerpen

Pretty! This has been a really wonderful post. Many thanks for providing this information. Trekup India Har ki dun

This web site definitely has all of the information and facts I needed concerning this subject and didn’t know who to ask. cruceros singles

Your style is unique in comparison to other people I've read stuff from. I appreciate you for posting when you have the opportunity, Guess I'll just bookmark this web site.sunshinebeachhotelsvacation.com

This is a good tip especially to those new to the blogosphere. Simple but very precise info… Many thanks for sharing this one. A must read post!cheapest flights anywhere

Greetings! Very useful advice in this particular post! It is the little changes that will make the largest changes. Thanks for sharing!sunshinebeachhotelsvacation.co.uk

I have to thank you for the efforts you have put in writing this site. I am hoping to see the same high-grade blog posts from you later on as well. In fact, your creative writing abilities has inspired me to get my own, personal blog now Marina Bay Sands Pool

It’s hard to come by well-informed people in this particular topic, but you sound like you know what you’re talking about! Thanks padi idc gili islands

This is a really good tip especially to those fresh to the blogosphere. Simple but very precise info… Thanks for sharing this one. A must read article!Oktoberfest Germany

Greetings! Very helpful advice in this particular article! It's the little changes which will make the biggest changes. Thanks for sharing! The Big Five In Africa-A Wildlife & Conservation Volunteer Experience

We are a young and ambitious team that stand confident and rock-solid behind our values, belief, and services. Our carefully selected staff is highly trained in their work field. As a team, we work with great commitment and a never-ending smile on our faces. things to do in Hurghada