RealAspen News and Community Content Feed
By David O. Williams
Real Aspen – March 24, 2011
Opponents of the last significant anti-FASTER bill still kicking in the State Legislature celebrated its demise in committee on Wednesday. House Bill 1084, sponsored by Republican Kevin Grantham in the Senate and Republican Randy Baumgardner in the House, was killed 3-2 by the Senate State, Veterans and Military Affairs Committee. 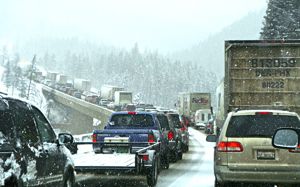 “FASTER enables Colorado to fix crumbling bridges and ensure the safety of the traveling public,” said Pam Hutton, chief engineer at the Colorado Department of Transportation (CDOT). “Safe and efficient operation of our transportation system is a linchpin of our Colorado way of life.”

HB 1084 would have rolled back the mandatory vehicle registration late fees of up to $100 imposed under FASTER – a stopgap funding measure that in 2009 increased overall registration fees to pay for repairs to 128 structurally deficient bridges in the state. Republicans have relentlessly hammered on FASTER as an unfair tax increase during an ongoing recession, frequently using it on the campaign trail in recent elections.

However, there have been few concrete proposals for finding permanent revenue sources to make up serious CDOT budget shortfalls, including money needed to fix weekend gridlock along Interstate 70 between Denver and Vail. The state agency says it needs another $500 million a year just to get Colorado roads back to an acceptable baseline level of repair and upkeep.

FASTER, pre-recession, was supposed to bring in an additional $250 million a year. It's fallen short of those projections but has still made a serious dent in critical road and bridge repairs, according to CDOT officials. And FASTER backers also say it's helped create jobs.

“FASTER has created or saved about 7,000 jobs since its passage in 2009,” said Tony Milo, executive director of the Colorado Contractors Association. “House Bill 1084 would have eliminated a significant portion of these jobs just when the economy is starting to show signs of improvement.”

Generally I do not read post on blogs, however I would like to say that this write-up very forced me to check out and do so! Your writing taste has been surprised me. Thank you, quite great post. 광주출장마사지

Ashton Kutcher and Demi Moore have already spoken out against the idea, saying that they’d rather not encourage anymore people to stalk celebrities. So, the first thing to do is to decide the purpose of your ad. รองพื้น

Howdy! Do you know if they make any plugins to safeguard against hackers? I’m kinda paranoid about losing everything I’ve worked hard on. Any recommendations? Httpmarketing vacatures: Wie komt ons SEO team versterken?

Hi, Neat post. There’s an issue along with your website in internet explorer, might test this? IE nonetheless is the market chief and a good component of other people will leave out your excellent writing because of this problem. Packers and Movers Pune to Jaipur

Hey there, You’ve done a fantastic job. I will definitely digg it and personally suggest to my friends. I’m confident they’ll be benefited from this website. 대구출장안마

i like war movies and inglourious basterds is one of the movies that i really love;; Packers and Movers Chennai

The following time I learn a weblog, I hope that it doesnt disappoint me as much as this one. I imply, I know it was my choice to read, however I actually thought youd have something interesting to say. All I hear is a bunch of whining about one thing that you may fix for those who werent too busy on the lookout for attention. Veel gestelde vraag waarom is een sitemap aan te bevelen?

After examine a number of of the blog posts in your web site now, and I truly like your way of blogging. I bookmarked it to my bookmark website listing and might be checking back soon. Pls check out my web site as well and let me know what you think. how to sell credit card processing

Wow! This can be one particular of the most useful blogs We have ever arrive across on this subject. Basically Great. I am also a specialist in this topic therefore I can understand your hard work. barnous

I have been meaning to write about something like this on my blog and this has given me an idea. Thanks. Визни центар за Турску

The article is really very interesting! I will continue to try me here to keep you informed. Thank you! Packers and Movers Chennai

Magnificent site. Plenty of useful info here. I am sending it to a few buddies ans additionally sharing in delicious. And of course, thank you in your effort! beacon payments agent program

I’ve been following your web site for some time now and finally, I decided to write this post in order to thank you for providing us such a fine content!!! gosc.pl

Hi there! I just want to give a huge thumbs up for the nice information you’ve here on this post. I will probably be coming again to your weblog for extra soon. wholesale bidvaluable

When I initially commented I clicked the “Notify me when new comments are added” checkbox and now each time a comment is added I get three e-mails with the same comment. Is there any way you can remove me from that service? Thanks a lot! PVC pipes

I think this is an informative post and it is very useful and knowledgeable. therefore, I would like to thank you for the efforts you have made in writing this article. Server Infrastructure Certified Information Systems Auditor (CISA) Cisco Certified Networking Professional (CCNP) Routing and Switching Citrix Certified Associate

Hello! I just now would choose to make a massive thumbs up for any great info you’ve got here with this post. I am returning to your blog site for further soon. חשפנות אילת

I’m really enjoying the design and layout of your site. It’s a very easy on the eyes which makes it much more pleasant for me to come here and visit more often. Did you hire out a developer to create your theme? Exceptional work! Bible verse images

Thank you for the good critique. Me and my neighbor were just preparing to do some research on this. We got a book from our local library but I think I’ve learned better from this post. I am very glad to see such fantastic information being shared freely out there. Packers and Movers Noida to Hyderabad

When visiting blogs” i always look for a very nice content like yours .  Packers and Movers Delhi to Gurgaon Charges

There is noticeably a lot of money to understand this. I assume you made certain nice points in features also. how to become a credit card processing company

Thanks for all your efforts that you have put in this. very interesting information. نموذج تأشيرة الولايات المتحدة عبر الإنترنت

After study a handful of the web sites on the website now, and I truly like your strategy for blogging. I bookmarked it to my bookmark site list and will also be checking back soon. Pls consider my website at the same time and figure out what you consider. https://wittycreators.in/graphic-designer-company-in-south-delhi

in my opinion, Grand Theft Auto is super addictive based from my experience. https://hostinglelo.in/cheap-web-hosting-india

Great website right here! Additionally your web site starts up very fast! What host are you getting service from? Can you pass along your associate link for your host? I want my web site loaded up as fast as yours lol https://www.lohiasales.com

whoah this blog is magnificent i love reading your posts. Keep up the great work! You know, lots of people are looking around for this info, you could help them greatly. https://heylink.me/daftar-spg69