RealAspen News and Community Content Feed
By Real Vail
Real Aspen – March 21, 2011
In the 28-year history of the Korbel American Ski Classic, it has only been done twice … and both by women ski racers.

Not since Vail's Cindy Nelson won back-to-back Volvo Legends Giant Slalom titles in 1989 and 1990 has a Legends' racer been able to defend his or her Giant Slalom crown the following season. Prior to Nelson, it was former U.S. Ski Team member Joan Hannah who turned the trick in 1985 and 1986.

When some of the greatest names in ski racing history descend on Vail Mountain's Golden Peak Thursday afternoon for the 2011 Volvo Legends Giant Slalom, both 2010 champions, American Casey Puckett and Italy's Isolde Kostner, will be on hand to try and join the exclusive “Repeat Club”. 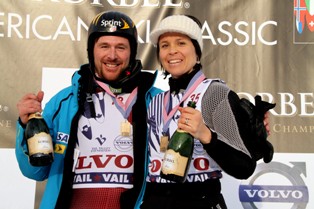 Casey Puckett and Isolde Kostner are back to defend their Legends titles at the Korbel American Ski Classic in Vail on Thursday.

“Becoming a champion of the Volvo Legends Giant Slalom requires a mix of both skill and luck,” said Michael Imhof, vice president of sales and operations for the Vail Valley Foundation, organizers of the annual event.

“While you might think that younger racers like Casey and Isolde would have an obvious advantage being more recently involved in world class international competition, our unique handicapping system ensures that all of our legends have a level playing field. Winning the Volvo Legends requires that you not only break out the GS suit and race skis, but that you also leave nothing in the start gate.”

A year ago, Puckett, a rookie Legend at the Korbel American Ski Classic and fresh off his Vancouver Olympic skier cross competition, knocked off former U.S. Ski Team star Steve Mahre in the finals to claim the victory, while Kostner, the 2009 Korbel Ford Cup celebrity team captain, took out American Pam Fletcher in the gold medal pairing to notch the win.

However, the path to another Legends title for either competitor will not be a walk in the park. The men's field will include the likes of Austria's Franz Klammer, American stars Phil and Steve Mahre and Puckett's former teammate, Daron Rahlves.

On the ladies' side of the bracket, Kostner will need to find a way to deal with Americans Pam Fletcher and Hilary Lindh, Canada's Karen Stemmle, Germany's Marina Kiehl and Swedish ace Ylva Nowen.

In addition to the racing action, the Golden Peak Stadium will also be the site of the Bud Light Street Beat free concert, featuring the soulful funk sounds of Robert Randolph & the Family Band. The free performance is scheduled to get underway at 6:30 p.m., immediately following the Volvo Legends Giant Slalom award ceremonies.

The 2011 Korbel American Ski Classic is a project of the Vail Valley Foundation. For additional information on the Ski Classic or the Foundation, check out www.vvf.org.

I am glad to be a visitant of this gross web blog ! , regards for this rare info ! . 대전출장마사지

Often the Are generally Weight reduction plan is unquestionably an low-priced and flexible weight-reduction plan product modeled on individuals seeking out shed some pounds combined with at some point maintain a far healthier your life. la weight loss เซรั่ม

Someone necessarily assist to make critically articles I’d state. This is the first time I frequented your web page and thus far? I amazed with the analysis you made to make this actual submit incredible. Excellent activity! https://kubett.vip

I’m really inspired along with your writing talents and also with the structure in your blog. Is this a paid subject or did you customize it yourself? Anyway stay up the nice quality writing, it’s uncommon to peer a nice blog like this one these days. เว็บบาคาร่า

I wish to express my passion for your kind-heartedness for individuals that should have help with this important area. Your real commitment to getting the solution up and down had become remarkably powerful and has specifically empowered individuals much like me to achieve their targets. This invaluable hints and tips signifies a lot a person like me and substantially more to my colleagues. Warm regards; from each one of us. Brew Monkey Das Bierbrauset für zu Hause

Some times its a pain in the ass to read what blog owners wrote but this site is very user friendly ! . 남양주출장마사지

Aw, this became an extremely nice post. In thought I would like to devote writing such as this moreover – taking time and actual effort to make a very good article… but exactly what do I say… I procrastinate alot and by no means find a way to get something completed. lifeguard certification near me

Hi, i read your blog occasionally and i own a similar one and i was just curious if you get a lot of spam comments? If so how do you prevent it, any plugin or anything you can suggest? I get so much lately it’s driving me insane so any assistance is very much appreciated. 대전출장마사지

Online games… [...]Good day! Do you use Twitter? I’d like to follow you if that would be okay. I’m undoubtedly enjoying your blog and look forward to new posts.[...]… best iso partner program

You make so many great points here that I read your article a couple of times. Your views are in accordance with my own for the most part. This is great content for your readers. Business intelligence services

Dental implants Mexico The next occasion I read a weblog, Hopefully that this doesnt disappoint me as much as this one. Come on, man, Yes, it was my choice to read, but When i thought youd have some thing fascinating to express. All I hear can be a number of whining about something you could fix should you werent too busy in search of attention.

I think other site proprietors should take this website as an model, very clean and great user friendly style and design, as well as the content. You’re an expert in this topic! south delhi packers and movers

I don’t ordinarily comment but I gotta admit appreciate it for the post on this special one : D. Upskill talent

But wanna remark on few general things, The website design and style is perfect, the subject matter is very superb : D. fix leak

I believe one of your advertisements caused my web browser to resize, you might want to put that on your blacklist. Water Tanks

There is noticeably a lot of money to understand this. I assume you have made particular nice points in functions also. Inspirational Bible verse images

hello SEO guys, I love all your prasing comments, but can we discuss SEO too? best iso merchant program

I simply needed to thank you very much all over again. I’m not certain the things I might have made to happen without the creative concepts shown by you over my topic. It has been a very scary case in my opinion, however , noticing this specialised strategy you treated the issue forced me to jump for joy. Now i’m grateful for this information and even expect you find out what a powerful job you were putting in educating others with the aid of your web blog. I am sure you haven’t encountered any of us. https://dynamichealthstaff.com/staff-nurse-vacancy-in-dubai

I think I could disagree with the main ideas. I won’t share it with my friends.. You should think of other ways to express your ideas. https://wittycreators.in/graphic-designer-company-in-vasant-kunj

Wonderful line up. We will be linking to this wonderful article on our website. Maintain up the very good writing. become an iso merchant services