RealAspen News and Community Content Feed
By David O. Williams
Real Aspen – March 17, 2011
Environmental groups trying to compel the U.S. Bureau of Land Management to mitigate the climate change impacts of coal mine methane are encouraged by Wednesday's BLM decision to reconsider approval of a mine expansion on Colorado's Western Slope.

The BLM last week asked the Interior Board of Land Appeals (IBLA) to remand its environmental assessment (EA) and decision to approve expansion of Oxbow Mining's Elk Creek coal mine near Somerset. Wednesday the IBLA granted that request and vacated the BLM's January decision approving the expansion.

“We wanted to take another look at strengthening that EA and trying to address some concerns that had been raised by some environmental groups,” BLM Colorado spokesman Steven Hall said. Holy Cross Energy, the electric co-op for the Vail Valley, is working on a plan to capture methane from a Western Slope coal mine and convert it into power. 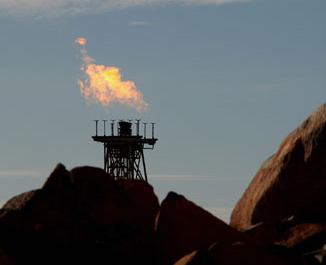 WildEarth Guardians and the Sierra Club last month filed an appeal of the BLM's approval of the expansion, arguing via the environmental law firm Earthjustice that the BLM failed to take into account the “one-two punch” of carbon dioxide produced by burning the coal in power plants and the discharge of methane gas into the atmosphere at the actual mine site.

In their appeal, the groups cited BLM data showing the mine will vent at least 5.1 million cubic feet of methane into the air on a daily basis. The U.S. Environmental Protection Agency (EPA) says methane is 20 times more potent as a heat-trapping greenhouse gas than carbon dioxide.

However, coal mines have to vent methane so that coal can be safely mined beneath the surface without a potentially deadly explosion like last year's Upper Big Branch Mine disaster in West Virginia that killed 29 miners. That disaster put more focus on safety at Colorado coal mines.

The latest BLM decision to take another look at coal mine methane is a boost for environmentalists who want the federal agency to require the industry to either capture methane – the main constituent of natural gas – and produce electricity, or flare it off to reduce its climate-change impacts.

“This isn't about shutting down coal mining; it's about seizing opportunities to protect clean air, the climate, and public health,” said Jeremy Nichols of WildEarth Guardians. “More importantly, it's about finding every opportunity possible to recover value.

“In this case, recovering methane from the Elk Creek Mine would bring in much-needed revenue and create new jobs. This is a win-win opportunity, and we support the Bureau of Land Management's decision to take another look at this issue.”

However, it's unclear to what degree the BLM will require Oxbow Mining to either capture or flare methane at the Elk Creek Mine.

“We have rewritten the environmental assessment to account for issues related to coal mine methane and climate change and we're currently reviewing it in the state office and the solicitor is doing it also,” the BLM's Jim Sample said. “The next step will be for our state director to review it and sign it and we'll post it.”

An Oxbow official last year told the Colorado Independent it was too dangerous to flare off methane and impractical to capture it and convert it to electricity. However, credible industry groups are trying to work out ways to do exactly that, exploring plans to convert methane into power and reduce the amount of gas that's simply vented into the atmosphere.

The state's natural gas industry has been blasted recently by the coal industry for leaking methane into the atmosphere during production – specifically during hydraulic fracturing — and then again during transport of natural gas via pipelines.

I really enjoyed your amazing website. Be sure to keep it up. May god bless you !!!! 울산출장마사지

Spot on with this write-up, I truly assume this web site needs way more consideration. I’ll most likely be again to read rather more, thanks for that info. สูตรบาคาร่า

Well done – It really takes a lot of time to have blog posts. While I don’t agree on your blog I will concede that your are entitled to have your own perspective. The site ended up having some cool perspectives. Cool work job– 토토사이트

This article contains great original thinking. The informational content here proves that things aren’t so black and white. I feel smarter from just reading this. 의정부출장안마

It looks like which i are concerned about my own personal information, not necessarily a different inividual in my small analysis. 광주출장안마

I’m keen on this post, enjoyed this one thank you posting . Klik hier Organisch hoger in google 10 belangrijke tips

Wholesale Gucci Shoes Will be blogengine as good as wordpress blogs somehow? Is required to be because it is turning out to be popluar currently. [Reply] merchant services iso agent program

Hey there, Can I copy this post image and implement it on my personal web log? Buy Cocaine In UK

I discovered your website website on bing and appearance a couple of your early posts. Preserve within the really good operate. I merely additional encourage Feed to my MSN News Reader. Seeking forward to reading more by you down the line!… packers and movers chennai to bangalore

I discovered your blog site internet site on bing and check a couple of your early posts. Always maintain the good operate. I simply extra the Feed to my MSN News Reader. Looking for toward reading a lot more from you at a later time!… soft skills

Youre so cool! I dont suppose Ive read anything this way just before. So nice to get somebody with many original ideas on this subject. realy i appreciate you for starting this up. this website is one thing that is needed online, someone with some originality. valuable project for bringing something new for the internet! podolog białystok

Oh my goodness! an amazing post dude. Appreciate it Even so We are experiencing issue with ur rss . Do not know why Unable to enroll in it. Is there everyone getting identical rss issue? Anyone who knows kindly respond. Thnkx selling payment processing services

One more important issue is that if you are a mature person, travel insurance for pensioners is something you need to really look at. The more mature you are, a lot more at risk you’re for getting something bad happen to you while abroad. If you are not necessarily covered by some comprehensive insurance coverage, you could have quite a few serious challenges. Thanks for discussing your good tips on this web site. 1000 litre water tank

An interesting discussion might be priced at comment. I believe that you simply write regarding this topic, it will not be described as a taboo subject but typically consumers are inadequate to chat on such topics. An additional. Cheers Psalm 23 images

they all are tired from white teeth thats why they put gold or silver teeth!!!! Packers and Movers Hyderabad

That was fun, lots of interestin stuff, now time for food!|MzSheSoJaZZy| Packers and Movers Noida to Jaipur Charges

Great post. I was checking continuously this weblog and I am impressed! Very useful information specifically the last section I maintain such info a lot. I used to be seeking this certain info for a very long. Thanks and best of luck. How to become a credit card processor

Strange this put up is totaly unrelated to what I used to be searching google for, but it surely was indexed at the first page. I guess your doing one thing right if Google likes you sufficient to put you at the first web page of a non similar search. https://dynamichealthstaff.com/ielts-online-coaching-india

I dugg some of you post as I cogitated they were very beneficial very useful https://wittycreators.in/graphic-designer-company-in-rohini