RealAspen News and Community Content Feed
By Real Vail
Real Aspen – February 11, 2011
Colorado Sen. Mark Udall, who Thursday urged American politicians to stay united on the issue of the ongoing popular uprising in Egypt, today issued a statement on Hosni Mubarak stepping down as president after 30 years of dictatorial rule. 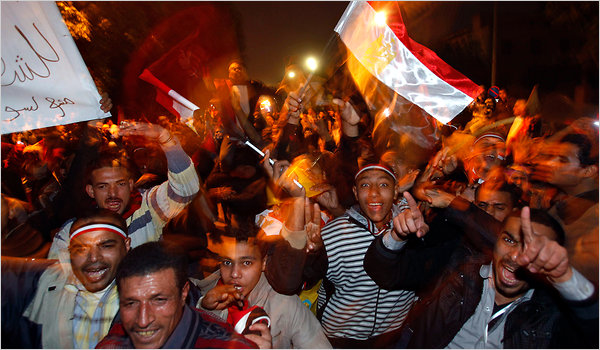 “President Mubarak has finally heard the voices of the Egyptian people and relinquished his 30-year hold on power, after 18 days of peaceful protests,” Udall said. “As Egyptians celebrate their freedom tonight, we celebrate this moment with them.

“It's important that the military continue to act as a stabilizing force throughout this transition. As a member of the Senate Armed Services and Intelligence committees, I believe we need to do everything we can to continue to support Egypt's peaceful move toward democracy.”

Mubarak reportedly turned over control of the government to the Egyptian military, which is heavily underwritten by more $1 billion a year in U.S. funding. Thursday on MSNBC with Chris Matthews, Udall said American political debate over that funding and the type of government that will now take over needs to be kept on this side of the Atlantic.

Other Colorado politicians, including U.S. Rep. Doug Lamborn, have pointed to instability in the region as a wakeup call that America needs to produce more energy domestically.

I impressed, I have to say. Really not often do I encounter a blog that each educative and entertaining, and let me inform you, you’ve hit the nail on the head. Your concept is outstanding; the difficulty is one thing that not sufficient individuals are speaking intelligently about. I’m very glad that I stumbled across this in my seek for something regarding this. Viză de turist pentru Canada

Youre so cool! I dont suppose Ive read anything such as this just before. So nice to locate somebody with some original ideas on this subject. realy we appreciate you starting this up. this web site are some things that is needed on-line, a person with a little originality. beneficial project for bringing new stuff to the world wide web! หนังใหม่hd

Those are very good suggestions for me, I have read many articles on this topic, waiting for your next sharing. scribble io

I wanted to send a word to say thanks to you for those nice tips you are sharing at this site. My considerable internet look up has finally been recognized with brilliant content to share with my friends. I ‘d believe that many of us website visitors actually are undoubtedly blessed to be in a very good website with so many lovely professionals with interesting techniques. I feel pretty blessed to have encountered your entire webpages and look forward to tons of more enjoyable minutes reading here. Thanks again for everything. bjs gas price

It's important that the military continue to act as a stabilizing force throughout this transition. As a member of the Senate Armed Services and Intelligence committees, I believe we need to do everything we can to continue to support Egypt's peaceful move toward democracy. Apigee-API-Engineer Exam Questions Answers

Your blogs are easily accessible and quite enlightening so keep doing the amazing work guys. lavender essential oil and dogs

If you want to know about me to read my page .
Roorkee Escorts |
Rishikesh Escorts |
Call Girls in Dehardun |
Ajmer Call Girls |
Escorts Service in Kaushambi

I am all that much satisfied with the substance you have specified. I needed to thank you for this extraordinary article. bohme

It's a very beautiful and enchanting article. I'm so impressed with myself. No, actually, your site is just more amazing. It's so wonderful. .. floor lamp

You completed certain reliable points there. I did a search on the subject and found nearly all persons will agree with your blog. shuffleboard tables

Thank you for your sincere sharing, I think many people have the same problem as you. The tiny fishing game is a fun, virtual fishing experience that encourages players to explore the intricacies of fishing. nerdle is a new digital board game that blends elements from classic strategy games like chess, checkers, and hex and board games like snakes and ladders.

In basketbros, you take control of one of two characters on either team and compete against another player or the AI. In each round, you must outscore the other person by shooting baskets before they do so first.

I like this post,And I figure that they having a great time to peruse this post,they might take a decent site to make an information cosmetic dentistry carrollton ,thanks for sharing it to me.

It was a decent post to be sure. I completely delighted in understanding it in my lunch time. Will definitely come and visit this blog all the more frequently. Much obliged for sharing. tmj specialist dallas

I am always searching online for articles that can help me. There is obviously a lot to know about this. I think you made some good points in Features also. Keep working, great job! online dispensary canada

Great job for publishing such a beneficial web site. Your web log isn’t only useful but it is additionally really creative too. There tend to be not many people who can certainly write not so simple posts that artistically. Continue the nice writing botox training

Before a period I looked through fundamental substance to relate my evaluations then, at that point, tracked down your site on google.

Staggering article. I am so stunned. I think you have a mind blowing data especially while dealings with such subjects. Appreciation for your vehicle; wild style. An overflow of thanks sharing your article.

Appreciation for the inconceivable post you posted. I like how you portray the remarkable substance. The centers you raise are affirmed and reasonable.

I propose every client expecting you are finding such information so come to here and visit it.

The game plan of your site is so noteworthy I right now bookmarked these relationship thinking about the bosses for sharing them.

Book Your Best Raipur Escorts at the best price, you can easily book your call girls and make your night romantic and sexy.

This is my first time visit to your blog and I am very interested in the articles that you serve. Provide enough knowledge for me. Thank you for sharing useful and don't forget, keep sharing useful info: https://homeawesome.in/best-desert-air-cooler-india/

I always visit new blog everyday and i found your blog.`~–* 減肥藥