The Vilar Performing Arts Center's (VPAC) 13th season will soon get under way and tickets for the entire winter 2010-11 lineup -- including shows by comedian Lewis Black, songwriter Randy Newman and local favorites Maceo Parker and Keller Williams -- go on sale at 11 a.m., MST, on Monday, Nov. 1.

“Our upcoming winter season features many exciting, well-known artists, but also some incredible hidden gems,” said VPAC Executive Director Kris Sabel. “I always say some of the best performances at the venue are the ones where you knew nothing about the artist before seeing them live and then are blown away. These shows are like my ‘hidden gems.'” 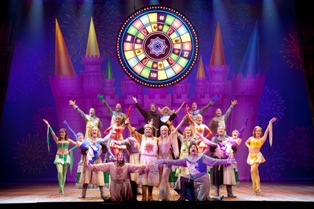 Spamalot will be on the Vilar Center stage in February.
Courtesy of the Vail Valley Foundation
www.vvf.org

Sabel's “hidden gems” include R&B/Soul artist James Hunter on Feb. 4 as well as Christian McBride & Inside Straight on March 23.

“Hunter's music will appeal to audiences both young and old -- think Robert Cray vocals with Sam Cooke styling. This music is fun and easy to listen to,” said Sabel. “Christian McBride is one of the hottest jazz bass players in the world today. You may know him from his tenure as Sting's bass player, but he's played with all the greats. With his band Inside Straight his concert will make even the most uptight among us cool and swinging.”

Tickets for the entire season are available starting Nov. 1 online at www.vilarpac.org, by calling (888) 920.ARTS (2787) or in person at the box office in Beaver Creek. The box office is open 8 a.m – 5 p.m. MST Monday through Friday, with additional hours on performance days.

Tues, February 22: A Gala Evening with Anna Netrebko – Benefit for the VPAC

Only in this school it was first time to be conducting the communions with the best of the gestures to be come upon this time. Outdoor community with the access that will be helpful for the website to communion’s works on the resume writing services reviews website then have much be relaxation.

I attended the event and recorded some of the music that was performed there and uploaded it to Soundcloud. You can listen directly to my Soundcloud or download it using Soundcloudtomp3downloader.

Townhouse people group that were implicit Florida during the blast or were condominium transformations during the blast years are seeing a great deal of dispossessions because of https://www.sunboundhomes.com/blog/can-i-afford-a-senior-living-community the quantity of deals that were to financial backers and because of the drop in values.

You may know him from his tenure as Sting's bass player, but he's played with all the greats. cheap wholesale jewelry

Cool stuff you have got and you keep update all of us. tulum best hotels

If you have iPhone 8+ or above models, you know these models have glass back bodies. These glasses add a sleek look phone replacement parts to the phones, but it also makes them vulnerable to cracks. If you have a cracked back glass, it needs to be replaced as soon as possible to avoid self and phone injury. This repair is not advisable at home. Even if you try to do it, you may end up severely damaging your phone. One should not indulge in DIY cell phone repair because if you damage it by yourself, there will be no warranty. Bringing your phone to a professional cell phone repair xiaomi replacement parts shop is a much safer & smart option. If you want to own a cell phone repair business, procure reliable and authentic cell phone parts from leading wholesale cell phone repair parts. Injured Gadgets offers the widest range of Apple, Samsung, Motorola, and LG parts, tools, and accessories at the best market prices.

Digisol Hub is a one stop destination for digital marketing services lahore, web development and web designing services. Get in touch with us to get a free consultation!

Heya! I’m at work browsing your blog from my new apple iphone! Just wanted to say I love reading through your blog and look forward to all your posts! Keep up the superb work! cairo private airport transfers

Very interesting blog. Alot of blogs I see these days don't really provide anything that I'm interested in, but I'm most definately interested in this one. Just thought that I would post and let you know. Apne Tv

Great post I would like to thank you for the efforts you have made in writing this interesting and knowledgeable article. toonily

mangakakalot Wow what a Great Information about World Day its very nice informative post. thanks for the post.

Great articles and great layout. Your blog post deserves all of the positive feedback it’s been getting. cara daftar indobet

I am jovial you take pride in what you write. It makes you stand way out from many other writers that can not push high-quality content like you. 꽁머니커뮤니티

If you are looking for more information about flat rate locksmith Las Vegas check that right away. https://homedesigninstitute.com/course/186/

I found it the most fantastic and informative like rzstatus help us and give information with Punjabi Status. Thanks for sharing keep sharing.

Thanks for sharing want to become your regular user. Alone Status

Your work is very good and I appreciate you and hopping for some more informative posts. Thank you for sharing great information to us. 룸카지노먹튀

his is actually my first time writing a blog. I had no idea how to go about it, but I'm learning as I go. So far it's been pretty easy to maintain, but I'm sure there will be more challenging times ahead.

A domain name is an identification label which defines a realm of administrative autonomy, authority, or control in the Internet. Domain names are also critica for domain hosting\website hosting Hardware tools

You undoubtedly ensure it is look simple along with your business presentation however i come across this kind of topic being truly an issue that I think I might never recognize. It appears also complex and extremely wide personally. I will be impatient for your next article, I am going to try to get the hang of it! umbrella holder outdoor

learning hypnosis is great, i used it to hypnotize myself so that i can relax` invention ideas for students

My spouse and I stumbled over here coming from a different website and thought I might check things out. I like what I see so i am just following you. Look forward to exploring your web page yet again. 벳쑤아리

BUSR is an international gaming company based in the United Kingdom and the USA. DURANBAH N.V. is the owner of Busr with a Curação license of. is busr legit

Hello there! I know this is somewhat off topic but I was wondering which blog platform are you using for this site? I’m getting tired of WordPress because I’ve had problems with hackers and I’m looking at options for another platform. I would be fantastic if you could point me in the direction of a good platform. 벳샷

Hiya, I’m really glad I have found this information. Nowadays bloggers publish only about gossips and net and this is actually annoying. A good website with interesting content, that’s what I need. Thanks for keeping this web-site, I will be visiting it. Do you do newsletters? Can’t find it. 안전놀이터