RealAspen News and Community Content Feed
By David O. Williams
Real Aspen – October 17, 2010
Another mountain climber died in Colorado's high peaks on Saturday, adding to a tragic toll that may be a state record for climbing and hiking deaths in one year and comes just a few days after officials called off the search for a Chicago man missing in the Holy Cross Wilderness Area near Vail.

The latest tragedy, according to the Denver Post, occurred between Taylor Peak and Powell Peak in Rocky Mountain National Park. It was the fifth fatal fall in the park this year, and it underscores a growing trend of accidents and fatalities in Colorado's high country, where more people are taking more risks and there have been 11, possibly 12, deaths on or near Colorado fourteeners (peaks over 14,000 feet) this year. 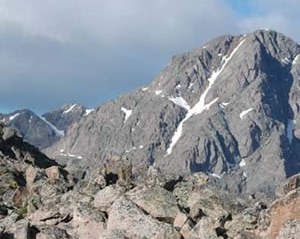 Mount of the Holy Cross.

The deaths and disappearances have also rekindled the decades-old debate about personal responsibility and risk-taking versus taxpayer-funded search and rescue efforts. Most SAR organizations are volunteer operations, but sheriff's officials, park service employees and – in the case of the lost Holy Cross hiker – Colorado Army National Guard helicopters -- are brought in to aid volunteer searchers.

In the Holy Cross case, a well-supplied and somewhat experienced Chicago-area hiker decided to try a circuitous 25-mile route that included trying for the summit of 14,005-foot Mount of the Holy Cross. Nearly 50 search and rescue volunteers from five different SAR organizations looked for James Nelson for more than four days, logging in excess of 1,000 hours.

Nelson did not have a cell phone on his week-long hike, and after several days it would have lost power anyway, and in many places would not have had service. Still, posters on different climbing blogs have questioned Nelson's judgment, and backcountry experts advise never travelling alone in a wilderness area, where a twisted ankle can be fatal.

The Holy Cross case conjured memories of a Lakewood woman, Michelle Vanek, who went missing on Mount of the Holy Cross in 2005, as well as other lost hikers and disappearances on the mysterious mountain with a cross of snow that forms in the summer. Posters on climbing sites have been talking about the “Holy Cross Triangle.”

The Eagle County Sheriff's Office called off the search for Nelson at midnight Tuesday, although a multi-county search and rescue training operation took place in the Holy Cross Wilderness Area on Saturday.

“The focus of this training is to teach teams how to work together and the best practices when searching conducting an intensive search of a small area on foot,” according to a release from the Eagle County Sheriff's Office. Earlier in the week, the sheriff had said SAR groups would look for clues to the disappearance of Nelson during regular training operations in the area.

Saturday's training, according to the Denver Post, was going on near Vail on the same day a 54-year-old Colorado resident climbing with two others on Taylor Glacier in Rocky Mountain National Park fell and slid 350 feet to his death. Park rangers were working today to recover his body.

A later Post story reported the man had been identified as James Charles Patrick, a plumber from Littleton, and that he "tumbled 1,000 feet" down the glacier, taking a climbing rope with him when he fell and stranding his two climbing partners, who were later rescued. The paper reported Patrick's body was airlifted out today.

I don't understand the debate regarding personal responsibity vs taxpayer funded seach and rescue efforts. That's our country's system - we all collectively pay taxes so that a few don't have to foot the bill. If you take a risk and drive too fast and crash your car, should we not send the ambulance to rescue you? If you burn your house down while playing with fireworks, should we not send the fire department to put out the blaze? One cannot expect to get equal value from our tax money - sometimes I will get the benefit and sometimes it will be you. We all pay state and local taxes for education right? Well, If I don't have any children to educate, am I exempt from paying that tax? Of course not. Someone else paid taxes so you could go to school. Now it's time for you to pay someone elses kid's way.

I am just happy she was found alive and well. She didn't intend to get lost anymore than people intend to crack up their cars, or burn down their homes.

travelot4...I think the article meant personal responsibility versus all volunteer search and rescue teams. All the teams I know in Colorado are 100% volunteer and do not get any tax payer funds. So when people get into trouble in the backcountry, and we go out to help, it does come into play that we are risking our lives to help someone else because that is what we do. Its when folks put themselves at risk unnecessarily that spurs the debate.

Jenn, I think we are on the same page actually. The article stated that the search brought up the debate again. That's all.

I hike in the mountains of Wyoming and here too, the searchers are volunteers. I'm just saying if tax paid searches occur, that's okay in my book. Getting lost on a hike can happen to the best of us and we depend on each other to survive. I pay taxes for your schools etc. and for search efforts to find you if you're lost on the trail. I'm glad to do it and hope you would do the same for me.

Oh yes, I would completely agree with you. It is our passion to assist people who need our services. Being an all volunteer organization, we rely on donations and fundraisers to keep us up and running. The best way to support search and rescue teams is to purchase a hunting/fishing license or a CORSAR card or donate to your local team. Be safe!

This is my first visit to your web journal! We are a group of volunteers and new activities in the same specialty. Website gave us helpful data to work. เว็บพนัน

Positive site, where did u come up with the information on this posting? I'm pleased I discovered it though, ill be checking back soon to find out what additional posts you include. telescoping ladder

This is truly an practical and pleasant information for all. Thanks for sharing this to us and more power Zonnepanelen installateurs Drogenbos

Two full thumbs up for this magneficent article of yours. I've really enjoyed reading this article today and I think this might be one of the best article that I've read yet. Please, keep this work going on in the same quality. Zonnepanelen installateurs Haacht

I’ve been searching for some decent stuff on the subject and haven't had any luck up until this point, You just got a new biggest fan!.. Zonnepanelen installateurs Galmaarden

Great post I would like to thank you for the efforts you have made in writing this interesting and knowledgeable article. Zonnepanelen installateurs Halle

Through this post, I know that your good knowledge in playing with all the pieces was very helpful. I notify that this is the first place where I find issues I've been searching for. You have a clever yet attractive way of writing. Zonnepanelen installateurs Glabbeek

A great website with interesting and unique material what else would you need. Zonnepanelen installateurs Herent

Great tips and very easy to understand. This will definitely be very useful for me when I get a chance to start my blog. Zonnepanelen installateurs Grimbergen

I've been looking for info on this topic for a while. I'm happy this one is so great. Keep up the excellent work Zonnepanelen installateurs Keerbergen

When your website or blog goes live for the first time, it is exciting. That is until you realize no one but you and your. Zonnepanelen installateurs Haacht

Hi there, I found your blog via Google while searching for such kinda informative post and your post looks very interesting for me Zonnepanelen installateurs Herne

Thank you very much for sharing such a useful article. Will definitely saved and revisit your site Zonnepanelen installateurs Halle

Very useful post. This is my first time i visit here. I found so many interesting stuff in your blog especially its discussion. Really its great article. Keep it up. Zonnepanelen installateurs Hoeilaart

Well, this got me thinking what other workouts are good for those of us who find ourselves on the road or have limited equipment options. Zonnepanelen installateurs Herent

Thanks for sharing this information. I really like your blog post very much. You have really shared a informative and interesting blog post with people.. Zonnepanelen installateurs Herne

This is very useful post for me. This will absolutely going to help me in my project. Zonnepanelen installateurs Huldenberg

so happy to find good place to many here in the post, the writing is just great, thanks for the post. Zonnepanelen installateurs Hoegaarden

The material and aggregation is excellent and telltale as comfortably. Zonnepanelen installateurs Kampenhout

The material and aggregation is excellent and telltale as comfortably. Zonnepanelen installateurs Kampenhout

Your site is truly cool and this is an extraordinary moving article. Zonnepanelen installateurs Kortenaken

Thanks for sharing this information. I really like your blog post very much. You have really shared a informative and interesting blog post with people.. Zonnepanelen installateurs Huldenberg

Glad to chat your blog, I seem to be forward to more reliable articles and I think we all wish to thank so many good articles, blog to share with us. Zonnepanelen installateurs Kortenberg

I like viewing web sites which comprehend the price of delivering the excellent useful resource free of charge. I truly adored reading your posting. Thank you! Zonnepanelen installateurs Kampenhout

I’m happy I located this blog! From time to time, students want to cognitive the keys of productive literary essays composing. Your first-class knowledge about this good post can become a proper basis for such people. nice one Zonnepanelen installateurs Kraainem

Really impressed! Everything is very open and very clear clarification of issues. It contains truly facts. Your website is very valuable. Thanks for sharing. Zonnepanelen installateurs Kapelle-op-den-Bos

Really impressive post. I read it whole and going to share it with my social circules. I enjoyed your article and planning to rewrite it on my own blog. Zonnepanelen installateurs Keerbergen

It is imperative that we read blog post very carefully. I am already done it and find that this post is really amazing. Zonnepanelen installateurs Drogenbos