RealAspen News and Community Content Feed
By Real Vail
Real Aspen – August 25, 2013
For Aspen’s Tejay van Garderen , the third time was a charm as he wiped out prior frustration at the USA Pro Challenge and won the event on a sun-splashed final day in Denver.

Slovakian sprinting sensation Peter Sagan once again won the stage – making it four out of seven in this year’s USAPC – but van Garderen got the overall victory after finishing third in 2011 and second last year.

“This race really bummed me out the last two years getting in the yellow jersey and then losing it, being so close,” van Garderen said. “But now I kind of went 3-2-1, so it was kind of a natural progression, I guess.” 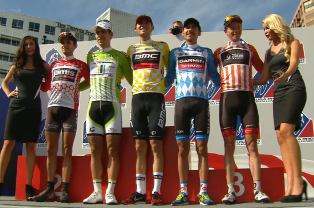 There’s a bit of irony, however, that former Boulder resident van Garderen now calls Aspen home with his wife, Jessica Phillips. Armstrong also has made Aspen his second home in the Colorado mountains.

Van Garderen said on Sunday it was amazing to win on home soil.

“Every corner or turn I would hear my name shouted by all these crazy fans, and it was really special to get that kind of crowd support,” van Garderen said after finishing with the main peloton on Sunday after seven criterium laps and 72.4 largely ceremonial miles through Denver.

His final margin of victory wound up being the same cushion he built in winning the grueling Vail Pass Time Trial in Stage 5 on Friday: 1 minute, 30 over teammate Mathias Frank and 1:42 over Garmin-Sharp’s Tom Danielson.

Now van Garderen hopes to springboard off this success and push for bigger things in the Tour de France.

“It’s big,” he said of his momentum from two American tour wins. “Obviously, I was disappointed in the Tour [this year]. You have your highs and lows. I’m hoping to come back next year and fight for a higher GC [general classification] place in the Tour.”

Go to the USA Pro Challenge website for more results.

Good to become visiting your weblog again, it has been months for me. Nicely this article that i've been waited for so long. I will need this post to total my assignment in the college, and it has exact same topic together with your write-up. Thanks, good share. Definitief ontharen

I wish more writers of this sort of substance would take the time you did to explore and compose so well. I am exceptionally awed with your vision and knowledge. Ramen Bierbeek

I wish more writers of this sort of substance would take the time you did to explore and compose so well. I am exceptionally awed with your vision and knowledge. Ramen Bierbeek

This was incredibly an exquisite implementation of your ideas Ramen Boortmeerbeek

I’m happy I located this blog! From time to time, students want to cognitive the keys of productive literary essays composing. Your first-class knowledge about this good post can become a proper basis for such people. nice one Ramen Boutersem

They're produced by the very best degree developers who will be distinguished for your polo dress creating. You'll find polo Ron Lauren inside exclusive array which include particular classes for men, women. Ramen Haasrode

We are tied directly into the sate’s renewal database which allows us to process your request almost instantly. Ramen Herent

Truly, this article is really one of the very best in the history of articles. I am a antique ’Article’ collector and I sometimes read some new articles if I find them interesting. And I found this one pretty fascinating and it should go into my collection. Very good work! Ramen Heverlee

Took me time to understand all of the comments, but I seriously enjoyed the write-up. It proved being really helpful to me and Im positive to all of the commenters right here! Its constantly nice when you can not only be informed, but also entertained! I am certain you had enjoyable writing this write-up. Ramen Holsbeek

I wish more writers of this sort of substance would take the time you did to explore and compose so well. I am exceptionally awed with your vision and knowledge. Ramen Kampenhout