But Aspen resident Van Garderen now wears the yellow jersey with a four-second overall lead over teammate and Stage 2 winner Mathias Frank of Switzerland, who finished third on Thursday in the rain-splashed queen stage into Beaver Creek.

Van Garderen, who’s finished third and second overall in the first two editions of the Pro Challenge, is in familiar territory. He held the overall lead two years ago heading into the Vail Pass Time Trial only to see Levi Leipheimer win the stage and eventually the race. 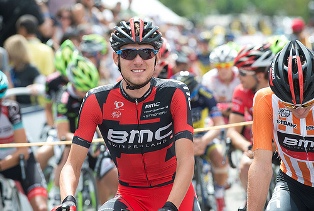 This year the 2011 Best Young Rider from the Tour de France (he wound up fifth) seems determined to change his also-ran status in the Pro Challenge. His chief rival, Boulder-based Garmin-Sharp’s Tom Danielson, is now 40 seconds off the overall lead in fourth. Acevedo is 30 seconds back at third in the general classification.

The climb up Bachelor Gulch near the end of Stage 4, a 10-percent grade in places, proved decisive as the peloton exploded and Australia’s Mick Rogers (Team Saxo-Tinkoff) was left out front.

As the climb continued to shake thing up, Frank, van Garderen, Danielson and Acevedo formed the group chasing down Rogers, which eventually they did before dropping him on the climb.

Powering over the top, Danielson led, with van Garderen and Acevedo following. Now, with just more than seven miles to go until the finish in Beaver Creek, the pressure was building. On the descent, Acevedo attacked and was challenged by van Garderen, leaving Danielson, and eventually Frank, chasing just a few seconds back.

Behind them a group of eight, including Stage 3 race leader Lachlan David Morton of Garmin-Sharp, was keeping pace at only about 30 seconds back.

“The biggest challenge was the bottom of Bachelor Gulch. It was an insanely hard tempo,” van Garderen said.

As the rain began to pound down on the riders, van Garderen and Acevedo powered through the final climb, lined with eagerly awaiting fans, to the finish line in Beaver Creek. Acevedo eventually took the stage, followed by van Garderen and 13 seconds later, Frank. 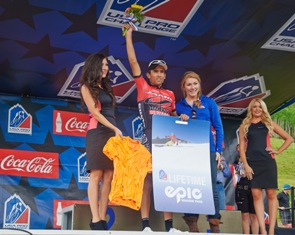 “I felt very good and confident,” Acevedo said. “I had to go as easy as I could going downhill, taking as little risk possible going around corners. I had a tremendous day today and I felt good about it. For me to win today is just amazing.”

Van Garderen said Acevedo told him he would work with the Colorado rider if the Colombian could have the stage win.

More interested in time over his main competitors for the yellow jersey than a stage win, van Garderen said he made that deal and let Acevedo have the victory.

Friday’s Vail Pass Time Trial – an old Coors Classic stage dubbed “The Race of Truth” – takes riders around Vail Village and then 10 miles up the old Highway 6 climb on Vail Pass. The individual TT climbs 1,500 feet in elevation and ends at 9,622 feet.

The last time the USA Pro Challenge visited Vail, the Time Trial was decided by 58 hundredths of a second. Competition will be equally fierce this time around, but the names may change a bit. The course’s roots are in Colorado racing lore and trace back to the Coors Classic. Starting in Vail and climbing most of the way up Vail Pass, the route is no easy proposition, even for the best racers on earth. The gentle grades of the first half of the course give way to a steady climb for the last three miles. But it takes more than legs on this strategic course; go too hard early and the climb may kill your chances, but conserve too much for the climb and the leader board may be out of reach.

How to Watch the 2013 USA Pro Challenge

Fans can view the race on the daily NBC Sports Network and NBC broadcasts. Stage 5 will air live on NBC Sports tomorrow at 2 p.m. MT.

In addition to the broadcast, fans can follow the 2013 USA Pro Challenge with the Tour Tracker. Available on the race website, as well as through a free download on iTunes and Google Play, the Tour Tracker includes:

* Live video coverage of the last two hours of every stage

For full results and more information, go to the official race website www.prochallenge.com.

I learn some new stuff from it too, thanks for sharing your information. ตารางบาส

I am very enjoyed for this blog. Its an informative topic. It help me very much to solve some problems. Its opportunity are so fantastic and working style so speedy FOR MORE DETAILS.