RealAspen News and Community Content Feed
By Real Vail
Real Aspen – May 10, 2013
Arapahoe Basin is calling it the "Endless Winter," and even has Twitter hash tag to that effect: #EndlessWinter.

The ski resort high atop the Continental Divide reported another three inches Friday morning on top of a foot of new snow on Thursday for a two-day total of 15 inches of new snow and a whopping 67-inch base on May 10. 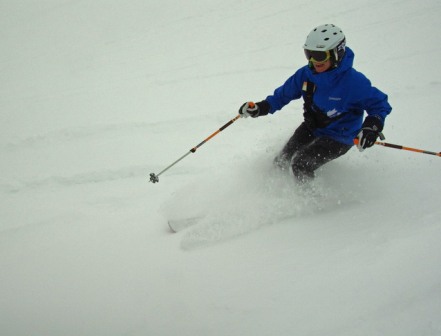 "The spring ski and ride season has just been incredible, and today was no exception," A-Basin Marketing and Communications Manager Adrienne Saia Isaac wrote on Thursday. "That snow report you saw this morning was accurate – 12 inches of fresh snow blanketed Arapahoe Basin Ski Area today just in time for another weekend of live music, amazing food and – of course – the best skiing in the state of Colorado."

In fact, after Loveland Ski Area closed on Sunday, May 5, A-Basin is offering the only in-bounds, lift-served skiing in the state, and plans to do so until Sunday, June 2.

"We’re still 100 percent open, offering up legendary terrain including Pallavicini and Montezuma Bowl," Saia Isaac added. "Get up here if you can and get some more turns in before you break out your bikes and running shoes."

Much drier, sunnier weather is in the forecast for the upcoming Mother's Day weekend.

"Today [Friday] starts the trend of drier warmer weather, which will last through at least the middle of next week," reports Opensnow.com. "There will be some afternoon showers over the mountains every day, but nothing substantial or long lasting. Temperatures will warm, especially on Sunday into early next week."

Thanks for the wonderful information. Keep it up!บาคาร่าสด

I was in search of this article. Glad! to find it on this website.

Store For all of your Superhero Outfit, Celerity Jackets And Leather Jackets! - online
Season 2 The Punisher Frank Castle Vest

Store For all of your Superhero Outfit, Celerity Jackets And Leather Jackets! - online
Season 2 The Punisher Frank Castle Vest

Whenever I find myself in need of hard copies or any kinds of prints, I always look for Digitek. Their https://www.digitekprinting.com/coroplast-signs provides high quality products and what really makes them special is their consistency and reliabilty especially whenever you need them the most. You must try their services!