RealAspen News and Community Content Feed
By Real Vail
Real Aspen – October 25, 2012
Beaver Creek snowmaking crews cranked up the resort's snow guns for the first time this season Wednesday night, adding to a blast from Mother Nature that dropped seven inches of real snow on the top of the mountain.

Vail opens to the public on Friday, Nov. 16, and Beaver Creek follows soon after on Wednesday, Nov. 21.

More natural snow is in the forecast, and the Vail Valley is still under a Winter Storm Advisory through Friday. 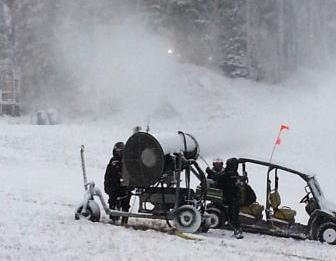 Snowmaking at Beaver Creek.
Beaver Creek Resort
Copper Mountain, Keystone and Wolf Creek are all scheduled to open to the public on Friday, Nov. 2. However, Copper will open its new U.S. Ski Team Speed Center for race training on Wednesday, Oct. 31 -- nearly two weeks earlier than it debuted last season.

"Last year we had a few good days on the Speed Center before heading to Lake Louise to start our World Cup season, but this year we should be able to have a few good weeks with World Cup snow conditions and terrain," speed specialist Marco Sullivan said in a press release.

"The facility is invaluable for our development pipeline," he added. "In the past we trained downhill from six to eight in the morning and none of the young racers who trained later in the day even knew we were there. Now we're having midday sessions and the club kids can come over and watch some of the best downhillers in the world. I learned a lot like that while I was young. It's inspiring for kids to see what the top level is doing."

Vail’s Lindsey Vonn went on to win her fifth straight downhill title, fourth consecutive super G crown and the women's downhill team would lead the nation's standings for downhill by 636 points over Austria, with Julia Mancuso finishing second in super G and fifth in downhill.

Beaver Creek’s snowmaking crews fired up the snow guns on four trails Wednesday night, including two on the main mountain and one in Bachelor Gulch. In addition, snowmaking started on the Flyway portion of the Birds of Prey Downhill course. World Cup action is slated for Nov. 30- Dec. 2 this season.

For more information and resort updates go to www.beavercreek.com.