Washington and Oregon both have measures similar to Colorado’s Amendment 64 on the ballot this year. It is unknown how the federal government will respond if any or all of them pass. The feds could respect the decision of voters, they could try to block implementation of some parts of the law, or they could shut down dispensaries and arrest people involved in the wholesale and retail ends of the business.

While no one can say what the feds will do if 64 passes, they have not completely looked the other way on medical marijuana. In Colorado, the Department of Justice has forced at least 23 medical marijuana dispensaries to close or to move at least 1000 feet away from any educational facility. In California and Montana the DOJ has gone even further, targeting businesses regardless of their distance from schools.

One thing that is clear is that even if Amendment 64 passes, marijuana possession will remain illegal under federal law. Possessing even one joint of marijuana is a misdemeanor punishable by up to a year in prison and a $1000 fine. A second possession conviction carries a mandatory sentence of 15 days.

It is in growing your own, though, where the difference between state and federal law will become stark if 64 passes. State law would allow someone to grow six plants and to possess all of the harvest. Federal law says even one plant is a felony, punishable by up to five years in prison and a fine of up to $250,000.

Paul Roach, spokesperson for the DEA, said the DEA does not have a position on the amendment. If it passes, Roach said the DEA will continue to enforce federal drug laws. “We don’t see that changing,” he said.

Local spokesperson for the Department of Justice, Jeff Dorschner, said “We don’t know what will happen if it passes. There are a variety of options, none of which I can discuss.” 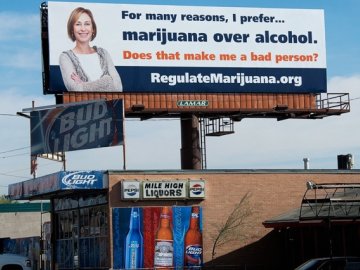 Governor John Hickenlooper announced his opposition to the measure on Sept. 12, pointing out that the feds may end up spoiling the party in any event:

“Federal laws would remain unchanged in classifying marijuana as a Schedule I substance, and federal authorities have been clear they will not turn a blind eye toward states attempting to trump those laws. While we are sympathetic to the unfairness of burdening young people with felony records for often minor marijuana transgressions, we trust that state lawmakers and district attorneys will work to mitigate such inequities,” Hickenlooper said in a prepared statement.

Roach says the DEA does not--and will not--focus on individual users, but rather “goes after significant drug trafficking organizations.” Just as that sometimes includes people and businesses involved in medical marijuana, he said it could also include businesses licensed to grow or sell under Amendment 64.

“They have scarce resources,” said pro-64 campaign co-director Brian Vicente. “Why would they focus on marijuana stores that were set up in direct response to a vote of the people?”

Betty Aldworth, advocacy director for the Campaign to Regulate Marijuana, said she thinks that ultimately the federal government will not interfere if a state legalizes marijuana.

She wrote in an email:

“There is no way to know what the federal government will actually do once a state declares it no longer wants to take part in marijuana prohibition. If they take a hard line and threaten to shut down the regulatory system if Colorado sets it up, the Colorado state government could choose to delay implementation of regulated cultivation and sales... That said, possession will be legal under state and local law, and federal officials have made it clear they do not have the resources to arrest and prosecute adults for possessing limited amounts of marijuana. We certainly hope the federal government will not interfere with efforts to regulate and control the product if voters make it legal under state and local laws.

“Ultimately, Colorado has the right, and it should be trusted, to control marijuana as effectively and responsibly as possible. The Controlled Substances Act specifically allows states to enact their own laws related to controlled substances:

No provision of this chapter shall be construed as indicating an intent on the part of the Congress to occupy the field in which such provision operates to the exclusion of the law of any State on the same subject matter, unless there is a direct and positive conflict between such provision and the law of the State so that the two cannot be reconciled or consistently stand together.

“The federal government could, if it chose to assert its power, arrest people acting in accordance with Amendment 64 (although it has said it does not have the resources to do so). But it is a far different thing for the federal government to sue to overturn the state law. It would essentially have to prove that the state is forcing citizens to cultivate, sell and use marijuana. (That is what would cause the "positive conflict.") Moreover, if the federal government sued to overturn the law, they would have to explain why their "federal scheme" involves keeping illegal drug dealers in business instead of allowing sales through licensed, regulated and taxed businesses. It is highly unlikely that they will go to court on behalf of the drug cartels if Amendment 64 passes. Colorado will be doing the right thing and the federal government will not stand in the way.”

When the similar Proposition 19 was on the ballot in California in 2010, the feds were outspoken about the fact that passage would not deter the DOJ or DEA from aggressively prosecuting marijuana cases in the state.

In a letter written by Attorney General Eric Holder on Oct. 13, 2010, to nine former directors of the DEA, Holder was blunt in his opposition to Proposition 19 and said the DOJ would not let state law stand in the way of the enforcement of federal laws:

“Let me clearly state that the Department of Justice strongly opposes Proposition 19. If passed, this legislation will greatly complicate federal drug enforcement efforts to the detriment of our citizens. Regardless of the passage of this or similar legislation, the Department of Justice will remain firmly committed to enforcing the Controlled Substances Act (“CSA”) in all states. Prosecution of those who manufacture, distribute, or possess any illegal drugs--including marijuana--and the disruption of drug trafficking organizations is a core priority of the Department. Accordingly, we will vigorously enforce the CSA against those individuals and organizations that possess, manufacture, or distribute marijuana for recreational use, even if such activities are permitted under state law.”

Vicente calls the idea that DOJ and/or the DEA would step in to shut down legal marijuana sales
“speculative nonsense.”

Drug defense attorney Rob Corry also downplayed the idea that the feds will go much beyond posturing. “Honestly, I don’t think the feds will do anything more than they have with medical marijuana. They will hassle some businesses and leave others alone. Right now they want to turn out young voters for Obama while paying lip service to parents who want the government to do their parenting for them.”

As to speculation that the feds might sue the state to block implementation of 64, he says the federal government would have no standing to do so. “This doesn’t amend federal law,” Corry said.

He said that even if the feds somehow stop the state from allowing businesses to openly sell marijuana, passage of the amendment will still make possession legal for adults. “Don’t underestimate how important that is all by itself,” Corry said. He also said that the fact that DOJ has not come out publicly against 64 is a tacit endorsement. “Their silence equals consent,” he said. “If they did come out against it, it would probably get us more votes in favor anyway.”

"People in this country are sick of prohibition, sick of using tax dollars to put people in jail for using marijuana.”

If Colorado or another state does legalize marijuana this November, Morgan Fox, spokesperson for the national Marijuana Policy Project, says it will force the feds to “rethink prohibition."

"I don’t see the feds fighting implementation of any of these state laws," says Fox. "People in this country are sick of prohibition, sick of using tax dollars to put people in jail for using marijuana.”

Vicente says that if two or more of the three states vote to legalize, it will send a real strong message. “It will be more of a mandate if two or three states pass it than if it is just one,” he said.