What can make many of Colorado's highways spectacular can also make them deadly. 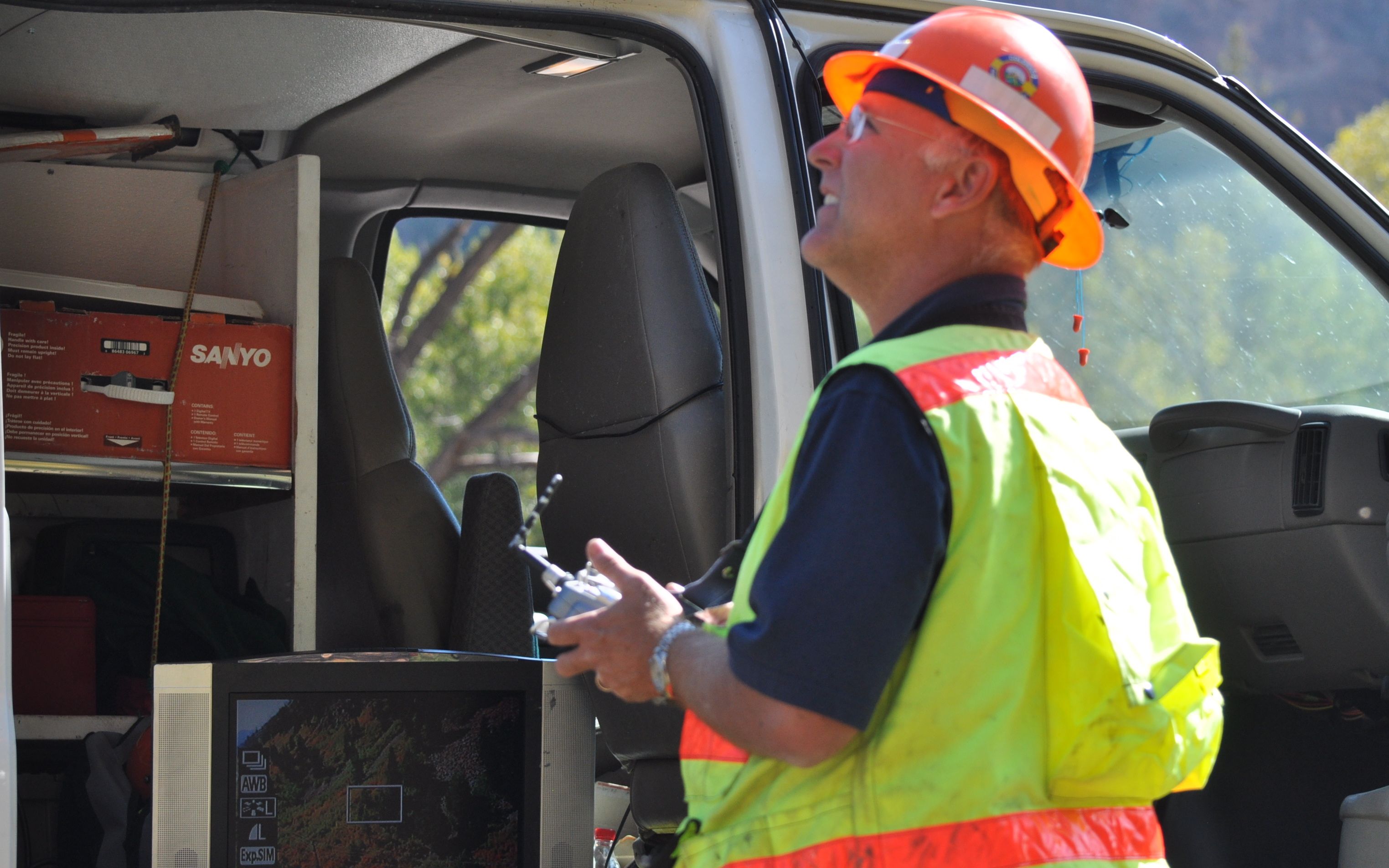 Particularly stretches of road that meander through canyons with walls that shoot high above, and where rocks of all sizes could at any moment come tumbling down. “Out of the Canyon,” the true story of an Aspen man who lost his family in a rock fall tragedy in Glenwood Canyon, is but one example. There have been nine fatalities as a result of rocks hitting cars on Colorado highways since 1999.

Armed with $4.13 million to mitigate rockfall hazards this year, the Colorado Department of Transportation is putting several projects in the fast lane, including I-70 at Georgetown Hill, where $1.4 million is earmarked.

In Glenwood Canyon, crews are repairing and improving existing rockfall fences along Interstate 70 with a $600,000 budget.

Over near Aspen, the state is spending $1.5 to drape netting on Shale Bluffs;. There are also projects on U.S. 285 in Turkey Creek Canyon near Bailey, where as much as $300,00 could be spent, and Highway 145 at Norwood Hill in the Telluride area, where $1.7 million is in the budget.

Crews are also evaluating Highway 133 over McClure Pass where they are considering rock scaling, blasting and netting. About $1.2 million is penciled in for the project, which could start in spring 2011.

A camera is rigged on the bottom of this bird.
Troy Hooper

To get a better perspective on work that needs to be done, CDOT employs a small fleet of remote-control helicopters and airplanes rigged with cameras that are used to snap aerial photos.

Last week, CDOT senior geologist Alan Hotchkiss stood on the side of Highway 82 looking at a monitor linked to a live-stream feed from the helicopter. He shot the photos based on what he saw in the monitor while helicopter technician David Wilbur maneuvered the bird above the zooming traffic.

“We come out here and rate rockfall sites every five years. We're also doing aerial photography of each site. Instead of just a ground view we have a view from the air of what that entire site looks like and what some of the things may be causing the rockfall so at a later time we can come back and mitigate those things,” Hotchkiss explained. “These pictures are great to take because what it allows us to do is take a picture in time to see what it looked like a year, five years, 10 years, 20 years from now.”

The remote-control helicopters and airplanes cost about $3,500 and $5,000, respectively, and are built by Wilbur, who started Eye in the Skye Aerial about 18 years ago. CDOT is his only customer. 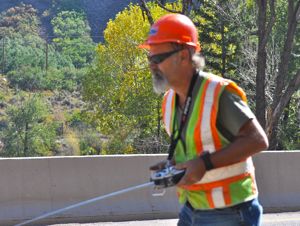 Dave Wilbur at the controls.
Troy Hooper
“It used to be fun, but now it's a job. It's very, very serious,” Wilbur said.

Officials have identified 756 rockfall sites in Colorado based on traffic data, geology and hazards.

Hotchkiss and Wilbur are documenting all of them with aerial photographs.

“It's a quick operation,” Hotchkiss said. “We're rarely in a location longer than 5 minutes, then off we go.”

I can see that you are an expert at your field! I am launching a website soon, and your information will be very useful for me.. Thanks for all your help and wishing you all the success in your business. INDIAN E VISUM

Some truly wonderful work on behalf of the owner of this internet site , perfectly great articles . india visa customer support

Wow! Such an amazing and helpful post this is. I really really love it. It's so good and so awesome. I am just amazed. I hope that you continue to do your work like this in the future also ΤΟΥΡΙΣΤΙΚΗ ΒΙΖΑ ΝΕΑΣ ΖΗΛΑΝΔΙΑΣ

I think this is an informative post and it is very beneficial and knowledgeable. Therefore, I would like to thank you for the endeavors that you have made in writing this article. All the content is absolutely well-researched. Thanks... india visa from norway

You delivered such an impressive piece to read, giving every subject enlightenment for us to gain information. Thanks for sharing such information with us due to which my several concepts have been cleared. PROCESI ONLINE VIZA INDIAN

I think this is an informative post and it is very beneficial and knowledgeable. Therefore, I would like to thank you for the endeavors that you have made in writing this article. All the content is absolutely well-researched. Thanks... VISTO D'INGRESSO IN AMERICA ONLINE

I have bookmarked your blog, the articles are way better than other similar blogs.. thanks for a great blog! indian visa for belgian citizens

It is truly a well-researched content and excellent wording. I got so engaged in this material that I couldn’t wait reading. I am impressed with your work and skill. Thanks. کینیڈا ویزا درخواست آن لائن۔

I wanted to thank you for this great read!! I definitely enjoying every little bit of it I have you bookmarked to check out new stuff you post. ASV BIZNESA VĪZA

I think this is an informative post and it is very useful and knowledgeable. therefore, I would like to thank you for the efforts you have made in writing this article. Turistické vízum do Turecka

It is my first visit to your blog, and I am very impressed with the articles that you serve. Give adequate knowledge for me. Thank you for sharing useful material. I will be back for the more great post. Visa res in India

I just found this blog and have high hopes for it to continue. Keep up the great work, its hard to find good ones. I have added to my favorites. Thank You. KANADA TOERISTEVISUM

I wanted to thank you for this excellent read!! I definitely loved every little bit of it. I have you bookmarked your site to check out the new stuff you post. Turkijos vizos prašymas internetu

I got too much interesting stuff on your blog. I guess I am not the only one having all the enjoyment here! Keep up the good work. ויזת תייר לקנדה

Today, I was just browsing along and came upon your blog. Just wanted to say good blog and this article helped me a lot, due to which I have found exactly I was looking. Βίζα επισκεπτών Τουρκίας

Nice to be visiting your blog again, it has been months for me. Well this article that i’ve been waited for so long. I need this article to complete my assignment in the college, and it has same topic with your article. Thanks, great share. NEW ZEALAND VISA APPLICATION ONLINE

Everything has its value. Thanks for sharing this informative information with us. GOOD works! new zealand tourist visa

This is my first time visit here. From the tons of comments on your articles,I guess I am not only one having all the enjoyment right here! indian visa from greece

You completed a few fine points there. I did a search on the subject and found nearly all persons will go along with with your blog. Барномаи раводиди Канада

very interesting post.this is my first time visit here.i found so mmany interesting stuff in your blog especially its discussion..thanks for the post! துருக்கி விசா விண்ணப்பம்

This is very educational content and written well for a change. It's nice to see that some people still understand how to write a quality post.! ОНЛАЙН-ФОРМА ВІЗИ НОВОЇ ЗЕЛАНДІЇ

All your hard work is much appreciated. Nobody can stop to admire you. Lots of appreciation. Турска виза онлайн

I just want to let you know that I just check out your site and I find it very interesting and informative.. Intian yritysviisumi

Thank you for some other informative blog. Where else could I get that type of information written in such an ideal means? I have a mission that I’m just now working on, and I have been at the look out for such information. Заяўка на атрыманне візы ў Канаду онлайн

Positive site, where did u come up with the information on this posting?I have read a few of the articles on your website now, and I really like your style. Thanks a million and please keep up the effective work. કેનેડા વિઝા પ્રશ્નો

I’m going to read this. I’ll be sure to come back. thanks for sharing. and also This article gives the light in which we can observe the reality. this is very nice one and gives indepth information. thanks for this nice article... Merchant Services ISO

Thank you for taking the time to publish this information very useful! Visa Medical India

You understand your projects stand out of the crowd. There is something unique about them. It seems to me all of them are brilliant. selling merchant services

Wow, this is really interesting reading. I am glad I found this and got to read it. Great job on this content. I like it. KANADA GİRİŞ VİZESİ