RealAspen News and Community Content Feed
By Real Vail
Real Aspen – August 25, 2012
In a battle to the finish, Stage 6 of the 2012 USA Pro Challenge came to a close when Rory Sutherland (AUS) of the UnitedHealthcare Pro Cycling Team crossed the line at the top of Flagstaff Mountain in Boulder first, followed by Fabio Aru (ITA) of Astana Pro Team and Jens Voigt (GER) of RadioShack-Nissan-Trek.

In what has been a constant battle for the overall lead, defending champion Levi Leipheimer (USA) of Omega Pharma-QuickStep heads into the final day of the race wearing the Exergy Leader Jersey, nine seconds up on Christian Vande Velde (USA) of Garmin-Sharp-Barracuda and 21 seconds ahead of Tejay van Garderen (USA) of BMC Racing Team.

“Today was amazing; I saw all kinds of colorful characters up on Flagstaff and it was inspiring,” said Leipheimer. “I knew I had to save my strength for today. When I was nearing the finish, I just focused on giving it everything I had. Today was one of the most beautiful days of cycling I've ever seen.” 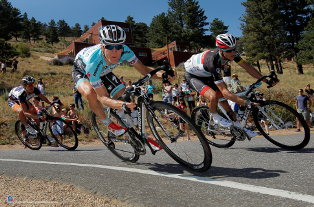 The penultimate stage of the 2012 USA Pro Challenge took the riders from returning host city Golden to one of the most legendary cycling cities in the U.S. – Boulder – on a 102.8m/165.5 km route that included the epic climb of Flagstaff Mountain. Featuring three Waste Management sprints and two Nissan King of the Mountains competitions in addition to Flagstaff, the stage was challenging and hotly contested.

The stage began with several attacks and counter-attacks, but nothing stuck until a 14-man breakaway that would last for a good part of the stage. Upon reaching the first Waste Management sprint in Boulder, Serghei Tvetcov (MOL) of Team Exergy crossed the line first, followed by Sutherland and Stage 4 winner Jens Voigt (GER) of RadioShack-Nissan-Trek.

Descending at speeds of up to 62 mph, the break screamed down the hill toward the second Waste Management sprint line of the day in Lyons, where Tvetcov took max points, followed by Timmy Duggan (USA) of Liquigas-Cannondale and Voigt.

After making the turn onto Lefthand Canyon, Voigt launched an attack with his teammate George Bennett (NZL) to ultimately spring Bennett into a solo break heading toward the second KOM of the day – Cat. 2 Lee Hill Rd. (7,008 ft.). With only seven riders left in the original break, Bennett crested the hill first, followed by Colorado and Voigt.

With only two minutes over the field, the break saw several attacks heading toward the final Waste Management sprint of the day in Boulder, which was taken by Voigt, followed by Tvetcov and Aru. With Voigt out slightly in front of the break, Sutherland launched an attack that would take him out in front and lead to him powering up the mountain all the way across the finish line.

“Flagstaff is such a beautiful mountain,” said Sutherland. “I can't even describe the beauty of cycling in Colorado and how much it means to win in my hometown of Boulder. This is definitely the biggest win of my career.”

In a battle for the general classification, with about 5 km to go attacks were launched off the front of the field, which allowed Leipheimer to pull away and take fourth in the stage, placing him at the top of the GC.

“The competitive level of racing we've seen at the 2012 USA Pro Challenge has made it one of the closest major stage races in the history of the sport,” said Shawn Hunter, CEO of the Pro Challenge. “With Levi taking over the lead today under the picturesque backdrop of Flagstaff Mountain and the largest, most enthusiastic crowds I've ever seen at a U.S. stage race cheering him on, we couldn't have asked for a better day of racing.”

As part of the awards ceremony actor Patrick Dempsey presented Leipheimer with the Exergy Leader Jersey.

“With the individual time trial tomorrow in Denver, it is still anyone's race,” added Hunter. “We're primed for an incredibly exciting finish to the 2012 USA Pro Challenge.”

After a tough week of racing over mountains at high altitude, the Stage 7 Individual Time Trial will be a completely different kind of race – and one that could dramatically change the results. By taking the team factor out of the race, this flat and fast course in downtown Denver will have those looking to take the overall win facing a tough individual test, making this one of the most exciting finishes possible.

Using many of the same roads as the final Denver finish circuits of 2011, the course will provide a challenge for the riders and fantastic viewing opportunities for race fans. Starting at one-minute intervals, with the final riders going off at two minutes, near the State Capitol Building in Denver's Civic Center Park, the riders will first face a familiar out-and-back section along Speer Blvd. and Colfax Ave., with a slight detour through the entertainment district along Larimer Street.

Returning toward the start area on Colfax, the riders will turn north to 17th Ave. and a long section of straight road, eventually delivering them to City Park. A short, but technical run through the park will return the riders to 17th Ave., allowing spectators to see their favorite riders pass by again. Two quick turns will put the riders back on Broadway headed south to the finish line adjacent to Civic Center Park.

How to Watch the 2012 USA Pro Challenge

In addition to the broadcast, fans can follow the 2012 USA Pro Challenge with the RadioShack Tour Tracker. Available on the race website, as well as through a free download on iTunes and Google Play, the Tour Tracker includes:

* Live video coverage of every stage