The 2010-11 ski season was the fourth best ever after record snowfall at most Colorado resorts. The 2011-12 season saw record low snowfall totals as a major snow drought gripped most of the state and the nation. 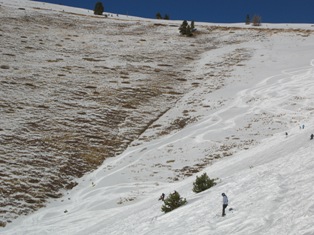 Vail's Back Bowls didn't open until January because of a lack of snow.
David O. Williams

“Fortunately, seasons such as the one just ended have proved to be historically rare and the ski industry has exhibited a remarkable ability to bounce back after poor snow years in the past.” CSCUSA President and CEO Melanie Mills said in a press release.

“This was one of the most challenging weather seasons in the history of the United States ski industry marked by historically low snowfall and one of the mildest winters on record,” Vail Resorts' CEO Rob Katz said in a press release at the time. “In the face of these unprecedented conditions, we were very pleased with the resiliency demonstrated in our business.”

Colorado's Western Slope experienced its third driest and seventh warmest winter dating back to 1895, according to CSCUSA, Precipitation on the Western Slope was 43 percent below average this past winter.

“Much of the ski industry in the U.S. was confronted with weather challenges last year, but several of our resorts bucked the national trend and showed signs of resilience during what was clearly an uninspiring winter,” CSCUSA's Mills said.