"The cost to Colorado taxpayers and our economy that would result from the development of the Flaming Gorge pipeline would be devastating. This project would also increase the risk of a compact call that would hurt our state's water users,” the letter (pdf) from 118 affected businesses reads. 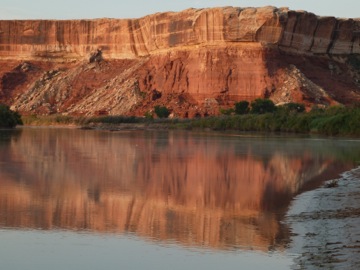 The Green River is a principal tributary to the Colorado River. (Photo by Brent Gardner-Smith/Aspen Journalism)

A state task force convened in January to review the proposal and it is set to finish in December.

“The state's task force is focused only on one increasingly controversial idea — the Flaming Gorge pipeline proposal,” said Molly Mugglestone, coordinator for Protect the Flows, in a prepared statement. “But to come up with the most effective solutions on future water usage we must apply a broader, more inclusive framework, like the one that was applied in achieving the newly completed agreement between Denver Water and West Slope interests.”

A study by Western Resource Advocates indicated that the pipeline would take nearly a quarter of the Green River's flow, resulting in a $58.5 million dollar annual loss to the region's recreation economy. That same study reported that the water delivered to the Front Range by the pipeline would have to be sold at a price that is the most expensive in Colorado's history. The threat of diversions has made the Green the nation's second most endangered river, according to one group.

Messages left for Hickenlooper's spokespeople were not immediately returned.