RealAspen News and Community Content Feed
By David O. Williams
Real Aspen – May 14, 2012
While Colorado's residential real estate market as a whole is slowly climbing out of an historically deep hole, Eagle County remains mired in the depths of a housing crash that started late in 2008.

Eagle County – home to Vail and Beaver Creek ski areas – was the second worst county in the state in terms of foreclosure sales during the first three months of 2012. Only tiny San Juan County in southwestern Colorado had a higher percentage of homes sold in foreclosure auctions in the first quarter of 2012, according to a recent report issued by the Colorado Division of Housing (pdf).

“Several mountain counties are still dealing with growth in foreclosure activity, and may not have peaked yet,” Colorado Division of Housing spokesman Ryan McMaken said in a press release. “The Front Range, however, which drives the overall statewide totals, looks like it peaked back in 2010.” 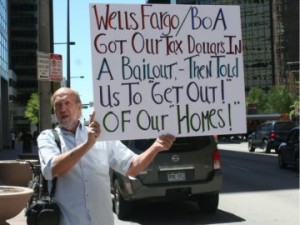 Statewide, foreclosure auction sales were down 25 percent compared to the first quarter of 2011. But 16 Colorado counties – mostly in the mountains – registered continued growth in foreclosure sales.

According to a recent market analysis by Land Title Guarantee Company (pdf), March saw the highest number of overall real estate transactions of any month so far this year (102), but 17 of those were bank sales. So far there have been 56 banks sales through the first quarter of the year for a total of $15 million. The average foreclosure sales price in 2012 has been $273,421.

While things are improving on Colorado's Front Range, homeowner anger and frustration with institutions such as Wells Fargo and Bank of America continues to bubble to the surface. Protesters targeted a Wells Fargo in Denver last week.

Eagle County, CO is the second-worst spot for foreclosures in the first quarter of 2012, according to RealtyTrac. Here you can check this stump removal and get more helpful tricks about trees removal. Eagle County comes in behind Denver, which is no surprise considering that Denver has a far larger population. But it surprised me to see Eagle County number two on the list. While it's true that Montrose is a business town rather than a tourist town, I'm sure that Montrose's economic downfall had an effect on the numbers.

The Eagle County has a population of just over 10,000 people and last year there were more than 400 foreclosures. This is an increase from 2010 when there were 341 foreclosures.

Get your paper written by a professional writer at an affordable price. A BestCustomWriting.com writing service to help you make that deadline. Affordable prices and 24/7 customer service.