RealAspen News and Community Content Feed
By Troy Hooper
Real Aspen – May 8, 2012
Gnarly terrain greeted a group of climate change activists in Aspen over the weekend.

With skis strapped to their feet, the activists maneuvered around racing gates and through the grass and dirt on Aspen Mountain, where snow has mostly melted and the ski season closed weeks ago.

It was all part of an event called “Protect Our Winters: Connect the Dots,” which included speakers and activities that linked climate change with pine beetle infestations, wildfires, drought, record high spring temperatures and decreased snowpack in traditionally wet, cold places.

The snowless ski race was held to demonstrate what the sport's future could look like if the earth continues to warm. 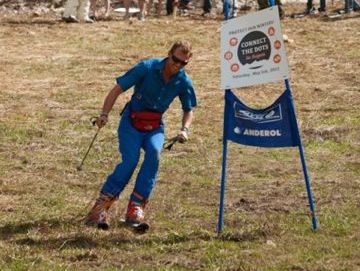 Micah Davis participates in the snowless ski race in Aspen on Saturday. (Image via 350.org)

"I am from New England where they just had one of their shortest winters in history following historic flooding brought on by weather extremes," said racer Elle Noordzy. "I grew up skiing and in nearly two decades in southern New England I saw the impact of warmer winters, where we used to get feet of snow in a winter to almost none nowadays. And now my first winter in Colorado has again highlighted weather extremes with one of the worst snow years and record-breaking spring temperatures."

Aspen has become a stage for the climate discussion.

There is buy-in from its business community, government officials and residents who have set goals to try to reduce their own carbon footprints. The Aspen Skiing Co., which helped organize the weekend's climate-awareness activities along with 350.org, has been a leader in the industry, setting its green standard. As an influential member of the Aspen Chamber Resort Association, the ski company recently rallied other local business leaders who sit on the chamber's board to drop its affiliation with the U.S. Chamber of Commerce to protest the national group's stance on climate change. Even former Vice President Al Gore's scatological rant against climate change deniers last year took place in Aspen and drew national attention. And Aspen's celebrity athletes have gone to the nation's capitol, lobbying for stricter pollution controls.

“Climate change is already pounding businesses and communities, whether you're a ski resort, an insurance agency, or a raft business,” said Auden Schendler, the Aspen Skiing Co.'s vice president of sustainability. “But people feel powerless about how to drive change. On Saturday we made a statement elected officials have to listen to, and similar events happened all over the globe.”

To connect the dots between climate change and its impacts, attendees in Aspen wore white clothing to symbolize the missing snow and they formed a “dot” on the ski mountain. Other human “dots” were created in oceans and on land around the world Saturday to spread the climate message.

A recent Yale University poll in the U.S. found that concern about climate change was increasing with more extreme weather and warmer temperatures. According to the research, 82 percent of Americans report that they personally experienced one or more types of extreme weather or a natural disaster in the past year. Meanwhile, nightly news coverage of climate change on the major TV networks decreased 72 percent between 2009 and 2011, according to Media Matters for America.

“Most people in the country are looking at everything that's happened; it just seems to be one disaster after another after another,” Anthony A. Leiserowitz of Yale University, one of the researchers who commissioned the poll, told the New York Times. “People are starting to connect the dots.”

Oh Goodness, only in Aspen. When are people going to realize that the "Green" movement is all about the "green"? Dollar bills are to be had, and environmentalists want some of that dough too. Great read Troy!

The article posted was very informative and useful. You people are doing a great job. Keep going. 바카라

Many individuals express interest in creating their own pixel art designs, but they don't know where to begin. Pixelart123 is a website that lets you make pixel art patterns from its templates and then print them on paper or fabric to produce your own items. You can now create projects for yourself or as gifts in a matter of minutes!