RealAspen News and Community Content Feed
By Troy Hooper
Real Aspen – April 23, 2012
A congressional push to expand wilderness and special management designations in the White River National Forest received the endorsement of a major stakeholder in the region: Vail Resorts.

The ski resort juggernaut announced late last week that it has teamed with the Colorado Environmental Coalition and other groups in supporting U.S. Sen. Mark Udall, D-Colorado, and U.S. Rep. Jared Polis, D-Colorado, who are seeking better protection and management of up to 175,000 acres of ecologically important lands in Eagle and Summit counties, where Vail Resorts operates.

“Business support for this initiative will be critical to its success. Coloradans have long understood the link between a healthy environment and a healthy economy,” Elise Jones, executive director of the Colorado Environmental Coalition, said in a prepared statement. 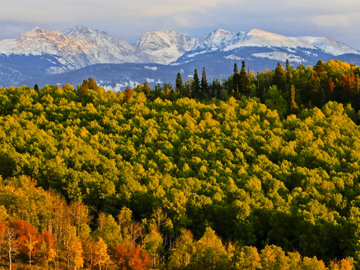 Udall and Polis have asked the public to help them craft a pair of public-lands bills: The Central Mountains Outdoor Heritage Act, which considers 32 pockets in Eagle, Pitkin and Summit counties for wilderness protection, and the Arkansas River Canyon National Monument and Browns Canyon Wilderness proposal between Salida and Buena Vista in south-central Colorado.

The areas under consideration in Eagle and Summit counties have been identified as important ecological areas that provide wildlife habitat and serve as invaluable watersheds for the region. The legislation would protect Hoosier Ridge near Breckenridge and West Lake Creek outside of Edwards.

“The special nature of the economies in Colorado's resort communities relies on the successful balance of offering thoughtfully developed recreation opportunities on our public lands with the preservation of pristine wilderness areas,” said Beth Ganz, Vail's vice president of public affairs and sustainability. “Vail Resorts is proud to support this effort to strike that important balance.”

“It's the right thing that Vail Resorts is stepping in with their support as this proposal takes into consideration the collaboration among many key stakeholders,” Town of Breckenridge Mayor John Warner, who attended Udall's unveiling of the bills in February, said in a prepared statement. “The proponents of the identified additional wilderness areas really listened to the mountain bike community and preserved trails for them. They also listened to the municipal community so that watersheds could be adequately protected. These wilderness areas are a great addition for Summit County.”

Udall has said he is soliciting feedback and there is no deadline for the bills to be formally introduced.

Vail Resorts joins a growing list of businesses and economists that have come out in favor of public lands protection, noting the synergy between Colorado's environment and economy.

“Vail Resorts has to weigh the interests of its customers and employees, as well as the communities it partners with, before backing any type of public lands initiative,” added Michael Carroll, associate director at The Wilderness Society. "This endorsement shows yet again that Sen. Udall's proposal is good for the environment and the economy."

Here is why students should travel during semester breaks. I think that anyone will surely find the answer to this question here. The fact is that this article describes in detail all the advantages of such activities.