For Shiffrin, who grew up in the Vail Valley but attended Burke Mountain Academy, this is her second straight award handed out to the top female and male skiers in the East every year since 1969.

The winners will be officially recognized at the New England Ski Museum in Franconia, N.H. on June 1, during a 5-7 p.m. ET ceremony.

"This season has been a whirlwind of experiences," Shiffrin said. "It was all ends of the spectrum. I had a lot of amazing results and I'm really happy to get those in there because it made this season - as my rookie season - worth all the hard work." 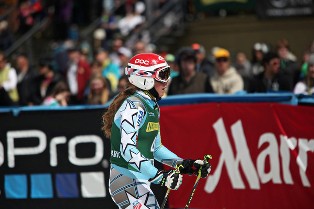 "All I can say to young athletes who are aspiring to accomplish great things is you just have to give it everything you have," Shiffrin said. "It's worth it; it's worth every bit of the hard work that you put in."

"The Golden Ski Award is the oldest honor given to alpine ski racers that exists today," said Jim Gregory, Chair of the ESWA's Golden Ski Award Committee. "It has been presented to top ski racers from the East since 1969, the year after the modern World Cup circuit started.

"Many of the Golden Ski winners have gone on to World Cup gold as well. We are proud to honor Mikaela Shiffrin and Ryan Cochran-Siegle, two extraordinary athletes, and look forward watching them set the bar even higher as they pursue their careers on the slopes."