RealAspen News and Community Content Feed
By Troy Hooper
Real Aspen – April 11, 2012
A shrinking ski season and impaired agriculture industry may be in Colorado's future, but a new report warns the state's preparations for climate change are disjointed and not nearly stringent enough.

There were 15,272 warm temperature records broken in the United States last month alone, according to data the National Oceanic and Atmospheric Administration released today. Every state in the nation broke at least one heat record in March, federal climatologists said. The first three months of 2012 were the warmest on record in the contiguous United States, they added, noting temperatures 6 degrees warmer than the long-term average. March's temperatures were 8.6 degrees above normal. 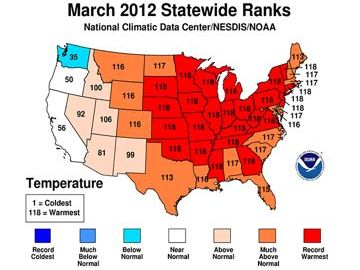 In Colorado and numerous other states where snow-covered slopes equate to an influx of tourist dollars, ski resorts are closing earlier than usual this year, plagued by muddy, grassy terrain. Colorado State University climatologists say 98 percent of the state is experiencing varying levels of drought.

“The potential economic impacts to the state from climate change are significant,” the Natural Resources Defense Council report states. “In 2007, winter recreation alone contributed nearly $2 billion to the Colorado economy. Warmer temperatures could lead to less snow and a shortening of the ski season. In fact, a 2006 study projected a loss of 43 percent to 82 percent in April snowpack for Colorado counties with ski resorts by the end of the 21st century.”

Escalating temperatures and dwindling water supplies are projected to intensify, according to the report, and together they will put the state's $5.5 billion agricultural industry in jeopardy. This spring, the oil and gas industry outbid farmers at Colorado's premier auction for unallocated water.

Meanwhile, the extended drought is fueling a wildfire season that has gotten off to an early start. Last month's dry conditions have been compared to April 2002, which triggered massive fires across the state. The unusually warm winter is raising the specter of the worst wildfire season in a decade.

It was a scorcher of a winter for many of the lower 48 states. Twenty-five of them, all east of the Rockies, recorded their warmest first quarters ever, and another 16 states ranked it among their 10 hottest. It was the warmest January through March ever for Boston, Chicago and Washington, D.C.

Alaska was the exception to the rule. It had its ninth-coolest January-March period, with temperatures 5.2 degrees below average, NOAA reported. The Last Frontier was slammed with snow this winter.

"Colorado should implement concrete measures to achieve these pollution reduction goals and lessen the state's contribution to climate change," the report states.

The Colorado Flood Hazard Mitigation Plan does not include climate change considerations, according to the Natural Resources Defense Council, which noted other shortcomings.

The report adds: "Colorado should make it a priority to include climate change in future water planning efforts for other river basins in the state beyond just the Colorado River Basin."