RealAspen News and Community Content Feed
By Troy Hooper
Real Aspen – April 6, 2012
The prescribed burn that roared out of control in the foothills outside of Denver, claiming the lives of three area residents and scaring hundreds of others is just the beginning of what could be a frighteningly long fire season in Colorado.

About 98 percent of the state is experiencing varying levels of drought, Colorado State University climatologists confirmed this week, noting the Arkansas and Rio Grande river basins are especially dry, as are areas in the central and northwestern mountains due to an unusually lean snowpack. Snowpack in the Colorado River basin is currently about 45 percent of average annual levels.

In Eagle County on Thursday, officials say a cigarette tossed from a car window likely caused a one-acre wildfire that authorities quickly snuffed out. But April is not typically fire season in the high country. 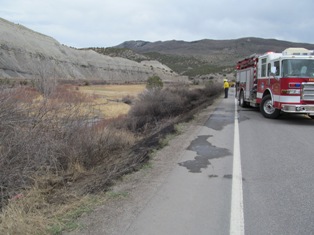 A wildfire scorched about an acre of grass in Wolcott on Thursday.
Eagle County Sheriff's Office

“Right now the drought situation looks pretty ugly,” said Ken Neubecker, director of the Carbondale-based Western Rivers Institute. "It's worse right now here in the Roaring Fork Valley than it was in 2002 and that was a pretty bad year for fires.”

Law enforcement agencies are investigating the Colorado State Forest Service's handling of the prescribed burn that officials admit reignited unexpectedly and sparked the deadly Lower North Fork blaze in Jefferson County. Gov. John Hickenlooper has also convened a four-person review board led by Bill Bass, a 35-year veteran of the U.S. Forest Service, to examine details of the tragedy.

“Wildfire season usually starts much later in the year in Colorado, and this could very well turn out to be one of the worst,” U.S. Sen. Mark Udall, D-Colorado, said in a prepared statement issued after he toured the fire wreckage Friday. “The dry and gusty conditions that have fueled this fire and others that have broken out around the state are warning signs that it may be a very long firefighting season."

As the earth warms, climatologists say extreme weather events are to be expected. Floods, wildfires, hurricanes, droughts and heavy, wet snow dumps are all more likely in the years to come, they say.

“In my mind, this drought is definitely linked to climate change,” Neubecker said.

“You can't really prove one particular weather event is linked to climate change but this year's extremely dry winter is following a broader trend. The last couple of years we've had pretty good snowfall but there's a chance the heavy snowfall was the anomaly, not the dry years, and the dry years will be the new normal.”

The snowpack at most of Colorado's ski areas is thin, forcing several resorts to shut down earlier than usual this year as brown grass overtakes white snow on lower-lying slopes. The same is true for many ski resorts across the nation outside of Alaska, which has been slammed with copious deposits of snow this winter.

There is ample time for some parts of the state to absorb enough moisture and lower the risk of fire, experts note. But they say April 2002 was similar to March of this year. And that's ominous news when you consider that a decade ago Colorado braved the most destructive fire season on record.

“It's pretty early for the snowpack to be melting,” said Wendy Ryan, a research associate in Colorado State University's Climate Center. “We've seen stream flows come up, which is not normal for this time of year. To exacerbate things, we had one of the warmest and driest Marches on record.”

In Fort Collins, last month was the first March in 124 years with no measurable precipitation.

“Wildfire is definitely something we have to worry about in Colorado. It's not always associated with drought, but in this case we can definitely point to short-term dryness that is leading to fires,” she said.

The National Interagency Fire Center's most recent report (pdf) shows many parts of the nation are susceptible to conflagrations this year. Low levels of precipitation are forecast over portions of the Rocky Mountains, the report states, and above-normal temperatures are likely across most of the Southwest and Great Basin, and the Gulf and East Coast states from Texas to Maine through July.

“Above-normal significant fire potential is forecast over portions of the Rocky Mountain Area during April, mainly during the early portion of the month. … Although precipitation opportunities are expected as well, amounts are not anticipated to be enough to compensate for the abnormally dry and warm conditions that have depleted snowpack and stunted greenup thus far,” the report says.

Increased fire danger is expected to reemerge in western Colorado in June and July, the report said.

Sen. Udall is stressing the following three points for Coloradans this spring and summer:

"Recreate Responsibly: Err on the side of caution. Don't leave campfires unattended, think before doing anything that could cause a spark in the backcountry and avoid outdoor burning. Be aware of fire risk by watching for posted warnings, and take responsibility for obeying restrictions in your area.

"Prepare Your Property for Fire: If you live in a high-risk area, you can take precautionary steps to protect your homes from fire, such as installing fire-resistant roofing and creating defensible space around your home, including carefully storing firewood and other flammable objects. Remember, the most important tool is not a chainsaw; it is a rake and a weed-wacker to remove things like pine needles and grasses from your home and deck.

"Prepare in Advance for An Evacuation: Hundreds of homes have already been evacuated early in this season, and it can be a harrowing process. Families can cut down on stress by implementing an evacuation plan that ensures the safety of people and essential belongings. If you have neighbors who are elderly or have special needs, consider them in your plans too."