As ski season melts away, climate change debate heats up

RealAspen News and Community Content Feed
By Troy Hooper
Real Aspen – April 5, 2012
ASPEN — Flowers are blooming along the sidewalks. Snow on the mountains is melting fast.

Residents here aren't sure whether to ski or golf.

But most of them are certain of one thing: Climate change is not a hoax.

The Aspen Skiing Co., the mayor, a pair of county commissioners and many residents in town are pressuring the Aspen Chamber Resort Association to quit paying dues and divorce itself from the U.S. Chamber, which has aggressively lobbied against climate legislation over the years. The 680-member local chamber wrote a letter to the national group in 2010 delineating its political differences, but the debate this ski season — the driest one here since 1976-1977 — has become far more heated.

“The U.S. Chamber is the largest right-wing, climate-denying corporate front group on the planet. And Aspen supports it. Why?” asked Auden Schendler, the ski company's vice president of sustainability. “Now is the time to actually do something that matters on climate. Aspen can be the Keystone XL of the Chamber fight.”

Other small chambers have left the national chamber but none in Colorado or with Aspen's profile.

For now, the Aspen chamber won't be defecting. Officials say that while they fundamentally disagree with the U.S. Chamber's stance on climate legislation, they still value the group's administrative services.

Winter didn't stick around long in these parts. It arrived late and left early. 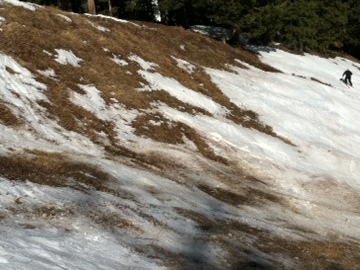 Colorado's snowpack is 59 percent of the average, according to a Denver-based National Resources Conservation Service report last week. Grass has overtaken the lower sections of many slopes, forcing ski patrollers to rope off much of the terrain earlier than usual this year. It's T-shirt weather.

This year's snow-starved winter in Colorado was preceded by one of the better ski seasons on record. Last year's massive snowpack allowed skiers in Aspen to schuss all the way into June, even as downstream communities — Basalt, Carbondale and Glenwood Springs — braced for flooding.

Climatologists say wild swings in weather are to be expected as the earth warms. Floods, fires, hurricanes, droughts and snow dumps are indicators of this brave, new world of climate disruption.

What it means for skiers and snowboarders is there could be more winters like this one. But there could also be epic winters like last year, too. Climate change's broader effects cause more worry.

“Killington's base lodge was destroyed by flooding from Hurricane Irene,” Schendler said. “The roads in Vermont were flooded away. Wait a minute — nobody said climate change would physically destroy ski resorts! We were worried about snow going away! In fact, the concern for the industry is deeper than that. What if, as a result of fires and floods, storms and droughts, we become a kind of survival society — where we are always responding to disaster, fixing bridges and roads, sumping the basement — and as a result we don't have the time, or the money, to go ski. Well, you could say 'boo hoo, I'm so sorry for you!' but in fact leisure, fun and other ancillary aspects of society are what make societies vibrant and successful. They are the cutting edge of creativity and thought."

Changing temperatures don't just affect ski resorts in the winter. The forests that engulf them in the summers have been ravaged by bark beetles that thrive in warmer environs. The insects are sucking the life out of forests, leaving them more vulnerable to wildfires and changing them from green to brown. Foresters are having to devote more resources to combat climate change.

In 2008, the Aspen Skiing Co. and Vail Resorts announced ambitious plans to cut their resorts' carbon emissions using a wide range of inventive energy measures designed to prolong their survival.

Now, the first returns on those pledges are coming to light.

Vail Resorts says it was able to reduce its electricity and natural gas usage by 10.75 percent in three years through more efficient operations. The company's goal was to cut emissions 10 percent.

Vail Resorts says its energy savings so far are equivalent to the annual energy usage of 1,400 average U.S. homes and has allowed the company to reduce its carbon dioxide emissions by 22,801 metric tons a year. The company didn't adjust its baseline to include its recent acquisitions of resorts in Lake Tahoe, Calif., but Vail is aiming to reduce its energy consumption another 10 percent by 2020 and a spokeswoman said the company will include its new properties in that effort.

In Aspen, where the company has adjusted its baseline to include a new lodging property and new chairlifts, it is looking less likely resort officials will reach their goal to cut emissions 10 percent by the end of the year. A preliminary estimate of 2011 saw emissions reduced by 1,093 tons, or 3.5 percent.

“I think the next step, for Vail, and for the industry, is to become activists on climate,” Schendler said. “It's uncomfortable, seems outside the scope of the organizational mission, irritates people, and isn't all that much fun. But it is essential for the survival of the industry.”

An industry that flies customers in from around the world to ride coal-powered lifts faces a complex and difficult challenge when trying to balance business with climate-conscious behavior.

"We can't just wave a magic wand and make energy intensive industry go away, (nor would we necessarily want to do that — Aspen's economy would go away and I wouldn't be able to send my kids to college) so we might as well try to reduce our emissions along with the Microsofts, Starbucks, and GEs that also are very energy intensive,” Schendler said. “The key point is that a ski resort's lever on climate and energy issues isn't reducing their own emissions, though that is good and necessary, but instead using the platform of the ski industry to lobby for policy change that will help move us forward. A carbon tax, for example, will make efficiency more profitable and help us deal with the huge energy intensity of our business model, airplanes included. We lobby for a price on carbon and so should the rest of the industry. And, by the way, the rest of the [ski] industry will.”

A-list winter athletes such as Aspen's Chris Davenport and Gretchen Bleiler have taken it upon themselves to ask Congress for climate legislation. They say their careers depend on it. Keeping up with World Cup ski racing in recent years has meant keeping up with which resorts have any snow.

The Elk Mountains Grand Traverse, a race that starts in Crested Butte and ends in Aspen, was set to begin last Friday but the starting line was moved from historic old town to Crested Butte Mountain Resort, where there is a higher elevation. Contestants have been warned there will be sections of the course where they'll have to click out of their skis and walk across miles of snow-barren backcountry.

But canceled sporting events pale in comparison to the region's bigger climate consequences.

Aspenites are worried. But they are also keeping their sense of humor.

“The warmest summer I ever spent,” joked longtime local John Fray, "was this winter in Aspen."

1 Comment on "As ski season melts away, climate change debate heats up"

Climate change is not a hoax? Of course its not Troy. This rock has been floating around the universe for 4.5 billion years. Earth's climate has changed thousands of times before man was walking, and a thousand times after. Its hard to get worked up over a warm, dry winter after having a stormy winter in 2010-2011. In fact, the yearly average was hit for Vail/BC, it just happened to be two separate extreme winters. What's wrong with the "green" movement is that it was set up by politicians and lobbyists. To do one thing, make money. I have no problem with all of the green policies and the like, as long as it comes for FREE. But if I have to pay astronomical prices for something that is "Earth Friendly". No thanks. She'll survive on her own.