But the Colorado Department of Public Health and Environment says its issuance of the first radioactive materials license in the United States since the Cold War was perfectly legal and followed “a robust public process” that included two public hearings and six additional public meetings.

Warren Smith, a spokesman for the state agency, said in an interview last week that the U.S. Nuclear Regulatory Commission never communicated any formal determination to the Colorado Department of Public Health and Environment, and state officials only learned of the problem from a third party. 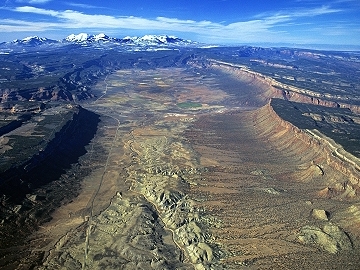 “The NRC didn't even copy us on that letter. The way they went about this was really inappropriate and unprofessional,” Smith said.

State officials dispute Telluride-based Sheep Mountain Alliance's contention that the application process for the Piñon Ridge uranium mill should be reopened to include “a proper public hearing,” or that they must overhaul the system they use to grant licenses for uranium mining operations.

“The NRC is criticizing the State of Colorado in the press – even though it still has not issued a formal determination in the matter,” Smith said. “This disappointing situation has caused severe damage to the state's previously productive working relationship with the Nuclear Regulatory Commission. For a federal agency to come along at this late date and appear to muddy the waters is an outrage to all the community members, stakeholders and others who took the time to participate in the public process regarding the radioactive materials license.”

Sheep Mountain Alliance representatives say the U.S. Nuclear Regulatory Commission sent its lawyer a letter last week that corroborates the group's concern with how the Piñon Ridge process was conducted.

“Intervention by the NRC is unusual,” Sheep Mountain Alliance attorney Jeffrey C. Parsons said in a prepared statement Wednesday. “NRC rarely comes down so clearly and explicitly stating that a state's public review process was flawed. The CDPHE ignored our concerns over this; they went ahead and issued the mill license. The NRC has irrefutably substantiated our concerns.”

The Piñon Ridge Uranium Mill, proposed by Canada-based Energy Fuels Inc., would be built between the San Miguel and Dolores rivers on an 880-acre parcel in scenic Paradox Valley.

Sheep Mountain Alliance representatives worry the mill could contaminate the area's groundwater and air. They also cite concerns about the mill's socioeconomic impacts and its effect on wildlife.

Energy Fuels executives say the mill will create scores of well-paying jobs in the hardscrabble region.

“Colorado is an 'agreement state' whereby the sole authority for the licensing of uranium mills was granted to the state by the NRC itself, and continues to reside with Colorado,” Energy Fuels stated. “The NRC has no jurisdiction or authority to issue, amend, or revoke mill licenses in Colorado, including the license for Piñon Ridge. The NRC's primary remedy is to work with Colorado to correct any perceived deficiencies in Colorado's laws and regulations. While the Company and Colorado dispute that any deficiencies exist, these corrections would only apply to future radioactive materials licenses issued by Colorado, and not past actions like the approval of the Piñon Ridge Mill.”

“The NRC has confirmed CDPHE failed to provide the public with a meaningful opportunity to review the ... permit,” Parsons said. “We need new and objective eyes to look at this mill proposal.”

The Colorado Department of Public Health and Environment responded to the US Nuclear Regulatory Commission in a letter sent Friday, March 16. A copy of the letter is available at: http://10.1.0.61/release/2012/attachments/responsetoNRC.pdf