“Our region's economy depends upon river flows that can support recreation and tourism,” said Arvin Ramgoolam, owner of Rumors Coffee and Townie Books in Crested Butte.

“The state should be working to protect and promote jobs out here rather than pursuing dead end projects that will rob the resources on which our jobs depend,” Ramgoolam said. 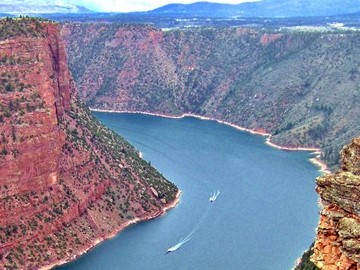 The Colorado Water Conservation Board recently funded a "project exploration committee” that is considering the Flaming Gorge pipeline. The task force held its first meeting Jan. 12 in Silverthorne, and is scheduled to continue meeting to discuss the pipeline through the end of the year.

Aaron Million, president of Wyco Power and Water Inc. in Fort Collins, remained undeterred and said he plans to improve the application and resubmit it to FERC for approval.

The multi-billion-dollar project would suck 240,000 acre-feet of water a year from Flaming Gorge Reservoir, along the border of Wyoming and Utah, and ship it to Colorado's increasingly thirsty Front Range. An acre-foot of water is about enough for two families to live off of for a year.

The proposal requires FERC approval because it is being pitched as part of a hydropower system but opponents have argued that pumping the water over the Continental Divide to reach Colorado's sprawling cities along the Front Range would ultimately spend more energy than the project would produce.

Critics say the pipeline would drain 81 billion gallons of water each year from the Green River, a tributary of the already stressed Colorado River, and the state of Colorado projects the pipeline could cost as much as $9 billion to build, though other estimates have come in much lower.

A Western Resource Advocates study said the pipeline would deprive the Green River of almost a quarter of its flow, and result in a $58.5 million annual loss to the region's recreation economy. The same study said it would produce the most expensive water ever seen in Colorado.

Protect the Flows, a coalition of over 370 businesses who depend upon the Colorado River system, says it is rounding up resolutions opposing the pipeline from local governments. "This is a victory for Colorado's economy, the West Slope's Economy, water users and our communities. It's time to get past this proposal once and for all," Mesa County Commissioner Steve Acquafresca said.

I would also motivate just about every person to save this web page for any favorite assistance to assist posted the appearance. สมัครสล็อต

You have a genuine capacity for composing one of a kind substance. I like how you think and the way you speak to your perspectives in this article. I concur with your mindset. Much obliged to you for sharing. 188bet app

I just couldn't leave your website before telling you that I truly enjoyed the top quality info you present to your visitors? Will be back again frequently to check up on new posts. How a Stock Market Overreacts to News

Thank you for the post. I will definitely comeback. Copy Paste Income Reviews

This article gives the light in which we can observe the reality. This is very nice one and gives indepth information. Thanks for this nice article. How a Stock Market Overreacts to News

I want you to thank for your time of this wonderful read!!! I definately enjoy every little bit of it and I have you bookmarked to check out new stuff of your blog a must read blog! How a Stock Market Overreacts to News

Very useful post. This is my first time i visit here. I found so many interesting stuff in your blog especially its discussion. Really its great article. Keep it up. Abraham Kallon Review

I have to search sites with relevant information on given topic and provide them to teacher our opinion and the article. How to fix and avoid

I have express a few of the articles on your website now, and I really like your style of blogging. I added it to my favorite’s blog site list and will be checking back soon… How to fix and avoid

I’m happy I located this blog! From time to time, students want to cognitive the keys of productive literary essays composing. Your first-class knowledge about this good post can become a proper basis for such people. nice one How to fix and avoid

You re in point of fact a just right webmaster. The website loading speed is amazing. It kind of feels that you're doing any distinctive trick. Moreover, The contents are masterpiece. you have done a fantastic activity on this subject! Abraham Kallon Review

Yes i am totally agreed with this article and i just want say that this article is very nice and very informative article.I will make sure to be reading your blog more. You made a good point but I can't help but wonder, what about the other side? !!!!!!THANKS!!!!!! goldco

Thank you for the update, very nice site.. 해외스포츠중계

Thanks for the valuable information and insights you have so provided here... 스포츠사이트

Great info! I recently came across your blog and have been reading along. I thought I would leave my first comment. I don’t know what to say except that I have. onboard weighing systems

Thanks for the post and great tips..even I also think that hard work is the most important aspect of getting success.. solicitor in surbiton

Thanks for posting this info. I just want to let you know that I just check out your site and I find it very interesting and informative. I can't wait to read lots of your posts. private jet hire

I am happy to find this post very useful for me, as it contains lot of information. I always prefer to read the quality content and this thing I found in you post. Thanks for sharing. jet card

I was looking at some of your posts on this website and I conceive this web site is really instructive! Keep putting up.. jet card

I learn some new stuff from it too, thanks for sharing your information. premium dog food uk

I appreciate everything you have added to my knowledge base.Admiring the time and effort you put into your blog and detailed information you offer.Thanks. reiki therapy

Superbly written article, if only all bloggers offered the same content as you, the internet would be a far better place.. Plumbers

Most of the time I don’t make comments on websites, but I'd like to say that this article really forced me to do so. Really nice post! sound bath near me

I just couldn't leave your website before telling you that I truly enjoyed the top quality info you present to your visitors? Will be back again frequently to check up on new posts. Dispersionsfarbe kaufen

This is very educational content and written well for a change. It's nice to see that some people still understand how to write a quality post.! janitorial services near me