RealAspen News and Community Content Feed
By Troy Hooper
Real Aspen – February 16, 2012
Asked why he was Colorado's lone congressional holdout in calling for the extension of the wind tax credit, U.S. Rep. Doug Lamborn answered his "preference is to help industry grow by reducing federal regulations and mandates as opposed to carving out special interests in the tax code.”

There is no question the Republican who represents central Colorado has been trying "to help industry grow by reducing federal regulations and mandates" as he has been a persistent thorn in the Environmental Protection Agency's side since first getting elected in 2006. But the congressman's suggestion last week that he could not support the federal wind-production credit because it tinkers with the tax code doesn't jibe with how he has treated fossil fuels. Over and over again, Lamborn has voted to protect subsidies and special tax breaks for oil and gas. 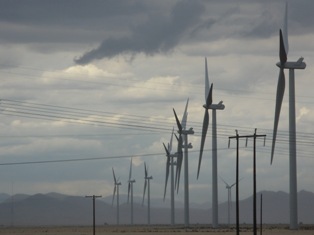 The closest support Lamborn has shown for the development of wind energy may be his push to mine rare earth minerals, which generate radioactive waste and are used to manufacture wind turbines.

Lamborn's spokeswoman did not return a message seeking comment for this story but he previously told the Colorado Independent he supports wind energy as part of an “all-of-the-above energy plan.”

The congressman has been a good fossil fuel foot soldier. He is the architect of the Pioneers Act, which would fast-track more oil shale exploration in Colorado, Utah and Wyoming.

The Bureau of Land Management, however, is recommending a much different plan. Whereas Lamborn wants to open up to 2 million acres of public land in the three states for oil shale exploration, the BLM believes a half-million acres would do.

Adding to the drama of dueling blueprints for energy exploration is House Speaker John Boehner, R-Ohio, who announced he plans to use oil shale revenues to rebuild the nation's crumbling transportation infrastructure.

New numbers from the Congressional Budget Office, however, reveal oil shale leases under the Pioneers Act would total less than $100,000 annually over the next decade. Infrastructure improvements are estimated to cost $40 billion.

“We've heard of Herman Cain's 9-9-9 proposal; oil shale is the 0-0-0 proposal — no energy, no revenue, and no jobs,” Polis said. “It's worth research, and there are plenty of research leases out there, but it isn't ready for prime-time. We shouldn't risk thousands of real Colorado jobs in agriculture or our recreation economy on a giveaway to oil companies. Congress shouldn't hand two million acres of public lands to oil shale speculators and lock these areas away from Colorado families, ranchers and recreation jobs.”

Industrial scale oil shale development could require as much as 150 percent of the amount of water the Denver Metro Area consumes annually, according to Bureau of Land Management estimates. Republicans, such as U.S. Rep. Scott Tipton of Colorado, recently voted against an amendment to Lamborn's bill that would have required the U.S. Geological Survey to complete more study of the effects of oil shale exploration on water resources before allowing commercial development.

“Oil shale is technologically unproven for commercial development and its water demands not fully studied,” said Colorado Wildlife Federation Executive Director Suzanne O'Neill. “It is only common sense that we pursue a research-first approach instead of fast-tracking leasing of additional federal public lands for hoped commercial development that could impact further the lands and waters Coloradans use for economically significant hunting, fishing, and other outdoor recreation.”

Matthew Garrington, co-director of the Checks and Balances Project, released a video this week of what he calls the "oil shale boondoggle" that is the centerpiece of an online ad campaign in the National Journal, Politico, The Hill and the Colorado Springs Gazette:

As Lamborn focuses on oil shale, Sens. Michael Bennet and Mark Udall, D-Colorado, are amplifying their calls for Congress to extend the wind payroll tax credit. Bennet filed an amendment to the transportation funding bill today that would extend the wind-production tax credit for one year.

"Extending the wind energy tax credit is a policy move that can give Coloradans and Americans a great return on investment — a stronger economy, more local jobs and more affordable power for our homes," Udall said in a statement, which noted that Danish energy company Vestas Wind Systems employs over a thousand people in four manufacturing facilities in Colorado. "With employers like Vestas willing to invest in Colorado, Congress needs to act well before the deadline and give these employers certainty to plan ahead — otherwise those jobs will move to other countries. Failing to extend the production tax credit for wind energy will threaten the industry's growth and Colorado jobs, and I'll continue to push my colleagues for a better solution where Colorado keeps our jobs."

I have read a few of the articles on your website now, and I really like your style of blogging. I added it to my favorites blog site list and will be checking back soon. Please check out my site as well and let me know what you think. 123movies websites