RealAspen News and Community Content Feed
By Real Vail
Real Aspen – February 11, 2012
The Winter Teva Mountain Games presented by Eddie Bauer attracted some of the world's best athletes to Vail as a cadre of Olympians, national champions and young phenoms lined up to compete in nordic skiing and mixed climbing events on day one of the three-day festival on Friday.

Zimmerman (Bozeman, Mont.), a four-time national champion and member of the 2006 U.S. Olympic team, had a flawless race in the 10K at the Vail Nordic Center, winning comfortably with a time of 22:48. Josh Smullin (Steamboat, Colo.) finished in second place at 23:03 and Lars Flora (Anchorage, Alaska) rounded out the podium in third place at 23:15. 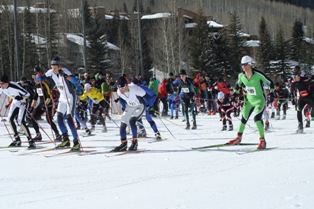 Dussault (Gunnison, Colo.), a teammate of Zimmerman's on the 2006 Olympic team, proved her strength by out-skating Morgan Arritola (Ketchum, Idaho) at the line and winning by just one second at 25:19. Lenka Palanova came in third place at 25:52.

For complete results and a schedule of weekend events, go to the Teva Games website.

Great job for publishing such a beneficial web site. เล่นบาคาร่าสด

Thanks for posting this educative writeup. I do appreciate your efforts. baccarat

Your web log isn’t only useful but it is really creative too. บาคาร่าออนไลน์

This site is extremely instructive ! Keep on setting up! เว็บบาคาร่า

Good write-up. I absolutely appreciate this website. Thanks! ค่าคอมมิชชั่น บาคาร่า