After decisive wins in Missouri, Minnesota and Colorado, the former Pennsylvania senator could prove to be a game-changer in the drawn-out conservative contest to pick a challenger to President Barack Obama.

Santorum and Romney were neck in neck in Colorado, forcing cable TV news teams to work into the wee hours on the East Coast, until state GOP chair Ryan Call told CNN that Santorum was projected to win Colorado. It was an intriguing moment that could flip the script in the Republican race as Romney struggles to win broad conservative support. 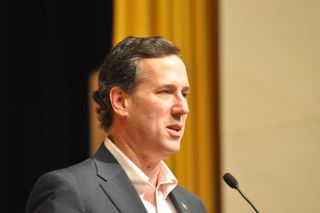 Santorum's popularity in the Centennial State surged in the days leading up to the caucuses after he impressed voters in meet-and-greets and townhall-style conversations across Colorado where he feverishly campaigned all the way up until the caucuses convened.

Eagle County Republicans, according to the Vail Daily, supported Romney.

Conservatives on the Western Slope were buzzing about Santorum after his visit to Montrose over the weekend and he was the main attraction at the Colorado Energy Summit in Golden. There, he vowed to give away public lands to private business, called climate change "a hoax," and lamented how environmental protections are getting in the way of industry.

Romney's unraveling in Colorado is significant. Pollsters predicted he would easily win the state, especially considering his GOP caucus victory in 2008. He covered a lot of ground in Colorado, stumping in Grand Junction, Loveland and Denver. Romney even chose to stay in Denver on Tuesday night with the hopes it would be the one state he could count on winning. It didn't happen. Now he has real work to do if he is to remain the Republican frontrunner.

Speaking to a crowd in Denver before he results were known, Romney classily congratulated Santorum on his big night before strikng a conciliatory tone.

"We are going to stand united as a party to defeat Barack Obama and restore the values that make America the greatest country on Earth," Romney said.

No delegates were actually won Tuesday as caucus goers were only choosing delegates to attend a party convention later this year and the Missouri contest was a nonbinding primary. So it's not the end of the world for Romney. But it's a setback for him that also further opens the door for Paul who placed second in Minnesota and continues to rack up delegates. Paul's popularity in Colorado may not have been reflected in Tuesday's outcome as many of his supporters in the state are independents and liberals who didn't participate in GOP caucuses.

Caucus turnout in Colorado appeared to be lower than in 2008. Despite the state GOP chair's claims that state conservatives are enthusiastic about 2012, initial counts showed numbers were down.

Still, Santorum couldn't be happier with how the night turned out.