Still, every little bit helps after a dry December that left most of the state's ski resorts playing serious catch-up in January. Snowpack in the Colorado River basin, for instance, is still only about 70 percent of the annual average for this time of year.

A few inches of new snow were supposed to fall during the day today in Vail, but skies remained dry up until about 7 p.m., when light snow finally started falling in West Vail. Opensnow.com is still calling for 1-3 tonight and another 1-2 inches Friday in Vail and Aspen. 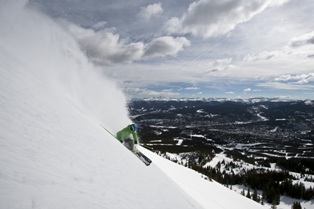 Even those amounts of snow will be a welcome refresher after a largely dry week. Enough snow fell last weekend, however, to continue to allow Colorado resorts to open more terrain after a slow start to the season.

Vail today opened the surface lift serving Inner and Outer Mongolia Bowls so that all seven Back Bowls are finally open for the season. Vail now has 28 of 31 lifts operating and 4,437 of 5,289 acres open for snow riding.

Beaver Creek on Saturday will open portions of its popular Royal Elk Glade and Upper Stone Creek Chutes double black diamond and EX terrain. The resort reports that January snowfall was 5 percent above its monthly 11-year average, allowing Beaver Creek to increase its terrain to 1,712 acres. The mountain sis now 94 percent open with all 25 lifts operating.

Breckenridge on Wednesday opened its Imperial Express SuperChair so that all 31 lifts are now operating. Another 250 acres of expert terrain can now be accessed, including Imperial Ridge and the Peak 7 Bowl.

The Imperial Express SuperChair, installed in 2005, tops out at 12,840 feet and is North America's highest chairlift. The lift provides access to three high-alpine bowls and hike-to access to the popular Lake Chutes and Snow White areas of Peak 8.

Also on Wednesday, Telluride took advantage of nearly four feet of new snow over the past two weeks to finally open Black Iron Bowl and the Gold Hill Chutes.

Snow riders can access everything from Electric Shot to Roy Boy. Also Black Iron Bowl to Mountain Quail, Gold Hill Chutes 1, 2, 7 & 8 along with the Gold Hill Stairs and Chute 9 have all opened.

Southern resorts such as Wolf Creek, Durango Mountain and Monarch are supposed to do better than ski areas in the northern-central mountains. Also, ski areas on the east side of the Continental Divide, including Echo Mountain and Eldora, should do well.

The storm moves out by Saturday, leaving dry conditions through the first part of next week.

It really looks great, I've seen many other posts, that's the info I needed, thanks for sharing.

If any of you is looking for an affordable printing service, check out this https://www.digitekprinting.com/vinyl-banners and see their services. I’ve worked with them for invitations may it be online or in paper and never once did they disappoint me.